After four years, The Punch is being subsumed into part of News Ltd. Is it about time? Plus a distinct lack of fact-checking at The AFR.

The Punch KO’d After four years, Australian politics and current affairs blog The Punch is being subsumed into parent company News Ltd. As the final post on its website says:

“A lot has changed since we launched in 2009 in the way Australians consume news and opinion.

“The little Punch team joined the much bigger integrated News Limited team last year and now our Punch content is joining in too. Punch posts will now be published under the new brand Punch Breaking Views across News Limited’s huge digital news network.”

You’ll now be able to see all your favourite posts about bogans, racism and angry mums on news.com.au and all the state specific sites such as dailytelegraph.com.au and perthnow.com.au. Crikey‘s First Dog on the Moon wants it on record that he un-subscribed from The Punch‘s newsletter last week and is sure this was the knock-out blow.

Asleep at the wheel at The AFR. In the current Boss magazine from The Australian Financial Review, the paper’s Chanticleer columnist Tony Boyd has an interesting comment piece on the performance of the Rio Tinto board over the Alcan aluminium investment and the Mozambique coal deal, both costly and embarrassing adventures for the world’s third-biggest mining house. But Boyd also talked about an “iron ore mine in Ghana” and “the Ghanian mine”, which “has since struck trouble”.

Is that the iron ore mine in Guinea (Simandou is its name) which was this week reported to be slipping in the pecking order at Rio and would soon be just another good idea? Who was proof-reading the Boyd column in Boss? And in today’s Chanticleer column in The AFR, Boyd described yesterday’s profit report from Myer as the retailer’s “annual results”. They weren’t — they were its interim figures, which were referred to a few paragraphs later when Boyd wrote: “On Thursday it [Myer] released its half-year profit result.” — Glenn Dyer

Front page of the day. A great front page from proud Argentinian newspaper Ole, who couldn’t resist reporting on their new Pope with a football reference. “The other hand of God,” reads the headline, linking Pope Francis back to the other Saint of Argentina, Maradona. 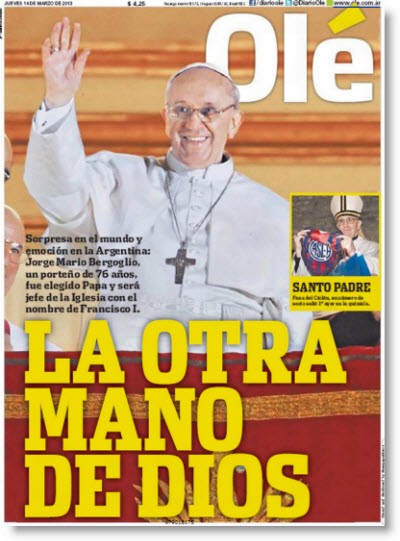 Video of the Day. Paper is not dead yet. Even super smug iPad users need it sometimes … 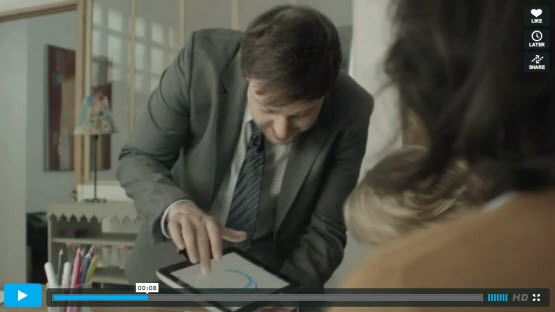 I thought Maradona was the back-hand of God?