How do you beat Kevin Rudd? LNP farms out campaign to kids

Kevin Rudd's opponent for the seat of Griffith at the next election has roped in outside help for his campaign. He's asking students from QUT's Business School to help him attract more younger voters.

Universities are supposedly hot beds of radicalism stuffed with pampered left-wing academia. But one Queensland university is working hard to bring down Kevin Rudd.

At the Queensland University of Technology’s Business School, students are developing a campaign to encourage young voters to support the Liberal-National Party’s candidate for Griffith, Bill Glasson. It’s all part of their course assessment.

“It smelled fishy but I figured that our work would not be shared with the client and it was simply a real-life example,” wrote student “Anidav” on an Australian politics forum. 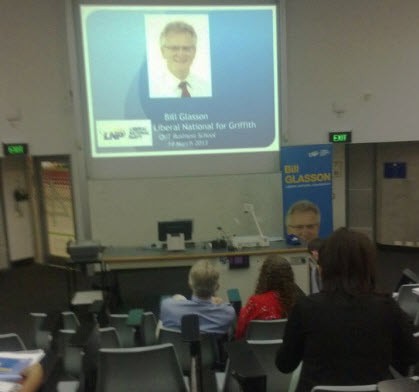 That is until Glasson appeared at the lecture to discuss Rudd’s weaknesses and how students could best frame his campaign. An opthamologist and former president of the Australian Medical Association, it’s Glasson first run at politics.

According to Anidav, Glasson told the class the “the leadership quarrels of the Labor Party doesn’t connect well with young people” and instead Glasson was interested in how to best portray the former foreign minister as a “Big Fish in a Small Pond” who flies off to international events and ignores his electorate:

“His Young Liberal helpers also handed out pamphlets and gave talks about how the LNP uses social networking. This made it seem like we were more involved in the campaign, almost too close. So then our lecture ended with: ‘assignments I think are the best I will pass onto our client.'”

It’s understood students can choose if they’d like their campaign plan to be handed over to the LNP.

“University students are involved in political clubs and politics day-to-day. But I would have thought, as part of the curriculum, that it would strive for a balance,” they told Crikey.

Perhaps, Rudd’s office suggested, students should be asked how they feel about not getting the NBN: “I’d be interested to see what the student population’s reaction to that would be.”

Last month, as Crikey first revealed, Glasson backflipped on his support for the NBN after years of publicly encouraging the policy and working as one of the NBN’s “broadband champions”. Glasson’s office is yet to respond to Crikey‘s calls; we’ll update once they have.

Rudd currently holds Griffith with a sizeable 8.4% margin. But with the projected swings against Labor, students may hold out hope of getting Glasson over the line.

The executive dean of the QUT Business School, Professor Robina Xavier, has just sent this response to Crikey:

“QUT’s Business School links its students with representatives from a broad range of industries to ensure student coursework is relevant in the ‘real world’.

“Once in the workforce advertising professionals can expect to work for a vast range of clients, some of whose philosophies, products and services they will be supportive of and some they will not.

“The completion of an assignment for third-year advertising students is an exercise in channel planning, not in politics, and will not involve the development of creative content.

“As is always the case with this type of coursework, the best assignments are offered to the “client” but only with the approval of the students concerned.”

I would actually wonder if there isn’t a policy forbidding this kind of political activity in the university’s courses, I know at our university there were strict rules about campus elections regarding where and when this could be brought into the lecture halls. I can’t imagine that those policies were not written to encompass all political activity.

This is absolutely outrageous! What has it got to with a “business” school?

Not only that, is this not an political donation, that must be declared? It’s number of students x HECS fees ea. at minimum.

This proves that QUT is an absolute mickey mouse institution and that business schools in general are not a valid part of a universities’ curricula!

Is his name Gleeson or Glasson?

I don’t think it is appropriate to judge QUT until we have its side of the story. Why didn’t the reporter report QUT’s position?

This is rare: a scam Qld conservatives have never tried before, even in the Sir Joh years.

As long as the students realise that under Glasson’s party it will always take longer to upload/download their usual inanities on social media.