Nine rains on a <em>Parade</em> of quality drama

Parade's End is one of the most formidable shows to come out of Britain, writes arts critic and cultural commentator Peter Craven. So how did Channel Nine screw it up so badly? 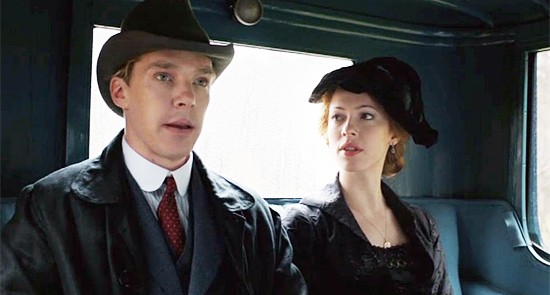 The news that Channel Nine has not only bombed with the resplendent Tom Stoppard adaptation of Ford Madox Ford’s Parade’s End but actually relegated it to one of its subsidiary channels, where, presumably, it will shine unseen, beggars belief.

Parade’s End is one of the most formidable British TV shows for a long time: it is superbly composed, it has a script by Britain’s most celebrated living playwright, and it has at its centre a performance by Benedict Cumberbatch at once rivalling and recalling the finer things done by the Ralph Richardson/Michael Redgrave generation. How on earth could Channel Nine stuff all this up out of post-Downton Abbey greed?

That, surely, is the reason for the fatal attraction in the first place. Downton Abbey, with a script by Julian Fellowes (the man who wrote Gosford Park for Robert Altman and revised Mary Poppins for Richard Eyre and Cameron Mackintosh), has Maggie Smith, one of the greatest actresses alive, leading a cast who could do Shaw or Wilde standing on their heads. The imaginative soap made the world fall in love with Edwardian clobber like nothing since Cecil Beaton and My Fair Lady.

It’s not surprising, however, that Channel Nine, with little in the way of concerted advance publicity for Parade’s End and the decision to show it on a Wednesday night, should have reached an audience of only 400,000 or so. As with Downton — but with sombre bells on — the natural audience for Parade’s End was going to be made up of migratory birds from the ABC. Channel Nine should obviously have shown the Stoppard/Madox Ford epic on a Sunday, probably in hour-long separate episodes, either before or after Downton (which, as it happens, has well and truly jumped the shark).

Parade’s End is a remarkable piece of television that takes its bearings from one of the most formidable works of fiction, arguably the most formidable to be written by an Englishman. The book, which takes place between World War I and the coming down of the Berlin Wall, is utterly remarkable not least because it combines a high level of pattering social comedy with rhetorically ravishing, formally innovative excursions into interior monologue and virtual stream of consciousness — some as the bullets whiz and the mud slides — so that the upshot (mad as it sounds) it a bit like a cross between Evelyn Waugh and James Joyce.

It’s true that there’s an aspect of Parade’s End, for all its loose and baggy grandeur, that tilts towards the factitious — a kind of lean towards notions of nobility and squirearchy, a kind of rhetorical glow of mythology (not a million miles from Waugh’s Catholic Torydom) that sometimes makes you wonder if the world is being lit, every so often, with surmise rather than truth.

None of this stops Parade’s End from being the most dazzling and compelling and comprehensive book by the author of The Good Soldier (the Ford Madox Ford book that deserves its reputation as the most jewel-like, least imperfect, novel in the language). And the TV Parade’s End — which Channel Nine has squandered so stupidly — was a rather magnificent advertisement for the book while instantiating a significant fraction of its power in deeply filmic terms. It is compositionally very beautiful, moving at a quiet pace, but growing steadily in portent and depth of portraiture.

“Benedict Cumberbatch is the centrepiece of a vibrantly realised, beautifully poise piece of television, which has claims to being seen as a work of art.”

The script is a free adaptation with a fierce knife edge of idiom, with superbly spot-lit individual characters: Rufus Sewell as a demented vicar who talks dirty; Anne-Marie Duff as his fluttering Scottish wife who takes her love elsewhere. It is, in fact, as grand a British ensemble as you could dream of mustering. There is the magnificent Miranda Richardson as the young girl’s mother and Roger Allam, one of Britain’s finest actors, as a blimp of a general who isn’t just. We also get Rupert Everett — bearded, sombre and straight — as main character Tietjens’ brother. As his wife Sylvia, Rebecca Hall, the daughter of Sir Peter, whom we’ve seen in Woody Allen’s Vicky Cristina Barcelona and Ben Affleck’s The Town, wins you over by a principle of progressive conquest. For a long, irritating moment you think she’s acting like Scarlett Johansen at her worst until you realise that the petulance and the narcissism and the indomitable self-regard is a function of the actress’ self control and is capable of being mitigated and shaded and rendered mercilessly human in a hundred ways. This is a superb portrayal at the very edge of sympathy, magnetic and repellent, a characterisation by an actress of great sweep and subtlety.

Then there’s Cumberbatch as decent, patient, blind honourable Tory squire Tietjens staring at the sorrows and splendours of destiny like a midday sun of madness and renunciation. It’s an astonishing performance not least because it seems somehow to take on the authority of a lost generation of great acting. He uses his voice so rich and deep and subtle like the grand piano of one the great actors of the Olivier generation. Yet his Tietjens is character acting carried to a point where authenticity transcends itself and turns into something heroic. This is a performance that ranks with Roger Livesey in Michael Powell’s The Life and Death of Colonel Blimp — a parallel work, as it happens —  or the very best work of Alec Guinness.

It is extraordinary that a performance as distinguished as this — a more significant performance, let’s say, than Daniel Day Lewis’ admirable turn in Lincoln –– should be thrown away by a commercial television network negligently ignorant of the diamond it somehow ended up with in its hand.

And Cumberbatch is not an isolated virtuoso. He is the centrepiece of a vibrantly realised, beautifully poise piece of television, which has claims to being seen as a work of art. And which has — in any case — an obvious appeal to the more or less vast hoard of people who have an appetite for seeing love and war articulated by a great dramatic writer, performed by the best British actors alive, brought to life with a very credible sense of loss and pain and human worth.

Channel Nine execs should hang their heads in shame. The ABC should wonder what crime against nature it committed by not securing Parade’s End. People who care about words and images should order the DVD set and think about reading one of the weirder and more wonderful books to come out of World War I and the sorrow and pity of the 20th century.

Couldn’t agree more. I knew I was going to be out this Wednesday night so set up to record this weeks episode as soon as last weeks was over. I sat down with great anticipation last night only to find I had recorded Sherlock Holmes. I immediately went online and ordered the DVD having already downloaded the complete works of Ford Maddox Ford to my kindle after watching last week.

Having watched Parade’e End previously (courtesy of…well…), I was astounded to see 9 picking it up.

Downton Abbey it is not!

Hardly a fit for the normal demographic of 9, one would have thought…

I seem to remember they had the same problem with “The West Wing”: they kept shifting it about, hacked the episodes to fit in ads, and had dire ratings.

Straight off to purchase a DVD, or stream if I could.

Channel 9 should never have taken it on, it’s a quality show – channel 9 and the other commercials pump out unwatchable rubbish week after week. Should’ve been on the ABC or SBS where quality exists and the managers know how to bring it to air in an orderly manner.

Agree wholeheartedly with above – was mesmerised by the first episode (despite the ads) and then missed it the second week because of the channel/time shift. Just another reason why we don’t bother with the commercial TV channels – DVDs all the way!