A richer Murdoch stands on the cusp of two big wins

Rupert Murdoch may well see off attempts to impose any sort of media regulation in the UK and Australia -- and see off the Prime Ministers who proposed it. Glenn Dyer and Bernard Keane report. 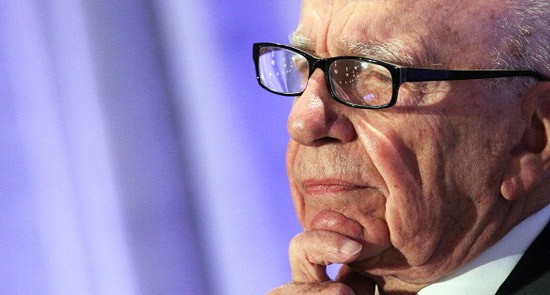 Next week could deliver two major wins for Rupert Murdoch, barely 18 months after the News of the World phone hacking scandal crashed around his head, with the defeat of attempts to tighten newspaper regulation in both the UK and Australia. It would be a victory that would add immensely to his reputation for being the media mogul you cross at your peril.

The chances of passage of the government’s self-regulatory proposal for print and online media, along with the rest of federal Communications Minister Stephen Conroy’s media reform package, appear problematic, as crossbenchers are wavering and the Greens backed a June reporting deadline for the Senate committee examining the five reform bills introduced yesterday. The government wants them passed next week and has said it will dump the reforms if they don’t make it through in that time.

Murdoch and his local representatives like News Limited CEO Kim Williams know perfectly well Conroy’s self-regulation proposals for journalistic standards pose no threat to their newspapers; their real concern is the public interest test proposal, which would stymie News Ltd from offsetting its dying newspaper business with expansion into growth assets like the other half of Foxtel.

In the UK, Prime Minister David Cameron has walked out on negotiations with Labour and his coalition partner the Lib-Dems over implementation of the Leveson Report recommendations, and will bring on a vote on Monday night/Tuesday morning our time. The key issue between the parties is the legislative status of the body overseeing a revamped Press Complaints Commission. Labour and the Lib-Dems support a legislatively protected body, while Cameron does not. The Commons vote over the issue is expected to come down to the wire and could rely on which way crossbench MPs vote.

A win for Cameron would be a win for Murdoch, with future government ministers able to wind back press oversight at will. However, a loss for Cameron would also be a win for Murdoch, as it would further destabilise Cameron’s troubled prime ministership. Like Prime Minister Julia Gillard, Cameron is now the subject of regular leadership speculation. Murdoch has backed London mayor Boris Johnston to replace Cameron, but the most recent speculation has centred on Home Secretary Theresa May, who has been pushing her leadership credentials as the team of Cameron and Chancellor George Osborne have encountered deep economic problems, including a likely third return to recession. Cameron’s fate is seen to be tied to next week’s budget, with the pressure on to show that his government has a plan B for the economy given austerity has delivered an economy in reverse and a growing, not shrinking, debt problem.

The campaign against tighter media regulation has been every bit as over the top in the UK as it has been here. Leveson and his staff have been attacked and smeared and a newspaper-funded “Free Speech Network” ran ads linking press regulation to dictators (the local Telegraph can’t even smear with originality). News International has been forced to keep a relatively low profile as its executives, journalists and editors have formed a procession into and out of UK police stations to be charged with offences relating to phone hacking and bribery, but media proprietors such as the Mirror Group and the Barclay brothers (owners of the Conservative-aligned Telegraph) have led the charge.

The British newspaper groups claim the push to back the regulation by statute would crimp press freedom, forgetting it was the actions of the Murdoch empire and his newspapers that damaged the notion of press freedom and led to calls for tighter regulation. The cover-up at News International, the weak oversight by senior executives, including James Murdoch, and the control of public figures through co-option or threats added to the feeling that the media can’t be trusted.

“Despite over 100 journalists, editors, executives, police and other public officials being charged in relation to phone hacking, bribery or conspiracy, the UK newspaper industry continues to insist it should be be allowed to continue to self-regulate.”

But the phone hacking scandal has, indirectly, been a boon for Murdoch financially: it forced the non-Murdoch board of News Corp to take the step of splitting the company into two groups: the faster-growing, more profitable broadcast and content one to be called Fox Group, and the newspaper/publishing (and pay TV in Australia) one, which will keep the old News Corporation name. That split has helped drive the News Corp share price to a new high of $US321 overnight (which is more than double the lows it fell to after the phone hacking scandal erupted in mid-2011), assisted by the spending of more than $US6 billion in a massive share buyback that has enriched Murdoch, his family and those shareholders clever enough to play his game. These are the reasons Forbes magazine reckons the value of his fortune has more than doubled to over $US11 billion.

The phone hacking scandal, though, is not even close to finishing. London police say they have opened a new inquiry into phone hacking at another newspaper and have arrested four journalists, all now senior editors or former senior editors, all of whom worked at the Sunday Mirror back in 2003 and 2004 when police allege the latest hacking took place. “This conspiracy is being treated as a separate conspiracy to the two being investigated at the now defunct News of the World newspaper,” police said. “In due course officers will be making contact with people they believe have been victims of the suspected voicemail interceptions.”

In Operation Elveden, which is investigating corrupt payments made by journalists on Murdoch’s Sun, a former police sergeant has been arrested and charged with leaking details of three investigations to the paper. That takes the number of people charged under Elveden alone to over 60. There’s also another police probe, Operation Tuleta, which is looking at computer hacking and other privacy breaches.

Despite over 100 journalists, editors, executives, police and other public officials being charged in relation to phone hacking, bribery or conspiracy, the UK newspaper industry continues to insist it should be be allowed to continue to self-regulate and that any legislated oversight is a Stalinist assault on free speech. And they might yet get their way.

And if Cameron and Gillard are both gone by later in the year, there’ll be a clear message to politicians everywhere: stay in Rupert’s good books at all costs.

Glenn + Bernard, & what if Julia isn’t gone by the end of the year? And what message would that send to politicians & the media?

There is only one certainty in life & that is that not long from now Rupert will be “dead, buried, cremated”.

He might be on the ‘cusp’ of turning another dollar but he is on the brink of losing another handful of bills too.
It looks like Operation Weeting in the UK have found a ‘deep throat/ess’, and the initial reports indicate there are at least another 600 illegal telephone intercepts the wallopers are now investigating.
Maybe a lot of his new found wealth will have to be employed to save some of the family silver.
How mortifying for the decrepid geriatric!

Why is that people like this win in life? It reminds me of the line in Gatsby, so true, the wealthy retreat into their vast wealth and leave other people to clean up after them.

Self regulation has been found to be nothing short of useless. News Corp have been hacking phones and lied for years about it. Editors and executives have been sacked, jailed and charged and the paper in the UK shut down in shame.
The High Court in Australia has found that staff have lied, distorted the truth and fabricated news articles.
The Australian Presss Council has found that they have run stories that are “gravely inaccurate, unfair and offensive”