What's wrong with our marine reserves? And other political issues of the day. 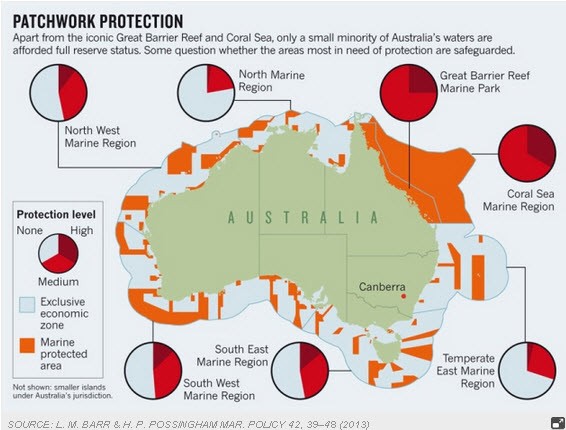 Nature refers to an assessment of the scheme published late last month that revealed flaws in the proposed network, which includes reserves in which all fishing is banned, as well as areas in which some fishing and other activities are permitted:

“The authors of the assessment — Lissa Barr and Hugh Possingham of the University of Queensland’s Centre of Excellence in Environmental Decisions in Brisbane — looked at how representative the proposed areas are. Protecting the full range of ecosystems off the coasts of Australia is a ‘fundamental requirement’ for a good reserve network, they say, or else habitats with distinct biology may be lost.

“What they found was troubling. Except for the high-profile Great Barrier Reef and Coral Sea regions, the protected areas are ‘far from representative’, they wrote. Of the 85 ‘bio­regions’ that the Australian government identified within its waters, 30 have the highest level of protection for less than 1% of their area. In four cases, less than 1% is covered even when areas of higher and lower protection are added together.

“A key problem is that the highly protected areas tend to be in deep water, whereas the most vulnerable ecosystems are usually closer to shore, on the continental shelf, says Possingham. He notes that many of the shallower areas in the north and northwest, which are under-represented in the plans, are suspected to have fossil-fuel potential. ‘One could wildly speculate that the Australian government is reluctant to forgo opportunities in that area,’ he says.”

A tango dancing bouncer. This Francis seems a bit different to your normal Pope. From Gazetta del Sud online comes this information:

“One of five children, he is the son of a railway worker. As a student he worked as a bouncer at a nightclub to support himself. He is known to like tango, and even had a girlfriend he danced with before becoming a priest. Bergoglio has so far lived in a modest flat, is said to cook his own meals, and gave up a car and driver in favor of public transportation.”

Could not give a rat’s. The extraordinary depiction of Communications Minister Stephen Conroy as Joseph Stalin will surely be leaving most Australians mystified. Stalin? Who the hell was he? And Mao — looks Chinese, but never heard of him. Castro. Isn’t he some dead fellow? And as for Kim, Mugabe and Ahmadinejad, what do they have to do with the price of bread? So let’s not get too worked up about the News Ltd campaign against some suggested changes to laws affecting the media. The public could not give a rat’s whatever the newspapers say.

And the Labor government well knows it or it would not be introducing legislation on the subjects at all. This is nothing more than an elaborate game of charades. With the ridiculously short deadlines Conroy has imposed, there is no chance at all of any legislative changes of substance being passed. Labor just wants to be able to say to that tiny minority who think that the subject is important that at least it tried to impose some restrictions on those evil media proprietors.

And politicians think they’re cute. The real, subliminal reason that politicians are attracted to babies for those campaign pictures becomes clear. They have so much in common. Consider this recent finding:

“Babies have a dark side under their cute exteriors, according to University of British Columbia-led study that finds infants as young as nine months embrace those who pick on individuals who are different from them.

“While previous research has shown that babies generally prefer kind actors, the new study — published by the Association for Psychological Science — is the first to suggest that infants condone antisocial behavior when it is directed at individuals who are dissimilar.

“‘Our research shows that by nine months, babies are busy assessing their surroundings, trying to determine who is friend or foe,’ says Prof. Kiley Hamlin of UBC’s Dept. of Psychology, lead author of the study. ‘One important way they make these distinctions, our study finds, is based on perceived differences and similarities.'”

Oh what a lovely coup. It had all the elements of those traditional African leadership takeovers. Wait until the leader is out of the country and then strike. The Northern Territory has set a new Australian benchmark on how to do things.

Thank goodness for Tim Sheens. A South African coaching the cricket team. A Kiwi instructing the rugby union Wallabies. A Dutchman running the Socceroos. Thank goodness for rugby league with Tim Sheens still at the helm. At least in one code national pride is still alive and well.

Boehner the socialist. “John Boehner is a man of colour. Wassup John?” Barack Obama once said, referring to the speaker’s sunlamp tan (though it might have been excess iron). But colour’s a funny thing. The Speaker of the US House of Representatives has recently taken to donning a Republican red shirt, and has even featured it in his Twitter avatar:

But of course, red has an entirely other meaning elsewhere, so the new look reminds one of someone else entirely … 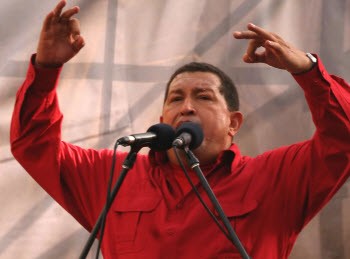 Wassup, John? No pasaran. (Thanks to Guy Rundle for this one.)

Why our Great Barrier Reef is the cheapest dump going

Australia becoming a barely habitable hell hole. But you knew that

Can you protect the environment while drilling for oil and gas?

For what it’s worth I reckon you’re right about those “rat’s arses”?
I don’t think your average punter is any more interested in what the media does than they are about politics, ’til it sneaks up and bites them.
Look at their regard for either – almost on par for “rat shit sandwiches”.
It looks like Conroy’s launched his “SS Swiss Cheese”?