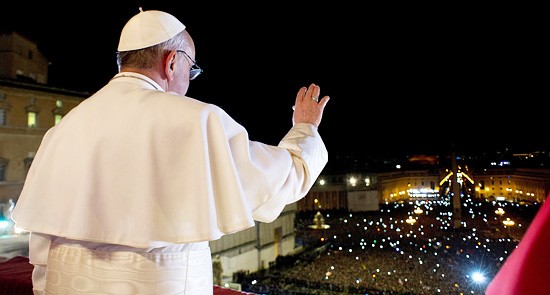 Our cardinal in Australia is a controversial figure who is widely liked and disliked at the same time, but no one is arguing he is not an educated, intelligent and clever man with lots of experience in the corridors of power. This can reasonably be said about anyone who has reached the high position of cardinal. Put crudely, one is not going to find too many bogans in the College of Cardinals.

Whatever our individual preferences for particular cardinals, the fact is that when they all sit together as electors in the Sistine Chapel, in conclave, we can know that it is one of the most astute, clever and highly experienced think tanks that the world can muster. More thoughtful than the United Nations, more experienced than Canberra, more diverse than the G20.

Compared to previous conclaves, this event had several weeks of meetings and gatherings between small and larger groups of cardinals. Of course, this drove the Curia nuts as they had put forward a very tight and hurried agenda to avoid precisely that. The last thing the Curia wanted was the cardinals talking to one another outside of their agenda. But the cardinals, as they flocked to Rome, insisted. They said we don’t want to be rushed. We want to get to know one another. We want to discuss the current and recent crises of the church. We want to talk, talk, talk. And they did. This was one of the first signs that this conclave would not be a rubber stamp to the Vatican bureaucracy.

They chose an outlier. He was not papabile. He was not one of the top 10 favourites. He was not on any of the favourites lists either in the media or the bookmakers. They chose a “good” pope. Not a prince, not a politician, not even a theologian but a pope for the poor. Why? It seems an inspired choice from a very alert group of electors who are clear that the future of the church is in asserting its moral leadership.

“Dare we hope for an authentic moral leader for our times? Could it really be Francis?”

Much of the recent commentary has been about the need for contemporary reform and for cleaning up Vatican bureaucracy but the strategic need for this unique institution is to get back to basics. To reflect the image of its founder.

This was a fast election. Faster than most since the average over the last 100 years has been three-plus days. We can speculate that this may indicate that the cardinals were on the same wavelength by the time they were locked in the chapel. Their weeks of meetings, discussions and private conversations had served them well. It was time. Time for the church to have a good pope. A moral leader, like a Mandela or perhaps a Pope John, who can, by actions not words, capture the imagination of the world. Simplicity. Clarity. Authenticity. These are the qualities that reflect their historical founder.

“I will be called Francis!” This is the first decision made by the new pope on his acceptance of election. Not Pius. Not John Paul. Not Benedict. But Francis, after Francis of Assisi. The choice of his regnum, the name under which he will rule, is the very first policy decision a new pope makes. So far, it’s the biggest single indication of his intentions. He chose the name of a poor but eloquent street-preacher. I suppose he could hardly have chosen the name of Jesus II but in choosing Francis he chose the very next best thing. No clearer message could be sent.

Except that there’s more. Saint Peter’s square is filled with thousands of Romans and pilgrims and tourists. The exclamation rings out across the square — “Habemus Papam!” (“We have a Pope!”) — and the crowd roars in expectation and enthusiasm for this thrilling moment. And lo and behold a figure emerges in just a white cassock. He gives a humble blessing and then stands quietly and silently before the city and the world. No histrionics. No regal arm-waving. No triple-tiara nor gold-encrusted mitre. Not even wearing the traditional ermine-lined stole of Europe’s last absolute monarch. Just the very minimum. A small white zuchetto on his head and the basic white cassock. Stunning in its debut. Nostalgic in its pastoral symbolism.

My favourite movie of 2012 was Searching For Sugarman and I was immediately connected to the extraordinary scene at the end of the movie when the lost artist, Rodriguez, appears before his fans in South Africa. Humbly he stands there for 10 minutes until the tumultuous applause of hope and appreciation from his followers finally calms down.

Dare we hope for an authentic moral leader for our times? Could it really be Francis?

Stay tuned to the most interesting show on earth: The Vatican.

Pell the martyr: first cultural warriors, now shadowy Vatican types are after him

sure not because i used the terms right wing religious b..ot ?

And cheer up cairns50

@cairns50 – if you are not interested then just ignore it. Spread your ill wishes somewhere else.

As for the actual story – well I’m no papist but from what I’ve read he might be a good, albeit conservative choice. The ostentatious displays of wealth & pomp always grated with me so I hope he also introduces a culture of humbleness and simplicity to the vatican – a bit like his chosen namesake. The church at the coal face runs on the smell of an oily rag so why should the vatican bathe in gold and mink?

“the fact is that when they all sit together as electors in the Sistine Chapel, in conclave, we can know that it is one of the most astute, clever and highly experienced think tanks that the world can muster. More thoughtful than the United Nations, more experienced than Canberra, more diverse than the G20.”

What a load of bollocks! You have simply equated the highest levels of Catholic-friendly theological literacy, and political acumen sufficient to ascend the Church hierarchy, as being synonymous with universal wisdom at the pinnacle of human experience.

Sorry, but that is an appalling over-simplification which cannot go unchallenged. Nobody would contest that there are very learned men amongst the Cardinals, some of them may even be very wise, but you go well beyond that by glibly assigning them unassailable experience and thoughtfulness simply by virtue of the office they hold.

Sorry, but I can’t agree. I would rather listen to the world’s top diplomats, central bankers, academics, lawyers, scientists – you name it – than one random Cardinal simply because he is a Cardinal. For a start, you’re more likely to be working on real merit as selection is made on merit and the pool of candidate includes the remaining 51% of population, and men who have active sexual relationships.