A Catholic prays: may Pope Francis live up to his name

Pope Francis will bring to the Papacy a rich heritage of openness, of willingness to walk alongside, of reflection and action in the world. At least that's what one Catholic prays. 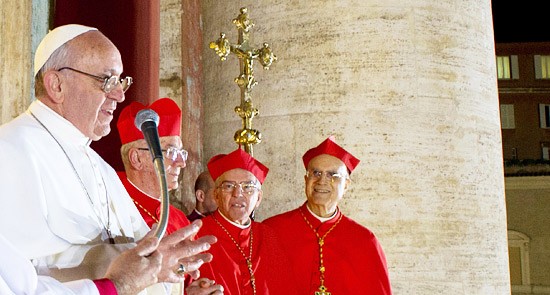 It was with joy that I woke this morning to hear that Argentinian Cardinal Jorge Bergoglio had been elected Pope, and had taken the name Francis. Francis is the first Jesuit and the first Latin American to be Pope.

The Jesuit founder, St Ignatius of Loyola, didn’t want any of the order’s priests to accept ecclesiastical office. Jesuits seek God in all things, centre their lives on Christ, and embrace communal poverty and an ethic of service. They’re also distinguished, as an order, for intellectual attainment and for translating the faith through inculturation, so that communities and cultures can make it their own.

In history, 17th and 18th century controversies over the Chinese Rites signified the opposition of the Vatican to the Jesuit desire to recognise truth in Chinese views of the divine. Today, Jesuits like Raimon Pannikar have faced questioning over openness to Hindu expressions of religiosity. One of the greatest Jesuits of the 20th century, the scientist Pierre Teilhard de Chardin, made it his life’s work to reconcile evolution and faith in a vision of the enchantment of the universe and the reconciliation of all consciousness in the Noosphere.

So, Francis will bring to the Papacy a rich heritage of openness, of willingness to walk alongside, of reflection and action in the world.

Joined to these Jesuit traditions will be the inspiration many are taking from the Pope’s embrace of St Francis of Assisi — a champion of the poor, a lover of all creatures, a man formed and marked by deep humility and sincerity. The choice of a papal name is always programmatic. As is the first appearance of the new successor of St Peter. And in this case, Francis, who eschewed the trappings of wealth and power in Buenos Aires, catching buses, cooking for himself, dressing as a simple priest, embodied that spirit.

Francis was the runner-up to Cardinal Joseph Ratzinger in the 2005 conclave, seen by observers such as the authoritative journalist John Allen of the National Catholic Reporter, as the candidate of moderates and progressives.

This is not to say Francis will depart from his predecessors on issues such as the termination of pregnancy and gay marriage. Such is the hegemony of these views that any heterodoxy on “social questions” would preclude elevation to the Cardinalate.

But it is to say that Francis will sweep the Vatican temple of the abuses, dysfunction and power craziness that afflict the Roman Institutions. His rejection of the sacralisation of the clergy, his openness to all — these are good signs.

As a Latin American, Francis has taken a strong stand on economic justice. Latin American conferences of bishops have often been characterised by rifts over the stance of the Church towards authoritarian regimes and over liberation theology. Bergoglio is not as radical as his Jesuit confrere Jon Sobrino, but he has left no room for any doubt of his opposition to oppressive economic and political structures nurtured by capitalism. So much so that, as John Allen has reported, fellow clerics sought to smear him through a whispering campaign in 2005, alleging complicity in horrors of the Argentinian dictatorship. Sadly, some right-wing Catholics will stoop to anything.

As a Catholic, in welcoming Pope Francis, I pray that he will end the evil of s-xual abuse and cleanse and purify the church, that he will be a listener and sufferer with his people, and that he will embody the Christ like traits of his namesake, St Francis.

*This article was originally published at Larvatus Prodeo

Surely the new pope is Francis ! after St Francis Xavier, one of St Ignatius’s first group of followers?
Francis Xavier (Spanish/Basque?) was a humble yet highly educated man who lectured in philosophy before becoming forming a religious group with Ignatius of Loyola and becoming a missionary far to the East.

Nil Desperandum on the “good pope” front.
Just asking, as a doomed heretic, would it be blasphemous to have a Pope named Jesus?
A rhetorical question. But, why isn’t Jesus the leader of this church?
I suppose Jesuit is a move in the right direction.
And little humility rubbing off on the billion little lambs wouldn’t go astray, considering that this organisation is, in truth, not the mother of Christianity.
When that hubris is discarded, progress might be made.
Example, Latin Americans claiming to have been waiting “two thousand years” to have an american pope.
Really, does “faith” excuse everything?