Don't sneer at Alan Jones -- without his long-running campaign against coal seam gas, would the issue have come to the attention of the federal government? Plus other political issues of the day.

Don’t frack my mother. It’s fashionable in publications like this to sneer at the suggestion broadcaster Alan Jones actually has political clout. Labor politicians even believe it is safe to boycott his 2GB breakfast program. But deep down, methinks, he does get through and influences all of them, political praise givers and critics alike.

For example, I doubt that without the long-running Jones campaign pointing to the potential dangers of fracking, federal Environment Minister Tony Burke would be bringing in legislation to ensure that any coal seam gas or large coal mine development that has “a significant impact on a water resource” must be assessed by the Commonwealth.

And I look forward tomorrow morning to hearing Jones (yes, I am a regular listener — who wants to just listen to the converted preaching?) continue his campaign by playing this contribution to the fracking debate where Sean Lennon, Yoko Ono, and a flotilla of celebrities sing a song titled Don’t Frack My Mother, which opposes fracking in New York state. 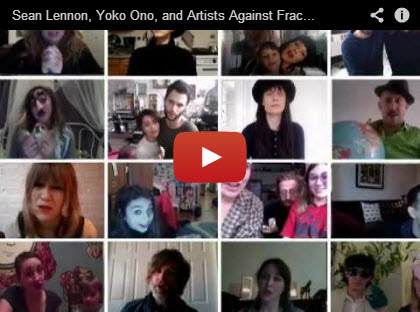 Bubbles go out of the  economy. The economic “experts” are predicting Britain is now in a triple-dip recession. New figures on the UK’s manufacturing industry released overnight dealt a blow to recovery hopes, reports the Telegraph, and sent sterling crashing to a fresh two-and-a-half year low. As if out of sympathy with the bad news, the Office for National Statistics dropped champagne from the basket of goods used to calculate inflation.

Keeping it in the family. Congratulations to my colleague Bernard Keane for his effort of yesterday “Labor leadership — it’s not just about September 14“. Definitely a worthy Leadership Beat-Up of the Day award winner for warning us Labor’s leadership troubles aren’t just about the coming election but the subsequent election – and Kevin Rudd might have his eye much farther down the track.

Perhaps I can get a victory for myself tomorrow with the following effort.

Wild fluctuations over the last few days in the Crikey Leadership Indicator. The punters don’t know which way to turn. Julia Gillard was rated a 50% chance of leading Labor towards the end of last week. That changed to 38% by Monday as the eagerly awaited publication of the latest Newspoll approached, and now we are back almost to 50:50.

Fairly difficult to read. There once was a time when I prided myself on my readable writing. A personal reference in every sentence. No prefixes. No suffixes. No more than 24 words at a time. Keep the intro to 18 words or fewer. Forget about semi-colons. Avoid commas when possible.

That was the Truth’s way. Let a Tasmanian with a reading age of eight understand.

I’ve deviated a bit in the 50 years since then. Got a bit fancy and long winded while still striving to be easily understood. Which is why this comment on my chunky bits of yesterday cut me to the quick:

Had to be read twice to be understood! Ah, the shame of it. Harder to understand than the WA Greens policy on Ecological Sustainability I called “mumbo jumbo”!

The head went down in shame as I hurried off to my Text Readability Consensus Calculator to put the Ben Green verdict to the test. In went the text of my stories to compare with the WA Greens words on ecological sustainability.

Here’s what I found: 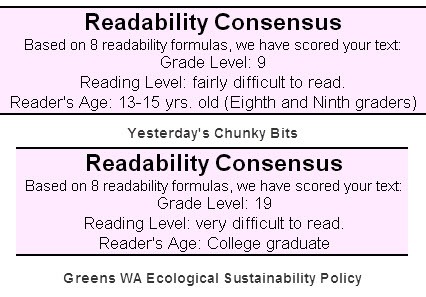 Singled out! Now some pedants who can’t find Column 8 any more will have at me for misusing the word “literally”, or something. I’ve got no problem with RF’s chunky bits, I like the format and I never skip it. Sorry for being glib and negative. My comment, which I stand by (comprehension’s subjective isn’t it) was more a bit of support for a rare political statement that doesn’t patronise (“trees” indeed – what next, “boats”?). I’m not sure if “readability” is just about vocab, or if it includes knowing what someone’s about, but I feel pretty clear on what those WA Greens meant and what they’re for and against. Yes, I’ve seen their argument put more simply in posters on primary classroom walls (“man” in the middle of a complex web – not just “trees”, mind) but this isn’t a speech or ad, it is a core policy statement. I imagine “stop the boats” rates well on the readability scale, but what does it mean as a statement of policy?

Isn’t Jones just another dealer – to politicians with a positive PR habit.

Allen Jones isn’t convincing the pollie’s at all,have you seen what has been going on up here on the Northern River’s. Our council and town folk have been hounding the National’s endlessly, plus our sitting Labor member’s for Richmond and the Tweed have been helping as well, so not every-one listen;s to Allan, I would put that shirt- lifter in a chaffe bag my-self if it was possible.

RF seems to be miffed that BenG had no difficulty with the Greens’ policy statement whereas he admitted that chunky’s verbiage requires rereads. Once is usually boring enough for me.