After a "messy delay" a "dog's breakfast" that "fails the public interest test". And that's just one newspaper. Crikey wraps coverage of the federal government's media regulation reforms. 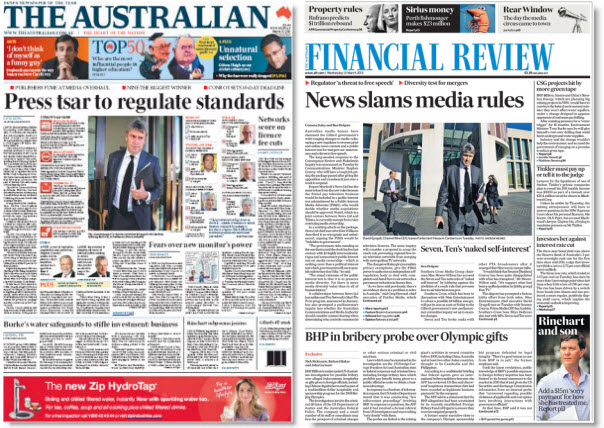 Mark Day: “A long wait for a dog’s breakfast”

“After a year of cogitation, negotiation and indecision, Stephen Conroy’s media reform plan is a dog’s breakfast, raising more questions than it answers.”

“Labor made a damaging political mistake by dithering on media reform for most of the past year when it always knew its ideas were anathema to most of the industry.”

“All politicians are self-interested. But few are as shameless as Communications Minister Stephen Conroy. His proposed ‘media reforms’ may be a thinly veiled response to a technologically driven changing media landscape, but we all know their real purpose: to punish and rein in the federal government’s critics in the media.”

“So denuded is Julia Gillard’s standing, and so chaotic is executive process, that the Communications Minister was able to ambush cabinet, catching wiser heads unaware. To his credit, the minister has at least given the Prime Minister a chance to secure her place in history. If the plan is passed, her’s will be the first peacetime government to restrict press freedom since censorship was abolished in NSW in 1823. Her reputation could be sealed by the impetuous judgment of one of her worst ministers.”

“Whatever happens to the plan the Minister outlined on Tuesday, the changes that he has been able to get through — like the re-stacking of spectrum to concentrate broadcasters at one end and free the rest up for telephony, the complete switch to digital broadcasting, and the NBN — will have a bigger impact on the changing media environment than many of the reforms he has announced on either standards or media ownership or content supply.”

Ben Holgate: “Conroy has failed to do his homework on media reforms”

“The senator is right to point out that freedom of expression lies at the heart of a healthy democracy. But it’s his idea for a public interest media advocate that runs counter to democratic principles.”

“The federal government’s so-called media reforms if they become law are likely to be a case of the bark being worse than the bite. That’s not to say they are smart, except perhaps politically, nor rational. They deliver the government the right headlines and sound bites to its political constituencies seven months from the election.”

“The reforms he had hoped to announce would have struck at Australia’s most powerful media organisation, whose critical coverage of Labor Conroy has denounced with routine scorn. But some Labor party insiders are nervous about a full-blown war with Murdoch in an election year.”

“Senator Stephen Conroy has huffed and puffed over media regulation for more than a year, without providing compelling evidence of any problem that needed solving other than Labor’s political interests. The so-called reforms that he released in a 1½-page statement on Tuesday and wants to crash through federal Parliament in the next two weeks are a mish-mash of disturbing threats to media freedoms and a needless increase in regulatory commercial uncertainty.” 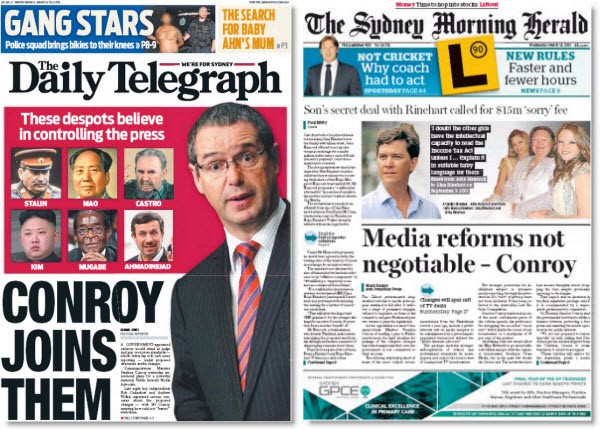 Kim Williams: “An aggressive attempt to silence your media”

“This government will go down in history as the first Australian government outside of wartime to attack freedom of speech by seeking to introduce a regime which effectively institutes government sanctioned journalism.”

“Is there anything this government will not tamper with? In its mistaken belief that more legislation equals good government we are witnessing one of the most frenetic and interventionist administrations our country has ever endured.”

David Flint: “Attack on the very basis of Australian Federation”

“The Gillard government is still trying to restrict freedom of speech and freedom of the press. We must not let them — these are among our most significant rights.”

“Freedom of the press is a phrase we’ve heard a lot from Stephen Conroy recently. And yet it is now clear that he has no idea what those words mean. The sweeping restrictions announced by the Communications Minister are the last refuge of a government which, unable to inspire positive news coverage through positive action, has now resorted to trying to enforce it.”

“But the plan to install a new Public Interest Media Advocate office that will decide if mergers of ‘national significance’ are in the public interest and also oversee the media industry’s existing complaint review procedures is untested. The Convergence Review concluded that the advocate would supplement rather than duplicate work done by the existing merger reviewer, the Australian Competition and Consumer Commission, but how that would work is unclear.” 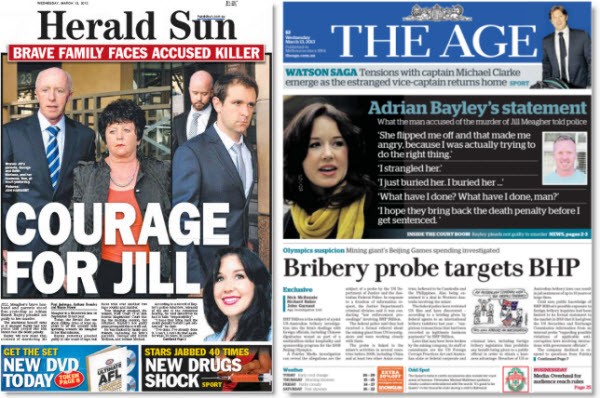 Andrew Bolt (blog): “Get their hands off our throats”

“The one thing that can be said with absolute certainty about Stephen Conroy’s media changes — if they ever see the light of a legislative day — is that they will not spark a frenzy of corporate activity. The reason is simple. The proposals have very little to do with today’s media reality.”

Editorial: “A muzzle on free speech”

“Senator Stephen Conroy holds the very Parliament to blackmail when he says he will not “barter” over his deplorable assault on freedom of speech. No other description fits the so-called media reforms he so rashly seeks to impose.”

“It’s a bald statement recognising two realities: there is only so much parliamentary time in this election year, and there is next to no political capital left to invest in a big contentious reform against the might of special interests armed with television channels, printing presses and official Twitter accounts.” 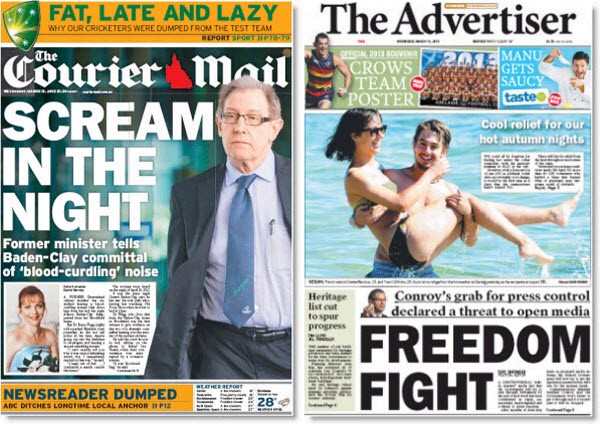 “When Senator Stephen Conroy began a press conference in Canberra yesterday to announce the Labor Government’s proposed media reforms, Australia joined a list of countries in which politicians, outside of times of war, have sought to control the stories that its citizens can read.”

Editorial: “Spite is behind Gillard Government’s move against free speech”

“Make no mistake. These media ‘reforms’, to use the term both loosely and wrongly, have nothing to do with ensuring higher standards of media conduct and greater diversity of views. They are about one thing and one thing only — spite.”

A family in distress on the TV news, and a missing law

How the government can protect privacy in the digital panopticon

Essential: are disgruntled Labor voters shifting to the Greens?

Conroy must be spot on if you are all squealing like the proverbials.
What the “press” fail to realise, (and this is proven by the continual decline in sales, relevance and quality etc.), is that they have no idea what is in the “public” interest. Further, the “public” have run away in droves from whatever the “press” has replaced accurate quality journalism with. In their star chambers, the “editors” think the public are the problem.
When an international “news” organisation is ordered to provide a manufactured negative daily report on any individual, it is sad and reflects more on the “news” organisation, its owner and employees, that on the individual being crucified. When the same organisation pays pro$titute$ to say whatever they tell them to say, the difference between their “journalists” and the pros diminishes, along with their credibility.
“Ignore us at your own peril” they seem to be echoing, & just like the grotesque squawking bitter old white goblin that provided that “threat”,less and less people care.

The classic ‘outraged’ rhetorical movement is seen in the Advertiser’s editorial: attribute your own motivation to your opponent.

I love the list of dictatorships that “censor” their press. The free press is doing a great job censoring itself outside of the public interest.

If the vested interests are venting such fury, it must be good legislation.