Stalinist plot or toothless non-event? Neither, write Bernard Keane and Margaret Simons (and First Dog) on media reform . Plus Fairfax journos revolt against Gina Rinehart. The government's National Cultural Policy a big win for arts. What teachers think of lifting the entry bar. And the rise of Mark Creasy.

Every other publication has had its say on Stephen Conroy’s “so-called” media reforms, so here’s ours: everybody calm the hell down.

The package of regulatory reforms and other proposals announced by the government is neither very good nor very bad. It goes too far and not far enough. It is, like most government reform, a deeply flawed compromise.

As Margaret Simons writes today, much of the thrust of reform — a digital agnosticism — has stalled:

“The saddest thing about the package Conroy announced is the opportunity to make news media regulation or self-regulation uniform across platforms has been lost, for the moment at least. Both Finkelstein and the Convergence Review, and almost every industry body consulted, recommended the approach be platform neutral. This would have represented a liberalisation of regulation for broadcast media.”

So regulations remain split between broadcast and text-based news (with a whole lot of grey in between), membership of self-regulatory bodies remains voluntary and the carrots set out to join — exemption from the Privacy Act — aren’t particularly compelling. The only layer of new regulation — a “Public Interest Media Advocate” to watch over self-regulatory bodies like the Australian Press Council and judge mergers and acquisitions for the public good — is a government-appointed, one-person office that can’t protect smaller newsrooms. Media companies are right to be cynical about that.

This isn’t an attack on freedom of speech, no matter how hysterical the coverage by some media might suggest … 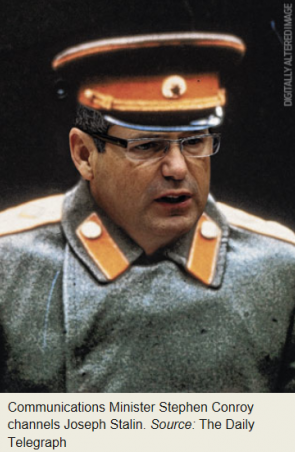 And so this is where we’re at: after more than a year of careful consideration, caught between bullying media barons and their bogus claims of censorship, and a harried minister demanding a take-it-or-leave-it, now-or-never approach.

They don’t trust us. If this is how we handle reform, nor should they.

“Freedom of speech”?
Who controls/edits more of that (misinformation) than the conservative media, from their share of the market; controlling what constitutes “public interest” – as long as it’s in their proprietor’s? Their argument revolts around how they reckon they protect us from government excess – but who protects us from that same media’s unelected, vested, self-centred, vindictive superciliousness?

@klewso who protects us indeed we need some protection from possible exesses, from the likes of Lupert M and a corpulent w.a. baroness G.R? The British know what exesses can bring to their freedom of speech.