The Sun on Sunday's circulation is tumbling -- a bad sign for Rupert Murdoch's new publishing arm. And other media tidbits.

Bad News as empire split looms. Has Rupert Murdoch lost his legendary golden touch? The question needs to be asked as a result of the slow collapse of sales of The Sun on Sunday, the new UK Sunday newspaper Murdoch introduced to replace the closed and discredited News of The World.

The Sun on Sunday’s first edition appeared on February 26, 2012 and had sales of 3.22 million in its opening weeks. “Amazing! The Sun confirmed sale of 3.260,000 copies yesterday,” Murdoch tweeted at his official @rupertmurdoch account. “Thanks all readers and advertisers. Sorry if sold out – more next time”.

According to the latest circulation figures for February this year, released last Friday in London, the paper’s sales had fallen to 1.912 million, or 40% lower than the first month. The Sun on Sunday’s sales are also 700,000 below the 2.6 million the defunct News of the World sold in June 2011, just before it was closed by Murdoch because of the phone hacking scandal.

The weakness for The Sun on Sunday is bad news for News ahead of the split in the Murdoch empire in the next few months into the “bad” publishing arm (to be called News Corp) and “good” company, Fox Group, which will contain the US broadcast and content companies, and stakes in similar businesses in the UK, Europe and Asia, but not Australia. The Sun is the profit-driver for the UK papers of the new News Corp, so the slide in its sales is starting to become important. Circulation revenues are under pressure as a result of the slide.

Meanwhile, the new News Corp has a curious view on what constitutes one of its key newspapers. In the second information document filed with US regulators late last Friday, the company revealed that it doesn’t think The Australian newspaper is among the key brands in its news and information group. — Glenn Dyer (read the full story here).

End of Parade for Nine, Fairfax. Fairfax Media and the Nine Network are batting zero and not very happy with each other over the PR debacle for the failed UK drama Parade’s End. In yesterday’s Sydney Morning Herald, an apology appeared saying “due to a late change from Channel Nine” Parade’s End was moved to GEM this Wednesday night at 9.30pm instead of on Nine’s main channel at 8.30pm. “The change was made after The Guide went to print,” the SMH explained.

And why was this a debacle? Because Fairfax had given Parade’s End the cover of its weekly TV guide and promoted the fact the program was on Nine’s main channel from 8.30pm. At Nine it underlined the programming confusion at the network that it took two days to confirm what everyone in TV knew, that after its first episode flopped the program would be shunted. Knowing the SMH was giving it a bit of a mixmaster, Nine didn’t bother making the switch until The Guide had gone to press. No wonder the SMH ran the correction in yesterday’s paper to save face with readers of The Guide.

There is a further point here about The Guide. Why write a cover story for a series after it had started (and without at least knowing what the ratings were)? Surely this story should have appeared a week ago Monday in the first tabloid edition of the paper? The real message from the correction was aimed at Nine and basically said “we gave you free publicity and you let us down”. — Glenn Dyer

Front page of the day. The New York Post reports that the attorney defending an accused terrorist in an upcoming federal trial in Brooklyn will ask a judge to ban Jews from serving on the jury. 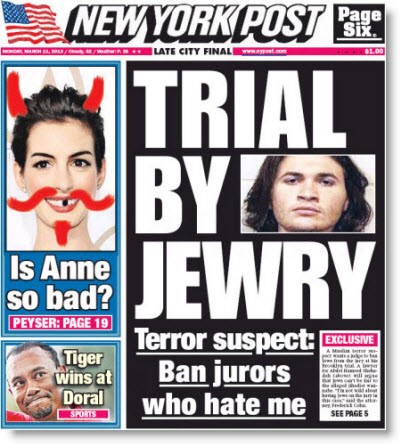 “Parade’s End” actually started two weeks ago, so The Guide was promoting a show that was half way through its run (there are only four episodes altogether). Pretty stupid all round.