Labor's leadership troubles aren't just about the coming election but the subsequent election -- and Kevin Rudd might have his eye much farther down the track. 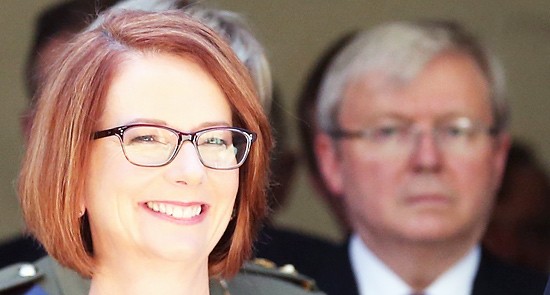 Here comes a Labor leadership article. Those of you who revile such things: look away now.

This is not to add to the acres and acres of analysis given over to Labor’s options, which are, in the end, pretty simple: current Prime Minister Julia Gillard, former prime minister Kevin Rudd or none of the above. It’s similar to the leadership question the Liberals faced in the late ’80s while John Howard and Andrew Peacock were engaged in a toxic feud, albeit in opposition. The Liberals tried one, then the other, then went back to the first, then opted for none of the above, repeated the dose, then settled for the other. It turned out OK for them. There are limits to the analogy, however: Rudd is unlikely to go off to America and knock around with Shirley MacLaine.

It’s more to raise this point: barring a huge victory to the Coalition in September of the kind that hands a Senate majority to Opposition Leader Tony Abbott, there are not one but two elections Labor needs to consider: the one in September, and the one that Abbott has in effect offered a blood oath to hold in order to obtain a repeal of the carbon price.

Abbott has repeatedly made a point of distinguishing himself from Labor in regard to election commitments: he will keep them to a minimum, he says, because he knows that he cannot risk not fulfilling them. The man who would have ridden his campaign against Gillard’s untrustworthiness all the way to the Lodge will not be able to risk ditching a key promise like repealing the carbon price. Without a Senate majority, he must rely on Labor caving in and supporting repeal, or go to an election sometime in 2014 or early 2015.

Abbott will enter his prime ministership from the unique position of being disliked by much of the electorate. He may well be vulnerable if forced to an election by his own promise of a repeal of the carbon price — particularly if he’s up against an proven, electorally popular politician like Kevin Rudd, who was even more effective as opposition leader in 2007 than Abbott has been since 2009.

It’s by no means a certain scenario: the Liberals could dump Abbott for former leader Malcolm Turnbull or shadow treasurer Joe Hockey and thereby escape a difficult double dissolution election. Abbott might prove a popular prime minister. His current deep unpopularity with the electorate could vanish once he takes the mantle of national leader. This is a man, after all, who has surprised many of us with his remarkable performance as Opposition Leader, and he has demonstrated a Howard-esque pragmatism in realising he has to leave many of his own obsessions behind if he is to be an effective leader.

“… Rudd’s reported reluctance to take the leadership before the election even if Gillard were to step aside starts to make more sense.”

Or after a big defeat, Labor MPs might cave in and support repeal, glad to be rid of the scheme foisted on them by the Greens in minority government. Abbott could dump his blood oath promise, although that’s highly unlikely, or more plausibly declare his promise fulfilled if he introduces repeal but can’t get it through the Senate, saying voters could help him fix the problem at the 2016 election.

Most likely of all, the Liberals might win control of the Senate, particularly if they snare four spots in WA at the expense of Scott Ludlam. Their current performance in Victoria and Queensland suggests it’s a tough ask, but if anti-abortion Katter Party Senator John Madigan holds the balance of power, repeal might be a chance of passage, assuming an Abbott government is happy to trade off women’s rights and lives here or overseas.

But looking at the following election rather than this one, Rudd’s reported reluctance to take the leadership before the election even if Gillard were to step aside starts to make more sense. A big defeat would remove Gillard and current Treasurer Wayne Swan from the leadership, and allow Rudd more of a fresh start than he’d get currently.

That immensely complicates the leadership issue, as it means Rudd might be hanging around when the party might have thought it would be time to move to the next generation of leaders, like Defence Minister Stephen Smith (who’s unknown and comes from Perth) or Employment Minister Bill Shorten (who needs more time in Parliament and in the public eye before he’s ready for the top job).

But everyone eyeing the leadership has this in common — they need Labor to perform well enough in September to be a threat at the following election, and in particular they need the Coalition to miss out on control of the Senate, giving Labor the option of forcing a double dissolution election on the carbon scheme. That could mean trying to ensure the Greens hang on in WA and pick up a Senate spot in Victoria and NSW.

Or Gillard can lead Labor to an unlikely but not impossible victory, which would confound everyone, not just aspirants for her leadership.

Dude, wait what? When did Madigan abandon the DLP for the Mad Katters?

I should of taken the advice of the first sentence, what a waste of time. Anyone would think that this article is from the Australian where the Newspoll prevented them from running the story they wanted so the switched it to the “ALP would win under Rudd” despite the fact that poll they are using to make that case is almost certainly skewed by mischief making Liberal voters.

Bernard,
Abbott has not suprised me in how he has conducted himself as opposition leader. He is as bad as I expected.

What has surprised and disappointed me is the inability of the govt to gets its message accross which has been exacerbated by the pro Abbott media bias and his ability to escape rational media scrutiny. It is almost asif when Abbot ( or his dog whistlers) makes one of their terrible gaffs or statements that they are excuse because what else would we expect.

Abetz recent associatopn of asylum seekers with paedophiles is just the latest and yet where was the media outcry? I was waiting for some one with the guts to point out that children were more likely to be molested by RC priest than an asylum seeker

On the rare occaision he has been pressed he has panicked and completely demonstrated his unfitness for office (Sh*t Happens, Jet Lag, BHP/Sales inerview are cases in point)

This inability to handle pressure is allowed to go unchecked

It amazes me that a govt wrunning a strong economy, with low unemployment, low rates & growing productivity is somehow to be painted as incompetent and in crisis.

Labor Leadershit. It’s just not interesting anymore.
But Abbott PM, now there’s virgin journalistic territory.
Who said the age of discovery is over!
Give it a good Captain Cook, Bernie!
The great southern alternative PM is Terra Incognito for the Palace Eunuchs, or not?
Apparently, this unknown event is going to be discovered after September.
It is all going to be a great surprise, this Abbott Leadership.
But it is there somewhere just waiting to be discovered, just like The Great Southern Land, it just has to exist, you know, as a “balance” to the Labor Leadershit Saga.
The MSM have been sailing in circles for the last three years trying to find something better than Abbott PM.
If the voters knew what Abbottland is really like would they want to live there?
You have a job to do Bernard, tell the ugly truth about Abbottland.
It may end up as a penal colony that no-one wants to live in, and voters arn’t criminals, voters deserve to know what their choices are.
So leave the Labor Leadershit alone, (it has been ingested and shat out and reingested endlessly and lost all its nutrients), and get on with your job.
Tell us about Abbottland Bernard!

Bernard, there’s that word “toxic” again, all be it used in reference to the libs this time (rare). It really is beneath your writing skills to use it. I’m throwing up a challenge, try another word. How about the liberal brand is pestilential!