Despite the low success rate, governments continue to offer small sums of money to first-time buyers and wonder why it never works. Property guru Terry Ryder of Property Observer explains. 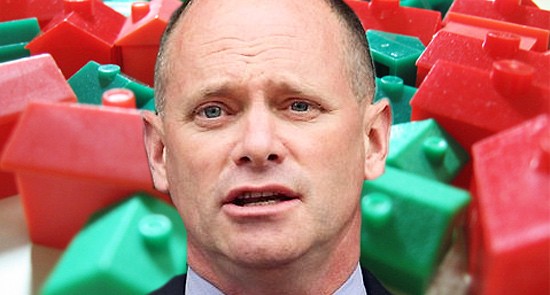 The Queensland government has given the world a new definition of insanity.

Since the grant scheme — which gives $15,000 to first-timers who build new homes — was launched in September, just 126 have taken advantage of it. The government’s solution is to keep the scheme unchanged but to rebrand it.

I’m an optimist by nature but I despair of politicians ever understanding real estate or implementing measures that genuinely help the industry.

The Queensland flop continues a long history of failure by government grant schemes for housing. Despite the low success rate, governments continue to offer small sums of money to first-time buyers and wonder why it never works.

The building industry fuels the failure by lobbying government to give handouts to people who buy or build new homes. They must know this approach essentially doesn’t work, but the Master Builders Association has recently lobbied the federal government to boost grants to first-home buyers.

Perhaps the building industry was fooled by the upturn in first-home buying activity in 2009, at a time when federal grants were particularly generous. But it wasn’t the grants that inspired first-time buyers — it was vastly improved affordability through lower prices and sharply lower interest rates, in the wake of the GFC impact.

Grants simply don’t work. They do little to bridge the gap between the cost of a new home and the cost of established housing of similar standard. The new product, on average, costs $70,000 more and a grant of $7,000 or $15,000 doesn’t cut it when young hopefuls do their sums.

The core problem is the component of government taxes and charges in the cost of new dwellings. The research indicates that government imposts such as stamp duty can be as much as 40% of the cost. That means a $400,000 house-and-land package would cost just $240,000 if those imposts were removed.

In offering a relative pittance to buyers, politicians are giving with one hand and taking 10 times as much with the other. And they wonder why their schemes don’t work.

Even a scheme happening in the Port Macquarie region of New South Wales — where first-home buyers can get over $40,000 in benefits through a mixture of council rebates, state government grants and stamp duty concessions — doesn’t come close to bridging the whole gap between new housing costs and established house prices.

You have to wonder: do politicians really fail to understand why their policies don’t work? Or do they indulge in cynical exercises to give the appearance of doing something for young buyers, while continuing to milk real estate as their favourite cash cow?

*This article was originally published at Property Observer

Don’t forget that abolishing stamp duty was a “solemn promise” from Costello when Howard lied about never ever introducing the GST.

Oh LOL. You’re looking at half-a-million for a decent property in Brissie, and maybe $300K if you’re willing to settle for something in the sticks. $15K is nothing. It won’t change anyone’s behaviour, but it will burn government cash.

Newman has been a really disappointing premiere. He didn’t win the election. Anna Blight lost it. He’s done crazy things like cutting funding to the the Queensland Health Tuberculosis ward while paying to build a greyhound racing track at Logan. And while he was busy firing public servants claiming there was no money, he was buying ridiculously expensive chairs for the executive buildings – Anna Bligh’s weren’t good enough. He also went mad building tunnels around Brisbane. The first two went bankrupt and when no company would touch the third one he borrowed billions. Lots of stupid things like that, and now this.

And to top if off he’s hired Privatisation lobbyist Peter Costello – maybe you have heard from him – to review the states finances where he recommended – surprise surprise – privatisation.

The first home owners grant enables builders to put up prices by the amount of the grant, increases the tax take for the state, commonwealth and the council and creates more advertising for newspapers.

Everyone wins.
(Everyone important wins)

green-orange
Spot on . short , accurate and not wordy .

Real estate has long been the cash cow of state and local governments.
Professor Edward Shann, in his “Economic History of Australia”, (tragically missing from the nation’s bookshelves), outlines how early colonial governments rationed “Crown Land” for residential uses, trickle feeding the supply in order to maximise the money so raised for government expenditures.
The cash cow has become the “Golden Calf” and those trying to provide affordable housing have much to complain about.
Nothing less than a Royal Commission into Affordable Housing will change the present unsustainable disaster.
Get this in now, before the next election, because a conservative regime in Canberra will only perpetuate the status quo and bring the whole edifice crashing down through their normal, “Laissez Faire”,reliance on a mythical Free market competition and the consequent neglect of good governance.
Contrast this long-term Australian experience with the example of The US at the time of Ford’s Model T.
People escaped the confines of the cities and farmers competed to peg out their land for these new settlers.
Land prices (absent services like water and power) settled under this free competition to the lowest acceptable to the farmers.
A vast industrial expansion took place as homes were built and furnished without a “scarcity” land price tax as had applied previously in the crowded city centres.
The American Dream made real.
In Australia the government controlled, land rort continues to this day.
It is, as the above article outlines, destroying the Housing industry and starving other industries out of existence.
Yes, a Royal Commission is appropriate.