Hawke relives the past. Bob Hawke proved he still has the old magic as he spoke to a press gallery reunion in Canberra on Saturday night. The shindig was held to mark 30 years since he was elected, and plenty of old faces from the press gallery came from all over the country to catch up. Accompanied by wife Blanche d’Alpuget (in a stylish pink coat), Hawke hadn’t even started speaking when the heckling started — is it true that ex-Fairfax legend Alan Ramsey was the first to interject? And what did he say? We certainly can’t believe the heckle came from partner Laura Tingle from The AFR, who was sitting next to Ramsey … Tingle doesn’t seem the heckling type. 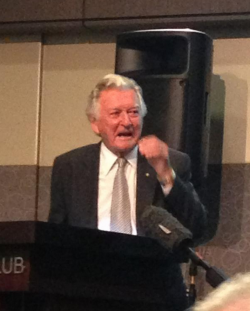 Hawke speaking to his old foes at the press gallery dinner

Hawke told the throng at the National Press Club he’d just come out of hospital, but our spies say he seemed in fine form and “looked fantastic”. One attendee said many talked about “how much he hasn’t changed”. Apparently Hawke kept it light during his 25-minute speech, talking about what Australia was like when he was election in 1983, why he did some of the things he did, the relationship between politicians and “you guys”, etc. A 10-minute video of the speech Hawke gave to the press club before he was elected was played to much laughter at baby-faced reporters like Michelle Grattan and Heather Ewert.

At the reunion, Hawke sat next to frontbencher Craig Emerson, who used to be one of Hawke’s economic advisers. Apparently Emerson used to take his guitar on the PM’s media plane and play some tunes, along with folk-loving journo Peter Logue.

We hear that “a lot of wine was drunk and there was  fair bit of dancing” after Hawke and d’Alpuget left the do. Journalist Christine Wallace and her partner, Michael Costello, were carving up the dance floor, while Fairfax supremo Greg Hywood and partner Kate Legge from The Australian were spotted enjoying themselves.

Apparently a major topic of conversation around some tables was the legendary party thrown when Old Parliament House was shut down and everyone moved to the new building, back in 1988. We could tell you a thing or two about that party, but let’s keep it G-rated. For now.

If you’ve got any gossip from the reunion or anecdotes from the press gallery from the time Hawke won government (including THAT party), pass it on. We’d love to hear what some of our present-day gallery (and political) heavyweights got up to back in the 1980s, when the press gallery seemed a more rowdy place than it is now.

Napthine is better than ready. Seems new Victorian Premier Denis Napthine, who came out of nowhere to take the top job late last week, is onto a good thing. Napthine, who is also the Racing Minister, went along to Super Saturday at Flemington on the weekend, where he backed a quinella in the Newmarket — Moment of Change and Better than Ready. Apparently his horses did quite well — first and sixth — but he didn’t win. Sources say he appeared in a cheerful mood. Tips is no racing expert, but we think a quinella is when you pick the first two finishers in a race.

And is is true that Napthine, who is a vet, has a pet whippet that is rather overweight, hence is known as a whuppet? Crikey’s resident whippet expert First Dog on the Moon reckons it is very difficult to fatten up this breed. Clearly Napthine has questions to answer.

Blast from the past. We heard from a shocked tipster that if you want to make progress payments for ANZ construction loans, it has to be done via fax. “No exception.”

“Having found myself stranded here in the 21st century without easy access to the 1970s, I enquired with the bank whether there might be a simpler, more convenient and modern means of sending paperwork — like, for example, email? The answer was a flat-out no. Under no circumstances. For a bank that happily texts messages to advise when payments are being made, had a Twitter presence and offers a mobile banking app for maximum convenience, the mortgages team seem to still ‘live in bank world’.”

When Tips is occasionally asked to fax something (banks do seem to like faxes), Tips is flummoxed and has to head to the nearest museum to find a fax machine.

Mind you, we think telegram could make a resurgence. Apparently Australia Post and Western Union don’t do them any more, but there are some start-ups around that offer the service. Bring back the old ways stop. If you’ve successfully sent or received a telegram in the past few years let us know stop. Received.

Haven’t you go an All-In-One Printer/Scanner/Copier/Fax?

As long as you don’t actually replace the ink supply from the. manufacturer of the printers it will cost you almost nothing. And surely the ANZ would accept an email with an attached file which is a doc with your signature on it: exactly equivalent to a signed fax. But you would have to have a printer/copier/scanner. I assume you are seeking to pay an amount which can’t be done by direct online banking transfer because it exceeds some limit like $10,000 or $50,000 on a single day.