The Labor brand seems to be in decline across the country, and other political stories of the day.

The declining Labor brand. With WA out of the way I note that in none of the last nine federal, state and territory elections has Labor’s primary vote managed to reach the 40% mark. And in all of those elections, except for the ACT, the Labor primary vote declined.

That surely tells us something about the Labor brand. And that something points to problems far more fundamental than the popularity, or lack of it, of a federal party leader.

No change in the Crikey Indicator. Neither the Prime Minister’s week out west nor the WA election has influenced the assessment of the markets. The Crikey Election Indicator still has the Coalition as an unchanged 83.3% chance of winning the federal election. 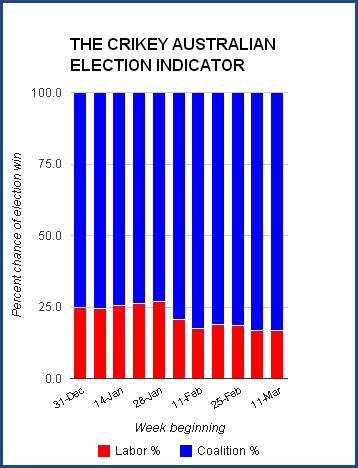 Well, thank you, Dennis. Congratulations to Oz columnist Dennis Shanahan for keeping the leadership issue alive. A mighty effort on Saturday to take so many words to reach the conclusion featured below. 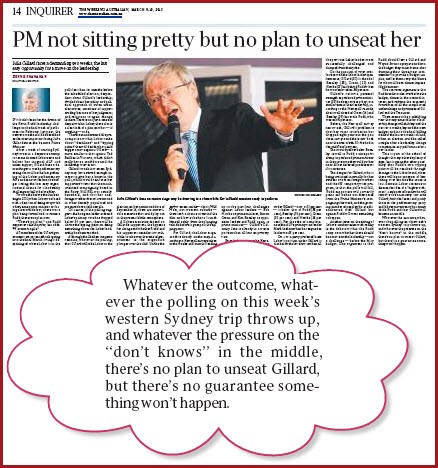 A worthy winner of our Labor Leadership Beat-Up Award. And another honourable mention to Samantha Maiden, who can be relied on to give us some leadership speculation every Sunday in the News Ltd Sunday tabloids. 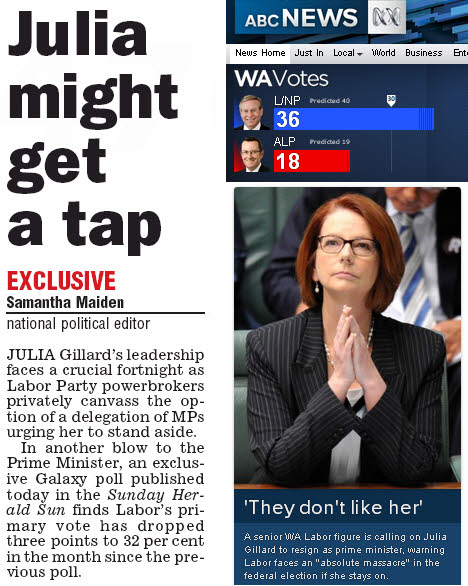 The ABC also re-entered the contest with its website this morning deciding that the most significant feature of the WA election was the comment of a “senior” (?) ALP figure that the PM should resign. The story “‘Gillard factor’ blamed for Labor’s election loss” was top of the site’s most popular list.

Wives, children, babies and now a sister. Our campaign picture portfolio kept growing over the weekend. 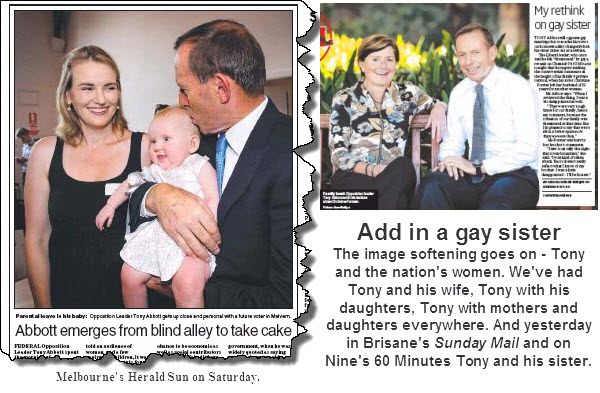 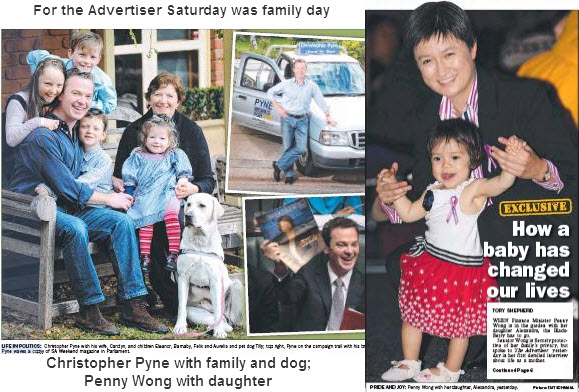 Votes of the day and gun stories. In the Coos Canyon Schoolhouse at 6.30pm Maine (US) time today, Monday, March 11, the residents of the small town of Byron will take part in a New England institution where townspeople vote “up or down” on municipal proposals. Before them will be a recommendation from all three members of the town’s Board of Selectmen suggesting gun ownership in Byron be made mandatory.

The article asks, “Shall the town of Byron vote to require all households to have firearms and ammunitions to protect the citizens?” Says Head Selectman Anne Simmons-Edmunds, also a police officer in nearby Dixfield: “We’re hoping that the town will get on board with us but will accept whatever the town wants.”

The Maine Sun-Journal reports Simmons-Edmunds said Byron’s proposed mandate was initially done as a tongue-in-cheek article, but she is quite serious about it now.

“She surmised that just about every household in this community, population 140, north of Rumford, probably has at least one firearm.

“The town had a resident who sought and received a federal permit to own a machine gun, just because he enjoyed shooting it, she said. But since he passed away, she didn’t know whether that weapon was passed down to his son. Another resident legally has a .50-caliber machine gun.

“We’re trying to prevent someone from coming into our town and trying to restrict our rights, “Simmons-Edmunds said. “It’s time to tell the government,’Enough’s enough. Quit micromanaging us.'”

Meanwhile, over in South Dakota they have already voted and passed a law allowing schools to arm teachers and other staff with guns. Republican state senator Craig Tieszen, a former police chief, said: “If we think we’re immune in South Dakota from school violence, we should probably think again. As trite as it sounds, the best way to stop a bad guy with a gun is a good guy with a gun.”

Hang the expense, we’re going local. Before referendums on Saturday on de-amalgamation of local government shires, the Queensland government made the rate-paying voters aware of the price they would pay for a yes vote. Ratepayers in Douglas and Mareeba, for example, were told the cost of breaking away from Cairns and the Tablelands was nearly $8.2 million, which would work out to $701 for each Douglas ratepayer in the first year and $872 for each Mareeba ratepayer in the first year. Yet by very clear majorities in all four of the de-amalgamation referendums the voters turned their back on financial efficiency and voted to return to running their own affairs. 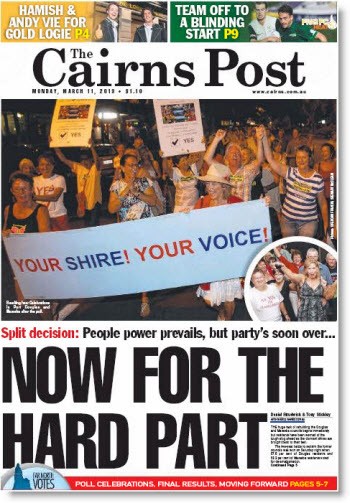 “I was particularly struck by the way Cameron is still claiming that Britain’s low interest rates show that his policy is successful and necessary. This is a bit like the high priest sacrificing a virgin once a month to ensure that the sun keeps rising, then claiming that the fact that the sun has risen proves that the sacrifice was indeed necessary.”

How do those Labor figures compare to “Liberal” at federal elections?

The “senior” WA Labor figure referenced is no doubt Alannah Mcteirnan. Former Transport Minister and Armadale MLA. She quit state parley for a tilt at the Federal seat of Canning in 2010 but fell short and is now in local Gov’t.
Mctiernan, a capable minister IMO, has been loudly badmouthing the Feds since Saturday. It’s no secret, so I don’t know why the use of that “senior” business, rather than naming her. Perhaps it gives the impression of relevance in the east, where her name would only be recognised by politics nerds.
Matt.