Does the Destroy the Joint movement actually miss the point? In a fiery blog post that had social media abuzz over the weekend, feminist provocateur Helen Razer says the small-target strategy isn't working. 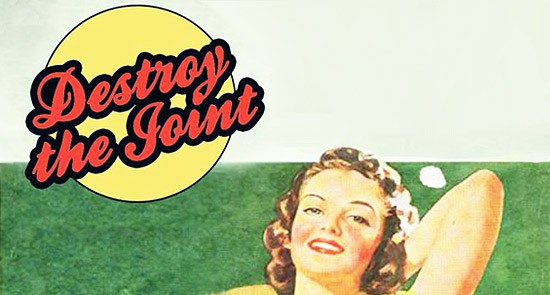 Anyone who knows me even a little makes sure to avoid the topic of gender in my company. My ideas about gender come more from Judith Butler than they do from, say, Growing Pains. An express route to my trousers is to talk about the seams that join Freud to Marx. My relationship with feminism is long, ardent and difficult.

Feminism. It keeps me awake at night. Yeah, I got problems. But not so many, I’d venture, as an Australian feminism that produces twaddle like this. For International Women’s Day, here is a piece that considers the special qualities women might bring as leaders of professional media.

That professed feminists can think that women have “special” qualities that they might bring to enterprise is fucking beyond me. Women are not nicer. Women are not a civilising influence. Women are just as capable of avarice and stupidity as anyone.

This “if only women ruled the world” shit has no place outside the Hallmark Corporation. Ascribing a Marian grace to my gender might work in the Catholic Church but it really shouldn’t have any function for those who do not worship the Blessed Virgin.

Women are not gifted, either socially or biologically, of anything special. If we believe that they are, then we must also accept the possibility that the gender could be marked with unpleasant characteristics. If we believe that women are “better negotiators” or “great multitaskers”, we can also easily believe they are “not very good with money”.

Anyhow. The writing. One of many pieces of crap I saw today. I know little of its author Jenna Price. However, I certainly do know how to Google and, as a Media Professional, could easily pretend I have been aware of the lady’s work as an activist and academic for some time. And, in a way, I have as she is one of the architects of the local “movement” known as “Destroy the Joint”.

No. Destroy the Joint is not a competitive league of doobie smokers, nor is it the work of those who especially like to eat spring lamb. It is, in fact, the locus for much feminist “action” and so a good site for inquiry.

Look. If you don’t know about it, read this hagiography. In short, the campaign sought to reignite feminism through a social media critique of traditional media.

“I know the Labor Party deludes itself that the electorate can be nudged to good by marginal lies and marketing. Don’t make the same mistake.”

We sit in front of screens and we suspend our thought to enhance our desire and then we mash our own genitals to the point they explode in a brief but ecstatic frenzy of nothing especially productive. It’s a sad little ragegasm we need to repeat seven times a day in the absence of genuine congress.

And don’t give me that “there are many feminisms” shit. Yes, of course there are and my experience of gender is markedly different to that of a lass (or lad) living, say, in Maputo. But, for the sake of fuck, at SOME point, we have to agree about our basic aims and get off this DTJ-endorsed fap-wreck before we all perish from the carnal stink.

There are two chief DTJ problems and the first is that it feels like a cultural studies tutorial from 1991. I know what it is like to be absorbed in the novelty of semiotics and that “Angrily Calling Out Sexism Wherever You See It” is habit-forming. The behaviour is compulsive and sometimes, you know, it makes you act before you think and you get it wrong. SO wrong. I recall, for example, a moment in which DTJ ally Anne Summers called a urinal shaped like a mouth “misogynist”.

That the mouth urinals purchased by a Sydney restaurant were very clearly referencing the famous John Pasche Rolling Stones male mouth logo was immaterial; the lavs are on display at a Rolling Stones museum in Germany. And, that these latrines had been present for years just a kilometre away in Oxford St in the bathroom of a club for homosexual men was not deemed relevant, either. Didn’t matter. Here, recourse to logic and facts would mean a pause in the fun, fast online work of screaming “MISOGYNY”.

In one social media conversation, a DTJ “pledge” told me I was a misogynist for “supporting” (NB: if one is not objecting along with DTJ then one is supporting rape, et al) this “crap”. As a great fan of Marcel Duchamp’s readymades, I couldn’t have been happier when she told me that a “urinal could never be art”. HA HA HA.

How am I the only person reminded here of the Piss Christ shame of the ’90s with Summers and DTJ cast as George Pell? The idea that art (yes, even low or middle-brow art; and that includes Sexist Comedians) needs absolution from the Feminist Cardinal is, to me at least, anathema.

(Was it a similar frustration with dummies that drove both Germaine Greer and Camille Paglia to publish on the topic of visual art?)

So. Yes. Bad cultural studies practice is the first problem. The second problem is that DTJ and her associates actually believe they are healing the faithless.

Look. Here’s the thing: telling people they are being disadvantaged is a tricky business, Caroline Chisholm. There’s something dangerously missionary in an approach that seeks to draft sisters to a Crusade chiefly at war with nonsense on the behalf of hollow gods. You are make-believe-slaying paps that snap pregnant celebrities. Oooooh.

Are these your true adversaries? Do you REALLY think The Patriarchy will cease to function if you boycott a bar or a performer or a clothing store? Are you jamming the gears of capitalism by defending Chrissie Swan?

Baby, what are you fighting for? I presume the rationale is that by talking about “Everyday Sexism”, Everyday Women will join the struggle.

No. Don’t think so. People aren’t that easily led or recruited. I know the Labor Party deludes itself that the electorate can be nudged to good by marginal lies and marketing. Don’t make the same mistake. Tell your constituency it is the struggle against masculinised violence and feminised poverty. They are bright and brave enough to hear it. It is arrogant and unhelpful and even alienating to suppose that they are not.

If you want to politicise someone, here’s a thought: talk to them about politics.

You don’t need some ridiculous spin about inappropriate plumbing or sexist wallpaper or whatever the fuck it is this week to apprentice folk to The Struggle. You need to read some macroeconomics, bitches, and spread the fucking word.

Hey. I’m right. I was, in fact, appointed feminism’s door bitch. And, no, you can’t come in if all you have to talk about is The Need For More Women CEOs and Less Sexism in Ads.

I am, however, flexible about double denims.

Why Sarah Hanson-Young can’t sue her way to equality

Razer: ‘toxic masculinity’ debate is self-defeating and toxic itself

You are welcome to my copies of Jagged Little Pill and Supposed Former Infatuation Junkie. Do you realise guys I was born in 1974?

The Duchamp ‘ready made’ comment was the clincher. Great piece.

It is so easy to be a contrarian rather than actually take part in any real action. And by real action I do mean things like writing to advertisers on 2GB and boycotting and naming sexist attitudes.

Razer says we should be fighting the fight against “masculinised violence and feminised poverty” well I would be happy to join her in the front lines if she could just let me know where. But that is the point isn’t it because reading ‘some macroeconomic texts bitches’ (I love the Felicia Day bitches hook especially)is not going to change the world.

So while I am waiting for the big fight to begin, and it may some day and I will be there, I spend my time like many other women, doing what I can when I can. Oh and because some of this takes place on social media then women who have access to my stuff, and to my daughter’s stuff and who were not politically active, are now becoming so.

What I find most intriguing about ardent feminists is the way they seem so bent on treating men the way they have taken exception to being treated by men.

‘Women are not gifted, either socially or biologically, of anything special.’

That’s mere opinion. According to a doco on SBS last week about the sinking of the ‘Titanic’, women survive longer in icy water.