Tony Abbott's fashion choices go under the microscope. And other media tidbits.

Breaking: Abbott likes blue ties. Brisbane’s Courier-Mail keeps its eye on the big issues today, with a two-page spread on … Tony Abbott’s choice of ties. According to Michael Madigan and Steve Lewis, Abbott’s preference for blue ties “has been noted by several commentators, who have been mostly positive”. Really? It gets better:

“Staff have said in the past that he does not have a personal stylist, nor has he dyed his hair or had cosmetic dental work. And he has told journalists he’s not a Botox type of guy, preferring vigorous early morning exercise to maintain his healthy glow. The only concessions to vanity in this election year have been hair gel and facial moisturiser — all designed to increase his appeal to women voters.”

The Opposition Leader, we’re told, opts for the blue-on-white look to avoid attention. “If you’ve got more or less the same uniform on every day, people just take it for granted, and your appearance doesn’t become something that people talk about,” Abbott said last week. Guess that didn’t work out as planned. — Matthew Knott

Keane: media’s phony cries for ‘consultation’. Watching the mainstream media try to wriggle out from greater regulation is always amusing, particularly when they cry “free speech”, something many media companies have a highly selective view on. But the latest line from the beleaguered mainstream media, reported today, is worthy of note: the federal government has failed to consult with the media on possible changes such as a right to privacy and a stronger code of ethics.

Let’s go through what’s happened on a right to privacy. First, in 2008, there was the truly vast Australian Law Reform Commission report on privacy, which among its thousands of pages included a recommendation on a statutory right to privacy. Media companies were encouraged to, and did, make detailed submissions on a right to privacy and how it would affect the media, reflected in the ALRC’s recommendation for hurdles for complainants and a public interest test. Then in July 2011, federal MP Brendan O’Connor released a discussion paper on a statutory right to privacy, giving the media another opportunity to comment in detail. At the same time, there was the Convergence Review going on, which also looked at privacy issues in the media, albeit not as a central part of its brief. Media companies could provide input to that as well. Then there was the Finkelstein Review of Media Regulation, which specifically considered privacy issues. Media companies had the opportunity to both make submissions to that inquiry and appear before that inquiry, which they took.

So in the space of five years, media companies have been consulted four times on privacy issues. Like many a rentseeker, clearly some media companies think the only real “consultation” is when the government does what you want. — Bernard Keane

Timing is everything. You’ve got to feel sorry for Ben Naparstek, editor of Fairfax insert Good Weekend. Two Saturdays ago, GW ran a piece on Dr Who — only days after Naparstek was branded a “f-cking dalek” by Monthly editor John van Tiggelen. Then, on Saturday, the magazine ran a profile of environmental activist Miranda Gibson …

Unfortunately for GW — which goes to the printers early — Gibson came down from the tree on Thursday, two days before the mag hit newsstands.

The wonderful lawyers of Oz. Pushing aside the creative shortcomings of Disney’s Oz: The Great and Powerful — and boy, there are many — there is one scene director Sam Raimi gets absolutely right. The prologue of his prequel to Victor Fleming’s beloved The Wizard of Oz (1939) introduces us to a conniving, womanising, big-thinking circus illusionist (James Franco), who is chased by angry carnies and escapes in a hot air balloon. The balloon is swept up in a tornado and lands in the CGI-splotched land of Oz.

Shot in 4:3 ratio, in smoky black and white, the scene is a handsomely rendered old-school prelude to two hours of candy-coloured landscapes and 3D-enhanced screensavers. The original film similarly opened in sepia-toned monochrome (though it, of course, was not lathered in digital artifice). But the top brass at Warner Bros. (distributor of the 1939 film) were not beguiled by this beauty. Instigating a stoush that may have far-reaching implications for how film copyright law is enforced and understood, Warner’s lawyers have scoured every frame for ammunition that could be used to blow away the Big Mouse, then sip champagne while eating his cheese.

Absurd though it may sound, one of the reasons the opening of Oz: The Great and Powerful was legally cleared is because use of black and white cinematography is not against the law. A judgment call was made that the same could not be said about — wait for it — the film’s use of shades of the colour green.

Author L. Frank Baum wrote The Wonderful Wizard of Oz, a children’s novel, in 1900. This means characters such as Dorothy, the Lion and the Scarecrow exist within public domain. But the 1939 production adds elements the book does not have. And here’s where it gets tricky … — Luke Buckmaster (read the full story at Cinetology)

Front page of the day. “We’ve sought to harness the best traditions of newspaper design and our six decades of journalistic authority to meet the demands of today’s readers,” Australian Financial Review editor-in-chief Michael Stutchbury writes to launch Fairfax’s new-look financial daily, a week after The Age and The Sydney Morning Herald went “compact”. There’s nothing very radical on the front page, and everything is still where you expect it, but inside there’s certainly more colour and larger photos. Read Dominic White’s 1900-word feature on the revamp (Portuguese typesetter Mário Feliciano designed the new font, if you were wondering) or pick up the paper — which now costs $3.30, as Crikey revealed last week — and judge for yourself (subscribers now have access to a digital version) … 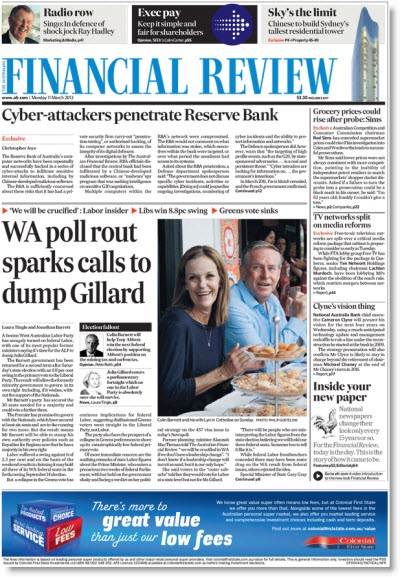 Surely “free speech” – as defined by our msm – means they’re being able to devote the use of their PR resources to get away with saying whatever they like, about whomever, and then using their edifices to edit out, of apparent existence, any contrary views to those they hold? Thus giving the impression of their omnipotence?
Going on their evidence at least?

Pale blue is a soothing colour – reassuring, safe. Do you think Abbott just has the one tie? It’ll get grubby pretty quickly. Not a good colour for keeping clean.

Steve Lewis, what a legend. Senior VP of the National Press Club!

Tells you all you need to know about the quality of the MSM in Oz.

Oddly that’s precisely the same concept of ‘consultation’ most communities have. Do what we want even if it’s illogical, unaffordable or illegal.