Was Prisoner X's real name Benjamin Burrows? Or Ben Allman? It's all very strange. Plus other political issues of the day.

Getting a third passport. I can’t work out why the Australian government keeps referring to a “Ben Zygier” in its reports on the death of Prisoner X in an Israeli jail. As I understand the report on the case issued this week by Foreign Minister Bob Carr the man’s name at the time of his death was Benjamin Burrows; at least according to his Australian passport. Says that report:

“Mr Zygier was issued passports in three names: his birth name and two other names following legal name changes. He only held one passport at any given time. Australians who have legally changed their name are advised to change all their identity documents and records, including passports. But if media reports prove to be true that Mr Zygier used his passport in the service of Israeli intelligence, this would raise significant questions about the appropriateness of this activity.”

No mention there that the Ben Zyglier who came back to Australia to pick up a new passport, first in the name Ben Allen and then, on a second return from Israel, in that of Benjamin Burrows, had legally changed his name back again to Zygier.

And how strange that our intelligence services were not tipped off by the Foreign Affairs officials who issue new passports that something strange was going on.

It has got to make you wonder about the assertions by the Australian government that it was angered to discover that Israel’s Mossad agents were using Australian passports as they went about their murderous tasks. More likely, it seems to me, we were willing accomplices in the deception that now casts suspicion on every Australian travelling in the Middle East on an Australian passport. Our official anger, methinks, is not at Israel passing its officers off as Australians but at being caught doing so.

Feeling foolish. I’m feeling foolish about not visiting Twitter often enough. I have missed the most important addition to my collection of campaigning politicians and children — Julia Gillard’s official Twitter photo.

And as I was there on Twitter I had to note the pictures posted of four-year-old Ruby, who wanted to meet the Prime Minister and ambushed her while having coffee. 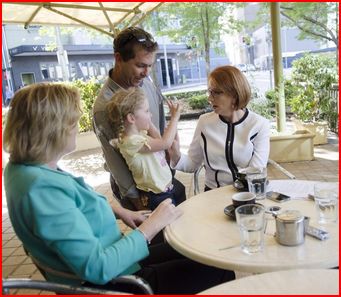 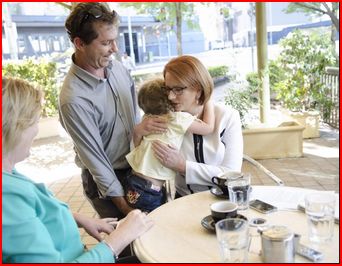 But what a wonderful addition to my election picture portfolios the Sydney Daily Telegraph presented with this campaign collage this morning: 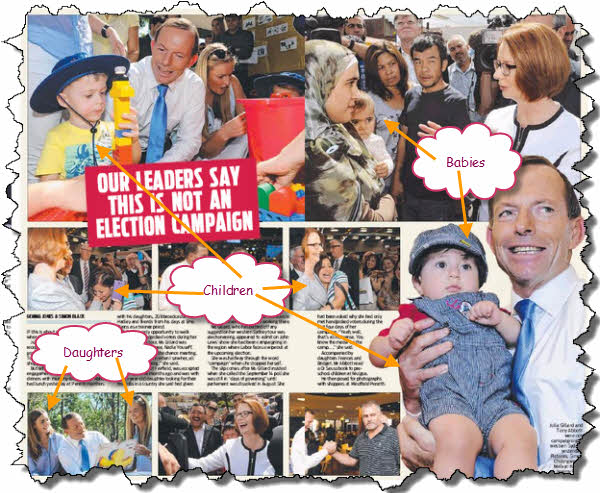 The only thing missing to make the collection complete was a fluoro vest.

A leadership-free week. One thing that the Prime Minister achieved by going to western Sydney was to put leadership speculation off the agenda. Hardly a mention of that subject all week.

Going for the underdog. The only thing going for Labor in this weekend’s state election is that it clearly has the status of the underdog, and dogs regularly perform better than expected. The Crikey WA Election Indicator puts the Liberal-led Coalition as a 96.2% chance. 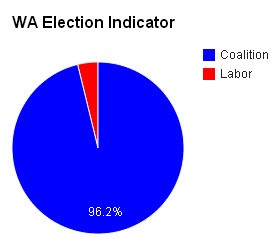 Still, I’m a bit of an underdog believer when it comes to elections and am risking a little, just a little, of my political betting winnings on the Labor outsiders at their $26 price. I don’t expect to collect, but watching my minor loss will help pass the time between Saturday night’s rugby league and the British soccer.

You will find a record of all my recent betting predictions at my political speculator’s diary website.

Australia vs. Israel: round one

New tensions for Australia and Israel

Politicians please take note: when photographed with a child/children you appear more phoney than usual and look like a jerk. Truly.