Pauline Hanson eyes an election comeback: can she do it?

Pauline Hanson says she'll run at this year's federal election. Does she stand a chance -- and can she make a buck out of taxpayer-funded public electoral funding? Crikey intern Carrington Clarke investigates. 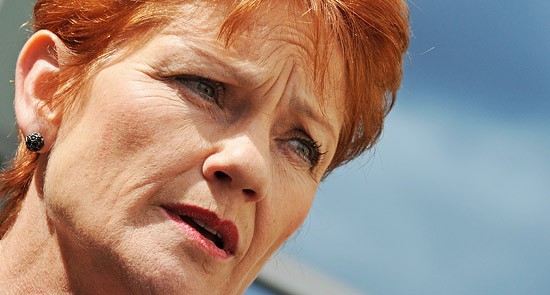 Pauline Hanson embarked on a round of media interviews yesterday to declare she’ll run for public office once again at this year’s federal election, as an independent in Queensland (she moved back to Ipswich last year). There are reports she’s aiming at a lower house seat, although that’s not confirmed.

Hanson waded straight in with unsolicited support for Julia Gillard’s stance on foreign workers, and opinions on gay s-x (hint, it’s “not for her”). But does she stand a chance? Or is this, as some cynics have stated, just a cash grab for electoral funding?

This will be the eighth state or federal election that Hanson has run in. Her maiden success as a disendorsed Liberal candidate in a previously safe Labor federal seat, in 1996, has been followed by six defeats. She’s been close to victory on a couple of occasions at the NSW upper house (narrowly missing out in 2003 and 2011). Her difficulty is that with all major parties generally preferencing against her, she relies on a strong primary vote to get her across the line. So far it hasn’t been strong enough.

Although she gets closer to victory at the state level (where the quota for election is lower), federal elections have been far more lucrative. This is because at the state level, public electoral funding is only paid out based on campaign costs, whereas at the federal level the money is paid out no matter what.

For federal elections a candidate or Senate group is eligible for election funding if they obtain at least 4% of the first preference vote. The amount to be paid is calculated by multiplying the number of votes obtained by the current election funding rate. The rate is indexed every six months to increases in the CPI. The current funding is 247.316 cents per eligible vote.

In her two previous runs for a Queensland Senate seat (in 2004 and 2007), Hanson has hit the 4% threshold, and between the two elections has received over $400,000 in federal funding (half of which was paid out to Pauline’s United Australia Party) .

Professor John Wanna from the ANU believes Hanson would struggle to win a Queensland Senate seat due to the role of Bob Katter’s newly formed Katter’s Australia Party, but might receive enough votes to secure another round of public electoral funding.

“Katter’s party is part of that same spectrum that she’s going for and I would be concerned about fragmentation of the vote. She might be able to receive between 50,000 and 100,000 votes but it will be difficult to win a seat without preferences?” he told Crikey.

If Hanson runs for the Queensland Senate and receives around 100,000 first preference votes, hitting the 4% threshold, then she can expect to receive about $250,000 in electoral funding. This is not dependent on how much she spends and as an independent there would be no chance of another awkward argument about the funding with pesky party members as happened after the 2007 election.

However, to win the spot she is probably going to have to secure a preference deal with one or more of the other parties.

Aiden McLindon, national director of Katter’s Australia Party, rejects the assertion that his party is going after Hanson’s previous supporters.

“We are a very credible mainstream party, we are not a party of protest. We are not a Left-wing or Right-wing party. We have support from the unions and see ourselves as replacing the old-school Australian Labor Party and the Country Party,” he told Crikey. He would not be drawn on whether the party would consider preferencing Hanson at the election, saying only he was “happy to engage with any person who supports the core values and objectives of our party”.

If Hanson is unable to secure a preference swap, the financially optimal strategy might be to rely on controversial statements to secure free press and then cash her Australian Electoral Funding cheque. But that would be very cynical.

Can’t she do something useful and get back into the fish and chip game??

We’ve mistakenly thought the standard couldn’t get any lower in the House of Reps.

While I am not an unalloyed fan of Hanson and regard her as a bit too intellectually unsophisticated to carry her agenda very far beyond the redneck districts of Queensland, I think the suggestion that she become politically involved in politics to rip of the electoral system is a bare faced slander.