All the latest from the ABC staff-elected director race. And other media tidbits.

Peacock soars in ABC board stakes. Current affairs journalist Matt Peacock has firmed as the frontrunner to win the coveted position of ABC staff-elected director after securing the backing of one of the two unions representing ABC workers. The Community and Public Sector Union has decided to endorse Peacock for the position and will encourage members to vote for him in the ballot which opens next Friday.

CPSU National President Michael Tull told Crikey Matt Peacock was the strongest of the nine candidates in the race: “Matt is an extremely well-regarded and authoritative journalist who is known and respected by both the ABC-watching public and by staff,” he said. “This is a very important position and one that comes at a crucial juncture for the ABC staff who are under pressure to do more with less.”

The Media, Entertainment and Arts Alliance has yet to formally support a candidate. But in an email bulletin to members earlier in the week, the union sent a link to Peacock’s election pitch and noted that former staff-elected director Quentin Dempster is backing him. — Matthew Knott

New-look AFR for Monday. Your first look at the new-look The Australian Financial Review editions, which will hit stands from Monday. After the redesign of The Sydney Morning Herald and The Age, Fairfax’s financial daily has been spruced up Monday-Friday and given a more radical rebrand on Saturdays. The press material promises “a new font, image selection and composition, sharp page layouts, clear navigation cues and new section mastheads”. As Crikey revealed yesterday, readers will have to pay extra for it — the cover price of the Monday-Friday will rise from $3 to $3.30. 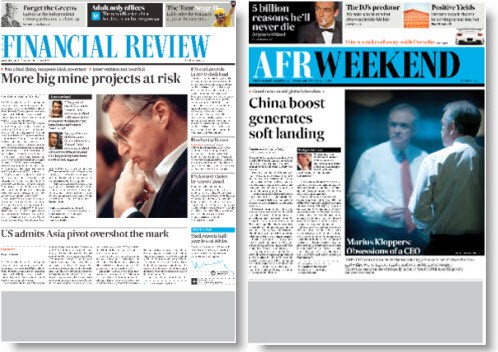 Publisher vows to pay staff super. As Crikey revealed on Wednesday, Australia’s largest gay and lesbian publisher is on the verge of being wound up as staff complain they’ve been short-changed on their superannuation. After that story was published, Crikey received a written statement from Evolution Publishing company director Mark Anthony:

Anthony says the company’s publications will continue to operate as normal regardless of the Federal Court’s decision in the March 20 insolvency hearing. — Matthew Knott

Rundle: Guardian of anti-Australianism. Your correspondent is not the only one to be awaiting with interest the arrival of The Guardian in Australia, a country that tends to appear in the paper only as a convenient punch-line (or when Julian Assange has done their spade-work for them). My good friend Brendan O’Neill has rallied to the cause in The Spectator Australia, warning Aussies what they are in for. Mind you, there’s a lot of it about in the UK media.

Part of Brendan’s argument draws on an argument I made in an article about the phenomenon years ago: that English anti-Australianism, tiresome and minor though it is, is of significance because it is a way for Bloomsburyish left-liberals to sneer at the English white working-class, whose culture — tabloids, reality shows, cars, suburban living, attitudes to ethnicity and gender at variance with those of the Sussex University cultural studies department — is what they imagine Australia to consist entirely of. The Bloomsburyish sub-class feel encircled and undermined by that culture, but unlike the kernel of blimps at The Telegraph and Daily Mail, they can’t hate on it openly. So it is offshored (like The Guardian‘s corporate arrangements!) to a far away country of which they know little.

I wrote the piece saying all this as a reply to an idiotic piece (by Patrick West, a man whose columns were so loathed by even Spiked‘s firmest supporters we speculated he must have had photos of the editorial crew doing something shameful — recycling, for example) that had neatly condensed every cliché of Australianism in a publication I admired — and still do. The publication? Spiked. The editor? Brendan O’Neill. Funny old world, whichever end of it you’re from. — Guy Rundle

Correction of the day. It was the story that had Melbourne’s latte sippers frothing with outrage earlier this week: classy restaurant Vue de Monde, Age readers were told, charges $10 for a coffee. According to the Fairfax compact, rival nosheries Grossi Florentino and the Press Club charge $8 and $5 respectively for a caffeine fix. The restaurateurs in question were none too happy with the piece — especially after copping verbal and written abuse from readers. Unfortunately for The Age, a key point was not included in the article: the expensive coffees in question come served with “hand-made biscuits”.

The story has now been pulled from Fairfax’s websites and the following correction ran on page 16 of today’s paper:

As well as the aggrieved chefs, The Age should probably shout retired cyclist Mark French a coffee — and some petit fours — after admitting the following howler today: 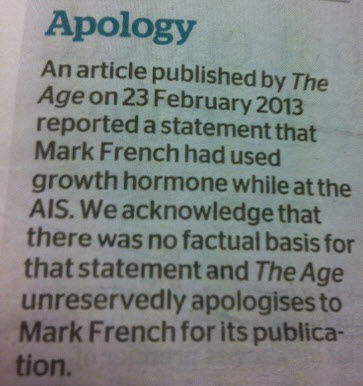 Front page of the day. On the last day of campaigning, The West Australian sets the agenda for the state’s voters … 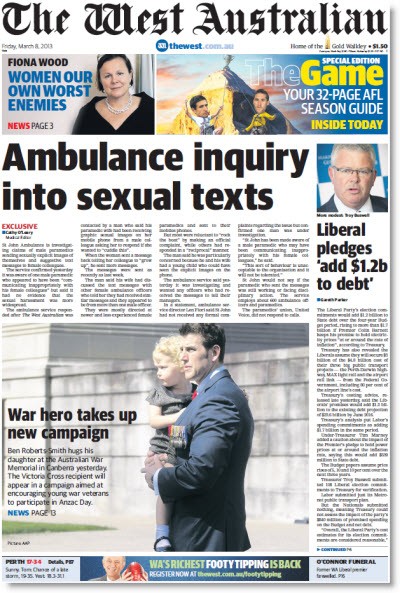