Why did the Liberal Party cut Ted Baillieu loose? You have to examine the factional background of conservative forces in Victoria. The Right rump never much liked him. 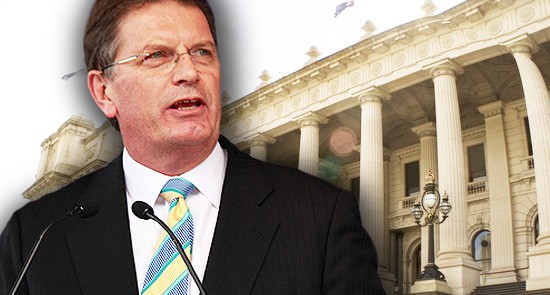 To understand yesterday’s political assassination of Ted Baillieu, you have to understand a bit about the factional background of the Victorian Liberal Party.

For about a decade — say 1997 to 2007 — two groups fought for control of the party organisation. I call them the Krogerites and anti-Krogerites, but you could just as easily call them “Team X” and “Team Y”; they were just groups of people, bound together by complex webs of history and chance personal factors, who competed for positions and jobs and preselections.

The anti-Krogerites had control under successive state presidents Baillieu, Joy Howley and Ian Carson until 2003, when the Krogerites took over and Helen Kroger became president.

Like most factional contests, it was more obvious in the organisation than in the parliamentary party. Party leader Denis Napthine (who, in a remarkable turn of events, is now Premier) was collateral damage when he was deposed by Krogerite Robert Doyle in 2002. Doyle went on to lose an almighty landslide and was eventually replaced by Baillieu in 2006.

About five or six years ago, conflict within the organisation began to die down. The retirement of Peter Costello, who had been a mainstay of the Kroger group, was one factor; so was the election as president of David Kemp, who, although backed by the Krogerites, was more of a consensus figure. But there was also just sheer fatigue: people eventually get sick of fighting over someone else’s decades-old personal grudge.

The factional conflict had never really been about policy or ideas.

Those who identified strongly as right-wing tended to join the Krogerites, while those who thought of themselves as on the Left tended to join their opponents, but neither side ever talked much about ideology. Even among the Krogerites, attitudes were common that would have been out of place in the Liberal Party in most other states: they were often pro-choice, pro-republic and civil libertarian.

In the meantime, however, the party was changing. It would take a sociological thesis to explain exactly how and why, but membership was in a steep long-term decline, and a declining membership meant more influence for the ideologically driven. There was generational change, and the perceived success of John Howard’s “One Nation-lite” strategy was attracting a different breed of members — self-consciously conservative, often evangelical Christians, often from blue-collar backgrounds.

They didn’t share the ideological common ground of the older members, but they were good haters, and what they hated was “the Left”. Lacking any better target, they came to identify Baillieu as the representative of everything they disliked.

Baillieu was as unideological as they come, but because he was from the organisational wing he tended, more than most parliamentarians, to behave like a factional player. The Krogerites, who had run out of worlds to conquer in the organisation (and who were increasingly divided among themselves), kept up a constant low-level sniping at him. It obviously rubbed off on their younger members.

And then there’s News Limited. Relentlessly waging a culture war against “the Left”, it picked Baillieu as its special target. I pointed this out as early as 2006, noting the strange paranoia of some articles in The Australian that had equated support for legal abortion and gay civil unions (things that someone of Baillieu’s background would find quite uncontroversial) with “radical Greens-style social policies”.

It got worse over time; the tone of political debate deteriorated and the alliance between News Ltd and the Liberal Party’s Right rump got ever stronger. Three years ago it disposed of Malcolm Turnbull; yesterday it got Baillieu.

Perhaps it’s a long bow, but it’s hard not to see a parallel with other targets of intense right-wing hatred: Bill Clinton, Paul Keating, even Barack Obama. Precisely because they were so obviously not from the traditional Left — not socialists or anything like them — they attracted a particular sort of vitriol, as if their opponents dreaded being forced to examine the basis of their own position.

Baillieu certainly had his faults; he could legitimately be attacked on many grounds. But none of them seem to remotely justify the description of “communist” and similar terms that have been routine among sections of the Liberal Party. Those attacks tell us less about him and more about the insecurities of those who made them.

Geoff Shaw, the man who actually pulled the trigger yesterday, is a classic loose cannon, so it would be unfair to paint him as representative of any group. Nonetheless, it’s symbolic of what the Liberal Party has become that someone so far out of the political mainstream — a fundamentalist who once equated gay s-x with child molestation and murder — should have acquired such pivotal power.

Perhaps if Baillieu had won a bigger majority, none of it would have mattered. (Although he still would have had the Nationals to contend with, a whole new topic.) Even now, if Victoria didn’t have fixed terms, Napthine would have the option of a snap election to cut Shaw loose and dare the Herald Sun to support Labor.

Instead, it’s now become Shaw’s choice as to when he brings down the government. Baillieu wasn’t willing to serve under those conditions, and frankly, who can blame him?

The Victorian Premier might wish he had some Greens around

At last, a win for Robert Doyle

Small field for a blue-ribbon seat

I wouldn’t attribute too much of this to policy and ideology. Poor opinion polls and a Victorian recession endangers all leaders. Ted’s moderate positions-usually to the left of Brumby was accepted as long as he could win elections.

Steady decline in Liberal party members and a takeover by the lunatic fringe right allows the likes of Shaw to get preselected.
Usually the wing nuts only get put up in un-winnable seats. Given the current federal polls, we are likely to see some genuine tin foil hat wearing freaks heading to Canberra after the election.
Throw in their facebook pages, twitter accounts and blogs and its Good news for political satirists.

Yep – nobody can hold a candle to the right of the right when it comes to hating.

Nothing much positive to contribute, just fear and loathing.

You could see this coming a mile off when Baillieu won. Way too moderate – useful to win an election for them, but once in, the road was clear for News Ltd to start waging the regime change campaign on behalf of the malignant underbelly of the Libs. Whatever it takes.

Kind of funny though how the Liberal Party hates both liberalism and old-school responsible conservatism.

Except that Baillieu’s response to Gonski was mischievous, negative but hopefully not as destructive as it was designed to be. Surely that would have attracted the support of the Victorian Liberal Right and Murdoch’s mouthpieces.

Interesting that Tony Abbott today said this was very different to Gillards disposal of Rudd when what seems to have caused it are a dysfunctional leadership style that paralysed the govt,the sniping of some factional leaders against someone hwo is essentially unaligned and extraordinary pressure form News Ltd.