Crikey calls it on the next Pope, and other news and views picked up along the way.

No harm done out west. Sitting here in Canberra there’s no way I can judge how the masses are reacting to the prime ministerial western tour. The television images (as distinct quite often from the accompanying words) have looked okay to me in portraying a determined leader out selling her messages. I’d at least be giving her marks for trying and the supercilious commentary from the following press pack is of far less importance than the pictures.

Liberals doing their best to help. Internal bickering in state branches of the Coalition are an unexpected bonus for Labor. So too is the increasingly confusing messages from the federal Liberals about their own spending plans if and when they achieve government. Tony Abbott and Joe Hockey need to spend more time together to get their lines uniform.

What is it about politicians and children? Perhaps it’s because they don’t ask hard questions. Or if they do you can just giggle and move on without offence being taken. Whatever. Tony Abbott enters our election campaign portfolio with this effort from his visit to Adelaide yesterday: 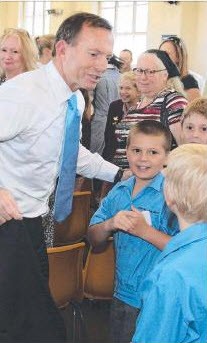 Religion is a wonderful thing. Some words of warning this morning via the Middle East Media Research Institute, as Sheik Yousuf Al-Qaradhawi addresses the faithful. It was referred to me by You Tube telling me to “check out the latest video from your channel subscriptions” although I notice it was posted back in 2007. 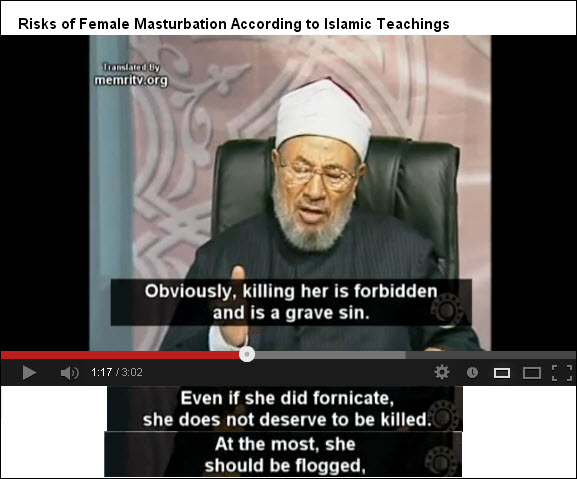 Backing the African candidate. I noticed in the commentaries on the papal election that the Rome-based specialists thought that the earlier the conclave was held the more likely that an Italian working in the Curia would get the nod, because they were better known to to other cardinals. The news overnight that there was as yet no agreement on when the Conclave would begin thus suggests that perhaps a non-European will become Pope. I”ll be taking a punt on Ghana’s Peter Turkson who, as the president of the Pontifical Council for Justice and Peace since his appointment by Pope Benedict XVI (after serving as Archbishop of Cape Coast) is something of an each-way proposition.

The latest Crikey Election Indicator has Cardinal Turkson as the second favourite. 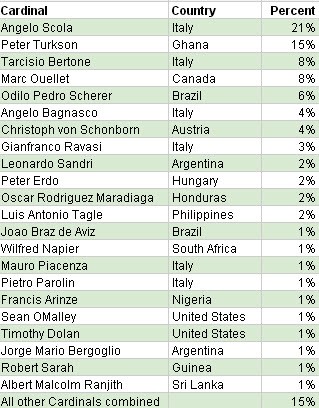