Russell Skelton has issued a bizarre defence of Marcia Langton in the new-look Age, and Mia Freedman talks penis blogging.

Rundle: Age‘s bizarre Langton defence. Days after The Age went tabloid, its reporting appears to have followed suit. Take the bizarre and self-contradictory defence of Marcia Langton by Russell Skelton. Responding to Crikey‘s story revealing Langton had not declared in her ABC Boyer Lectures that mining giant Rio Tinto was funding one of her major political projects and that big Rio was praised effusively in the Boyers, Skelton wrote:

“According to her critics, Langton’s sins are many: She failed to declare in her lectures that mining companies helped fund her research into the politics of poverty and plenty in the Pilbara.”

He then went on to catalogue the more thematic criticisms Boris Frankel (in Arena Magazine) and others mounted at Langton’s broad criticism of the Left, Greens, etc. By Skelton’s reckoning this failure to disclose financial interests in the lectures was of the same level as the accusations that:

“… she betrayed her Trotskyite roots by stating not all miners were villainous exploiters of indigenous people … Further, she had the temerity to take a hefty swipe at environmentalists …”

They bloody aren’t the same, and I know that because I read about the iniquity of undisclosed interests in, erm, The Age, which days before had splashed with a huge exclusive on state Planning Minister Matthew Guy having undisclosed lunches with $10,000+ Lib donors with planning applications in process.

Langton’s non-disclosure within the Boyers is not of that order, since she has made her links with Rio clear elsewhere. Skelton notes that “for years” there have been rumours about Langton receiving personal payments from Rio, but he discounted them because he “knew her”. Nevertheless, in the tradition of I.F.Stone and Watergate journos Bob Woodward and Carl Bernstein, he felt some investigation was in order, 2012-style: “… as an exercise I hit Google”. Christ, there goes this year’s Gold Walkley. In doing so, Skelton establishes Langton has received extensive support from Rio for her research into Aboriginal poverty. Should she declare that in the actual text of the Boyers? Skelton seems to think so, as he demonstrates at the end of his article:

“Russell Skelton is a contributing editor of The Age. Rio Tinto assisted with his travel in the Pilbara.”

That is an own goal of Ronaldo-esque proportions, for two reasons. Firstly, because it’s just dog-bollocks dumb on the face of it. Secondly, because much of Skelton’s article is devoted to praising Langton for refusing the “special treatment” hitherto given to black people on account of a history of oppression (that’s why Langton now accuses critics of her policy proposals of “racism”). On the face of this article, it appears Skelton, embarrassingly undistanced from Langton — “If she had a second PhD, it would be in refusing to tolerate fools of any kind.”* Gaaaaaaaaack. — has extended exactly that special treatment to Langton. And The Age has joined him in it. — Guy Rundle

*Connoisseurs of sycophancy may wish to compare this line with the great ad campaign by Dos Equis beers about “the most interesting man in the world”: “His beard alone has experienced more than a lesser man’s entire body.” Stay thirsty, my friends.

Climate sceptics rule The Fin? We’ve been noticing a fair few missives of this ilk on the letters page of The Australian Financial Review (mind you, it seems the paper gave little coverage to the actual report in question, The Climate Commission’s Angry Summer — although bitter rival The Australian did). This one appeared yesterday: 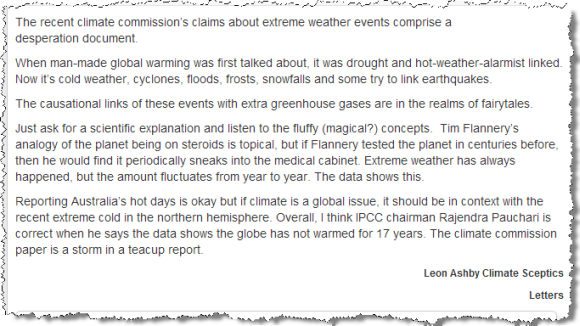 Some climate watchers have suggested this might be something to do with the influence of The AFR’s leader-writer Mark Lawson, who writes comments on climate change like this:

“A better approach, if anyone is interested in sensible policy in greenhouse issues, is to dump emissions trading and carbon taxes altogether and concentrate on adaptation measures, if any are required.”

Britain, “which is subjecting its citizens to increasing pain in order to reduce emissions …”

“But any measurement of sea-level increases over previous decades shows that actual increases to date have been tiny. Although sea levels will continue to rise, as they have been doing since the end of the last ice age …”

Read Lawson’s tussle with scientists over climate change in the comments section of this story on The Conversation.  But conspiracy theorists might be overegging the pudding here — we’ve heard The Fin doesn’t actually get a lot of letters, plus the fact the original Climate Commission report was not covered might have nothing to do with Lawson. It could be the commission didn’t get an embargoed copy to The Fin in time. — Cathy Alexander

‘Mummy blogger’ wars. Jane Caro railed against the term “mummy blogger” in Crikey last year and Mia Freedman has had enough, too:

“In the past few months, a journalist at The Australian Financial Review has made up a new term for me: p-nis blogger. Joe Aston — who I’ve never met — takes perverted pride in using this description virtually whenever he mentions me in his column, which is perplexingly often. Sometimes several times in a week. That’s when he’s not dismissing me as a mummy blogger. Or referring to a woman as accomplished as Lisa Wilkinson as ‘dishwasher to commie-dana purveyor Peter FitzSimons’. When I mentioned the ‘p-nis blogger’ tag briefly in passing during a speech I gave at the Sydney Institute last week, the following day this appeared in Mr Aston’s Australian Financial Review column: 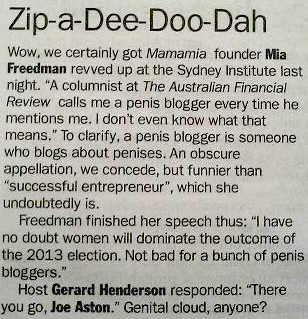 “And perhaps this gives us our best clue as to why some people insist on using patronising prefixes like p-nis-blogger and mummy blogger and dismissing female discussions as ‘mummy wars’. Because they can. Because Joe Aston’s editor has apparently never said, ‘Hang on a minute. This is a respected newspaper, not kindy, where it’s funny to see if you can say a rude word without getting into trouble. You don’t need to call women stupid names to make a point. Ever.’ As for the use of the prefix mummy to describe something, can I make an even broader suggestion? There’s only one person you should use that word about, and that’s your mother.”

Aston, we’re sure, will fire back in the Fin shortly. The stoush between these two is fast approaching Latham v Henderson proportions. 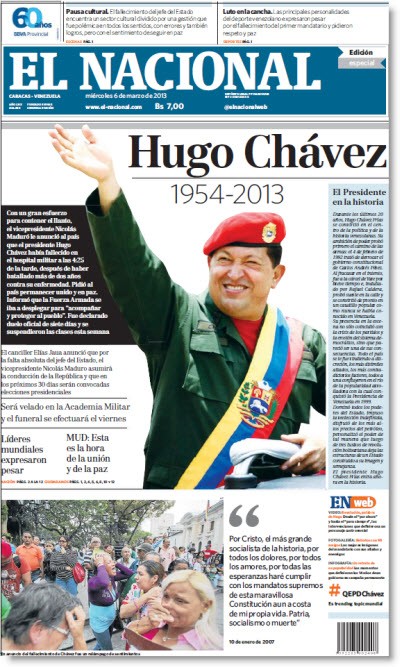 The Langton piece was an embarrassment simply confirmed the decline of the masthead, and when combined with the companion piece about Rio, did little to allay suspicions about how its major shareholder might impair objective coverage of the mining sector.

A convincing treatment of the issues is impossible when you give the task of explicating a running multifaceted controversy to someone who is unable and unwilling to actually explain the position of one side with any objectivity.

Skellor is, of course, entitled to come down stridently in favour of Langton in the dispite, but basic journalism requires that you explain the issues which extend beyond disclosure in the Boyer Lectures.

The fawning hagiographical language about Langton and the strawman contempt injected into framing the other side simply cheapened the piece and robbed it of any possible persuasive force.