Now that we're clear that slashing public spending does real damage to the economy, what do we know about the Coalition's fiscal policy? Not much. 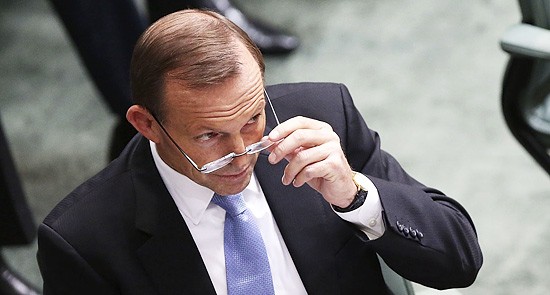 If there’s a lesson to be learnt not merely from the austerity-induced depression in Europe but from the sluggish economies of Queensland and Victoria revealed yesterday in the national accounts, it’s that slashing public-sector spending has real-world consequences — consequences in terms of economic growth, employment and confidence.

It’s a lesson many fiscal discplinarians appear not to understand. Take veteran commentator Geoff Carmody in The Australian Financial Review today, complaining Labor should have massively reduced its stimulus program in response to the financial crisis in order to keep the federal spending down. In hindsight, he says, we were spending money on stimulus just when our terms of trade were peaking.

Putting aside that’s it’s always dead easy to manage an economy in hindsight, the direct consequence of Carmody’s prescription would have been tens and maybe hundreds of thousands of more unemployed Australians, particularly in the construction sector, as work dried up, businesses went to the wall and confidence in one of our most important economic sectors collapsed and contaminated the rest of the economy.

Or perhaps people like Carmody — and the rest of fiscal ferocity brigade — do understand the lesson and just don’t care. There’s a righteous tone of self-flagellation that many austerity advocates adopt, as though voters should be punished for electing politicians prepared to pander to their wishes and engage in unsustainable spending. Maybe that’s legitimate, if rather self-defeating, in places where fiscal laxity has indeed been the order of the day, like Greece. In Australia, where government of all persuasions have been reasonably disciplined and public debt is low by international standards, it’s absurd. But conservative politicians have made fiscal rigour their point of difference with Labor, even when they’ve followed Labor government like that of NSW which, despite its many vast faults elsewhere, kept tight fiscal control.

The federal Labor government has found itself doing the equivalent: anxious to eliminate fiscal policy as a point of difference with its opponents, it has slashed spending as well. The result is both state and federal governments retrenching, a double blow to economies like Victoria’s and Queensland’s, where conservative governments have been determined to inflict fiscal pain to differentiate themselves politically from the ALP.

Whether a Liberal government in Canberra would follow the same path remains a confusing issue, and depends on whom you listen to. Opposition treasury spokesman Joe Hockey is a fully paid-up member of fiscal flagellants. He has railed at the “age of entitlement”, promised to cut 12,000 public servants for starters and repeatedly emphasised that the Coalition would cut spending. He said he’d also preside over a(nother) commission of audit after the election to go through Commonwealth functions and identify which ones can be dumped.

Listen to Opposition Leader Tony Abbott, and you sometimes get the same message about a government committed to “living with its means”. Other times, Abbott is keen to assure everyone everything will be fine. The tax cuts and pension rises that formed part of the carbon price compensation would be kept, he declared the other day, creating a rather sharp contrast with Hockey, who’s been repeating that any compensation for the carbon price won’t be necessary once the carbon price is removed. “People will be better off under us,” he said.

It’s a decided contrast in rhetoric. Hockey’s wielding the lash, determined to flog the budget into shape. Abbott is offering a magic pudding, in which everyone will be better off. Contrasting messages isn’t a new thing in politics by any stretch; indeed, however much former PM Paul Keating railed at former PM Bob Hawke’s “tripping over camera cables in shopping centres”, governments can benefit from having a gentler, softer leader in contrast to a harder-line economic deputy.

But it’s impossible to determine whether the contrast within the Liberals is only at the level of rhetoric and Hockey and Abbott are genuinely on the same page on what fiscal policy would be if they’re elected, or whether it’s deeper. Does Abbott, famously agreed by figures as diverse as ex-Liberal leader John Hewson and former treasurer Peter Costello to be an economic illiterate, actually think that his election will magically reset the economy to mid-2007, with vast revenues flowing into Treasury? Hockey, at least, seems to have worked out that fiscal policy won’t be the doddle it was in the last John Howard term, when the only challenge was whom to shovel money at.

Nor can we tell whether Hockey’s commitment to fiscal rigour is of the come-what-may variety, and he would follow the diktats of the austeristas and slash spending even if the economy faltered, or exports collapsed, or the dollar shot up — or whether he’s learnt the lessons of austerity, that when an economy is softening, you can’t cut your way to fiscal rectitude, let alone growth.

The reason we can’t tell is because the Coalition refuses to offer anything concrete about its fiscal strategy, and won’t until, probably, just days out from the election. It’s happy to risk the occasional stuff-up like this week’s, with Hockey blatantly contradicting his leader, rather than subject its spending and savings plans to genuine scrutiny, the kind of scrutiny you can’t get in a couple of days at the end of an election campaign.

Abbott budget reply: mind the gap between rhetoric and reality

“I’m not a lying Ranga” appears to be the official policy of the LNP…
“In your guts you know he’s nuts” should be the counter..

And interest rates will always be lower under a Liberal Government! (derisive snort) But probably true once Abbott and Hockey slash and burn us into a recession!

“Austeristas” – I’m going to steal that one. Thanks.

Perhaps one can determine the Coalition’s position by anticipating how its front bench would vote on austerity.

Thanks for scaring me to death Bernard! Are we about to get the recession we didn’t need to have?

On your comment regarding the election of the liberals resetting the economy, well that is exactly what the average punter thinks because that is the loudest message their being sold.