Help us identify this video of 'police' attacking two men overseas ... which paper is going up in price again? ... we tell you who's first in line to get The SMH ...

Police brutality, here and abroad. Allegations of police brutality against a participant in this year’s Mardi Gras have surfaced after someone recorded the incident. A Crikey reader alerted us to another concerning YouTube video of people (who may be police officers) attacking two men with sticks, a hammer and a dog. It’s labelled as an attack by Fijian police in March this year, although our source says it took place last September (some of the comments on the video are in Fijian).

Our source claims the victims had escaped from prison, and one had his legs amputated after the attack:

“The draft Fijian constitution was shredded and burnt in January and tensions are bubbling, albeit slowly, and this video could prove to be a big issue in coming days,” our source said.

You can read a NZ media report on the video here — Fijian police (and Amnesty) are apparently investigating the incident. The Fiji Democracy Now blog looks into the incident here.

We don’t know anything more about the video, but if you can help us confirm what is going on and who might be carrying out the attack, we’ll put questions to the relevant authority. Chances are it will make little difference, but you’ve got to try. Certainly the Mardi Gras incident, and this one, show how the ubiquitous presence of mobile phones can help gather evidence of potentially inappropriate or illegal behaviour by authorities.

Authority with style (at a price). The newspaper with one of the world’s most expensive cover prices is jacking up the newsstand price again. Crikey hears — though Fairfax won’t confirm — The Australian Financial Review will cost you $3.30 from next month, a 30¢ hike on the current cover price. (There was some talk at Fairfax HQ of a 50¢ rise, we’re told by insiders, but management settled on 30¢.) Chief competitor The Australian remains at $2. 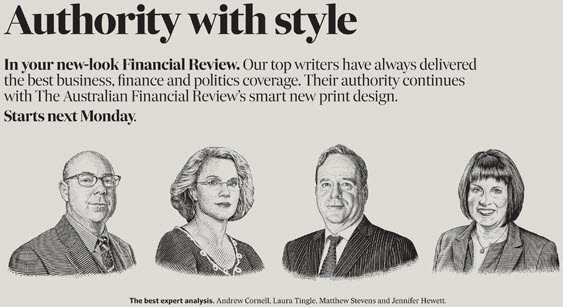 At least readers will get a redesigned paper for their higher investment — The AFR is promising a “smart” new design from Monday. It looks like the images will be sketched Wall Street Journal-style. We wonder what the Murdochs will make of that …

Readers to the back. Sydney Morning Herald readers were disgruntled to receive their home-delivered tabloids after 10am yesterday — one mole was chatting to their newsagent at Chippendale, who “says he was told to service Fairfax HQ first. Hope they were happy with it”. At least the readers know where they stand, i.e. at the back of the queue.