The skies clear as China changes guard, but what lies beneath?

China's annual "Parliament" is underway and all eyes are on the country's two new leaders. Will the new guard shift the focus from internal stability towards economic reform? You might have to wait to find out. 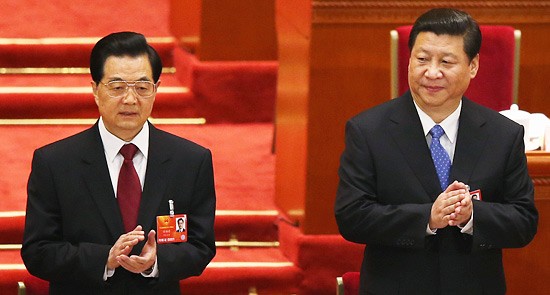 At around midnight in Beijing on Monday, the eve of China’s annual National People’s Congress, a spectacular half moon rose in the sky. The sight was so clear you could almost pick out the craters. In a city that has just suffered its most polluted winter in living memory — making the promise of post-Olympics Beijing as a low-smog environment the latest of the Communist Party’s horrible jokes — it underscored the party’s great strength. Control.

The NPC is nominally China’s Parliament. It meets once a year in Beijing to pass laws and make senior government appointments — but these are all first signed off by the Central Committee of the Communist Party. This year’s NPC is a farewell to two long-standing leaders (Hu Jintao and Wen Jiabao), and a welcome to two new ones: incoming chiefs Xi Jinping and Li Keqiang.

The annual NPC and its sister forum the China Peoples Political Consultative Committee are widely known as liang hui (two meetings), and officials use their weather-making magic to get clear skies. Same deal for National Day on October 1.

You see control everywhere here. There is a cop shop in very fourth street. Every residential compound has some sort of guard and gate. There are a bewildering number of blue glass cones that house video cameras, sitting on building and lamp post.

But a lot of this is just for show, to give the impression of permanent control. The police are very friendly, they are helpful and in four years I have yet to see one of them get aggressive or, God forbid arrest anyone in a regular residential area. Of course that not to say it doesn’t happen and the stories of what goes on behind closed doors in police stations, state security (secret police) locations and notorious “black jails” are legion.

That was one of outgoing premier Wen Jiabao’s key messages yesterday as he delivered his tenth and last work report to the NPC, in the cavernous Great Hall of the People to the 3000 hand-picked delegates (about 75% from the Communist Party; the Peoples Liberation Army has the largest single group).

The focus on internal stability is now the singular the hallmark of China’s Hu Jintao/Wen Jiabao decade, which is coming to a close now. Economic reforms took a back seat. Yet discontent continues to grow, roiling beneath the surface of stability. If people were happy, would China really need to constantly ramping up its police, secret police and paramilitary across the countryside?

This year Wen said that spending on domestic security will increase 8.7% to 769.1 billion yuan. For the third year in a row it has a bigger slice of the budget than the armed forces.

A recent US Security and Intelligence report estimated that the country’s real figure — it does not include space agency programs or spending on new weapons in its regular defence budget — was as much as 60%  higher.

“China’s peaceful foreign policies and its defensive military policies are conducive to security and peace of Asia,” Fu Ying, spokesperson for the NPC, said. “It seems China needs to explain every year to the outside world why we are strengthening national defence and why we are increasing military spending.”

Many in the region are not so sure.

The biggest slab of Wen’s speech was a dry recounting of numbers, glancing over his shoulder to tot up the number of airports and train stations. He backslapped himself for the most modest of beginnings of a social safety net that still does not catch all Chinese — and when it does, enables them to cling to life somewhere around the nominal $1.25 a day poverty line.

There was the now annual admission that the Chinese economy is not in great shape: growth, inflation and other economic targets are more or less the same as last year, a message which sent global financial markets plunging. Indeed China’s economy is now bumping along the middle. But what to do next is now not Wen’s problem and accordingly there was little sign of the reforms that incoming leader Xi Jinping has been promising since he took the top party job last November.

All the polices, laws and personal changes the NPC signs this time around are inked by the Party’s Central Committee in the weeks before it’s held. And the real policy shifts are signed off by the party plenum held in October each year so it will be this coming October, when the new bosses have settled in, that we’ll hear substance from them.

Still, the NPC will trundle on over the next 10 days or so to its big bang finish when Xi Jinping will be elected President. Li Keqiang will be named premier.

Wen was once secretary to reformed Party chief Zhoa Ziyang — the man sacked and banished in 1989. Wen was in the famous photo of Zhao tearfully trying to get the students in Tiananmen Square to go home as he knew what was coming. That he could have recovered from this and ascend to the height of premier is a breathtaking political achievement; he’s the ultimate pragmatist. But by casting himself as reformer, he has set himself up as a major disappointment. And in that he has succeeded.

Next week, his successor Li Keqiang will hold the NPC’s wrap-up press conference. It’s one of the hot tickets of the year by virtue of the fact that China’s premier is the only member of the Politburo Standing Committee to ever face the foreign media. Last year we got a garrulous Wen effectively previewing the Bo Xilai arrest that would happen the next day. This year we will get our first good look at his successor, rare in that he’s a fluent English speaker. Li has already carved out “urbanisation” as his theme — is he setting himself up to be a disappointment as well?