The growth goes on. It really is remarkable that as Australia’s economic growth continues to outshine most of the developed world that the government is apparently held in such low esteem. Especially puzzling to me in this morning’s gross domestic product figures is that New South Wales, where the government is polling so poorly, is […]

The growth goes on. It really is remarkable that as Australia’s economic growth continues to outshine most of the developed world that the government is apparently held in such low esteem. Especially puzzling to me in this morning’s gross domestic product figures is that New South Wales, where the government is polling so poorly, is growing respectably while Labor continues to lead in Victoria which is going backwards.

Kevin the rort. Julia Gillard would have wished for a better backdrop for the Herald Sun’s picture of her at yesterday’s funeral, which provided a new meaning to her earlier comments on the system of 457 visas. 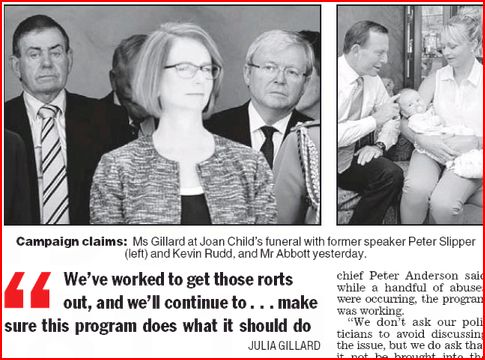 Tony Abbott was shown in friendlier circumstances as we add to our portfolio of politicians with babies.

Testing whether bigger is better. And now for a real test of grassroots democracy: do people really think that when it comes to democracy that bigger is better? Some of the good burghers of Mareeba in north Queensland were none to happy when their own little shire was amalgamated with neighbours to become part of the Tablelands Regional Council. They raised their voices loud enough to be given a referendum on whether the amalgamation should be undone.

Saturday will be decision day, and the Cairns Post has got into the spirit of things and conducted an opinion poll. And when a paper has spent the money, where else can you get value for it but by putting the findings on page one? 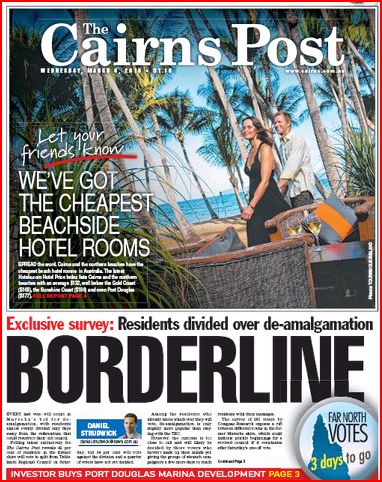 What about me? Julia Gillard is discovering a variation on nimbyism as she promises her way around the west of Sydney. Let’s call it “wambyism” or What About My Back Yard.

I detect from the evidence of the letters to the editor columns that there is considerable jealousy from residents of other places that they are missing out on the goodies. I suppose it proves that if you win some you can lose some.

I’m no photoshop expert but that SMH photo of the PM looks like it has been done over. Simply look at the light she is standing in (even squinting) and look at Slipper and Rudd. Both are clearly not standing in the same light. And both of their poses look familiar.

Rudd is also out of proportion to the men behind him.

I agree, photoshop for sure, Slipper & Rudd are too hard edged. How crass is that!