Our sordid triangle of xenophobia over 457 visas

Labor's exploitation of the 457 visa issues is just part of an attempt by all three parties to exploit immigration fears. Politicians are accusing each other of being soft, as the immigration debate plumbs new depths.

If you’re going to play in the space of bigotry and xenophobia, it’s best to come prepared. At a media conference yesterday, Immigration Minister Brendan O’Connor struggled to explain exactly how the 457 visa category was being rorted. He offered a couple of anecdotes, and said there’d been over 100 sanctions under the program.

That’s a program that currently sees around 100,000 visa holders at any one time. Even the numerically challenged can see that’s one case in a thousand, and probably far less, assuming O’Connor was using a total rather than an annual figure.

It’s less than a year since the Prime Minister professed surprise that Ministers Chris Bowen and Martin Ferguson had implemented cabinet-agreed policy on Enterprise Migration Agreements to allow Gina Rinehart to bring in workers for a WA mining project, to the fury of unions and the amazement of senior Labor figures who were astonished at how the government could turn what should have been a good news story into yet another self-inflicted wound.

Now Bowen’s successor is leading the charge against 457s. All policy coherence has been chucked aside in favour of election strategies.

More to the point, as LBJ remarked, don’t get into a p-ssing contest with a polecat. If you’re trying to out-xenophobe someone like Scott Morrison, a foul grub who feels no shame at claiming asylum seekers bring in typhoid, complains about relatives attending the funeral of victims of a boat tragedy and compares asylum seekers to the worst types of criminals, you’re wasting your time. If anything, it merely further embeds xenophobia in the political agenda, an issue that the Coalition will always more successfully exploit than Labor.

Still, it targets a segment of voters that Labor hasn’t paid much attention to for a decade, conservative blue-collar voters who have struggled in the post-reform economy, the sort who were attracted to One Nation and to John Howard’s social conservatism and demonisation of asylum seekers. Labor’s pitch is simple: even if you think we’re softer on asylum seekers than the Coalition, at least we’ll make sure a foreigner won’t take your job.

For the party that oversaw the industry policy reforms of the late ’80s and ’90s, which were all about sending manufacturing jobs overseas because we were no longer prepared to subsidise them, it’s quite an irony.

Not that the Coalition, when it’s not beating up on brown people, doesn’t have its own contradictions. Tony Abbott and Morrison devoted much of the 2010 election campaign to assuring voters they were going to reduce immigration, and vowed to slash net immigration to 170,000 a year (that came a cropper almost immediately at the press conference to announce the policy, when a journalist pointed out that projections indicated immigration was set to fall below 150,000 anyway). Abbott lauds 457 visa holders, football-transfer style, as people who are “joining the team and they’re making a contribution from day one”, in contrast to the way “the government is tolerating people coming to this country and going on welfare”.

Even with the government’s increase in humanitarian visas to 20,000, they are still a fractional contribution to our overall immigration intake compared to the 100,000 457 visa holders here every year.

But contradictions abound when you’re trying to exploit community fears about immigration. Especially when both parties are led by migrants whose families were economic refugees from the UK.

Then of course there are the Greens, who profess deep anger at any obstacles placed in the way of asylum seekers reaching Australia, but who have an abiding concern about skilled migration. Earlier this week, MP Adam Bandt attacked the Prime Minister’s comments on 457 visas as “hollow”, “a show” and “window dressing.” Only the Greens could be relied on to properly crack down on 457 visas by requiring proper labour market testing first. “The tough talk hides some big loopholes,” Bandt complained.

Thus we have a sordid triangle in which each party accuses the other of being soft on some particular brand of foreigner.

At least the 2010 debate, such as it was, over “big” versus “little” Australia had some coherence as a contrast of world views and visions of what sort of Australia we should be in coming decades. Remarkably, we’ve already plumbed new depths on immigration in 2013. Who’d have thought we’d be looking back at 2010 as a relatively high point of informed political discussion … 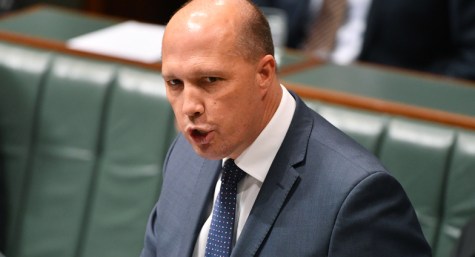 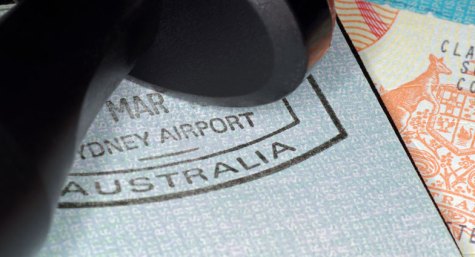 While I am far from convinced about the need to crack down on 457 visas I think the ALP simply hopes to muddy the waters here, turn an area where they are clearly being beaten in the polls by the libs into one where it might turn out to be an attitude of “they are both terrible”.

Good policy & logical arguments doens’t really metter to the voter who is concerned about the “flood” of immigrants, the just want to be reassured that those evil foreigners won’t ruin their way of life.

You have to remember these are the same people who think the govt should cuts taxes, increase spending and have a higher surplus.

I don’t see this the PM trying to exploit xenophobia. I think the PM is on her crusade about jobs and reassuring the westies that they come first. Demographer Peter McDonald (?) was on RN this morning talking about the issue. His view was that Gillard had got the policy right but that the public message was wrong.

the 457 debate should be about training young people for jobs..
this would require some sort of forward planning which has stalled due to privatised
utilities and the use of FIFO workers (fit in or fuck off )..
the use of visa workers gives the employer complete control over conditions..
start comparing real youth unemployment and the use of 457 workers in semi skilled areas..
my sister recently completed an extension of her house in Perth and the majority of the work was completed by 457 workers (tiling plastering roofing)
A lot of metal fabrication operations in Perth are completely staffed by 457 workers who work on pay per item..
the west australian newspaper ran adds for work in the Pilbara with the suggestion that the ability to speak mandarin would be an advantage …

JMNO – “His view was that Gillard had got the policy right but that the public message was wrong.” Isn’t that the case with a lot of what this govt does.
The question is can you blame the govt for the public message or the filter it is presented to the public through.
The last couple of weeks have been a classic example of numerous colaition contradictions and disasters being glossed over or ignored and trivial perceived govt problems (ie Why won’t the PM wlak the streets of Western Sydney or talk to the nut jobs outside her hotel) are made into national issues.
One example is how the rolling of Abbott’s preferred ACT candidate at pre-selection, if that was a Gillard back contender it would of been an attack on her authority and evidence of a party in turmoil, but for the libs it harldy got a mention.