Which govt pays writers to smear opponents? ... the inside word on Coke's anti-recycling putsch ... is the Green Guide staying Green? ...

Malaysia pays to smear. A fascinating story emerging from Malaysia, where the government apparently paid conservative opinion writers in America up to US$36,000 — from publications like The Huffington Post, National Review and Red State — as part of a propaganda campaign to smear the opposition. We wonder if any Australian journalists were offered the brown paper bag …? We can confirm Crikey, sadly, was not considered important enough to bribe.

You don’t have to buy rubbish. Our fizzy drink giants must be delighted to have killed off the NT’s recycling scheme, which aimed to reduce litter and preserve the environment. Nice one, Coca-Cola Amatil, Schweppes Australia and Lion Pty Ltd! They took the NT’s new scheme to the Federal Court and succeeded in having it declared invalid.

Ian Kiernan, chairman of Clean Up Australia, urged Tips to “say no to their products, that’s the best thing you can do”. Kiernan said they were “three very arrogant companies” and the situation was a “damned disgrace”. When asked what he’d do next, he said: “I’m going to burn down the Coca-Cola building, I am a moderate … It’s easy, we can do it.”

Phew! This is going to be quite a boycott. Tips might have to … shock, horror … drink from the tap. Jeff Angel from the Total Environment Centre said Fosters and Diageo should be praised because they had not sought to knock down the recycling scheme. So Smirnoff and Guinness are still on the menu, as are Carlton Draught and Bulmers cider.

James Lorenz from Greenpeace told us the Federal Court ruling only applied to companies that sought the action, so companies that didn’t try to kill off recycling will find their products costing 10 cents more (the scheme works by adding 10 cents to each beverage, then you get it back if you recycle it).

Some environmentalists are calling on people to affix “out of order” signs on Coke vending machines, but legal eagles told Tips this might be unlawful. It might constitute criminal liability as property damage (and possibly graffiti) in NSW and Victoria, and you could be at risk of breaching Commonwealth laws under the Trademarks Act. 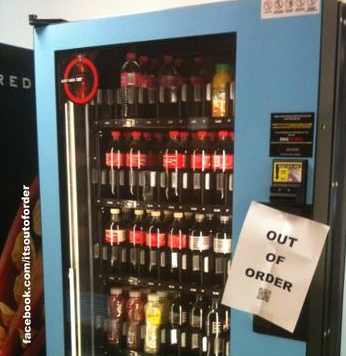 This might be illegal, so Tips would never encourage you to do it

All the three companies that struck down the recycling scheme talk big on sustainability on their websites. If any readers have the inside word on the legal case or how sustainable these companies really are, get in touch.

How green is The Age’s Green Guide … Howls of despair could be heard across Melbourne on the weekend when a mockup of the new-look Green Guide appeared in The Saturday Age. Could the TV and radio lovers’ bible — which is famous for boosting the paper’s circulation on Thursdays — finally be going white? Here’s the liftout as Age readers have known it: 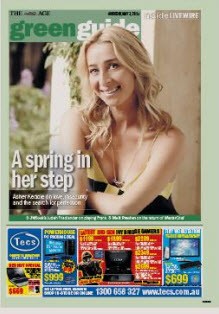 And here’s the preview from Saturday: 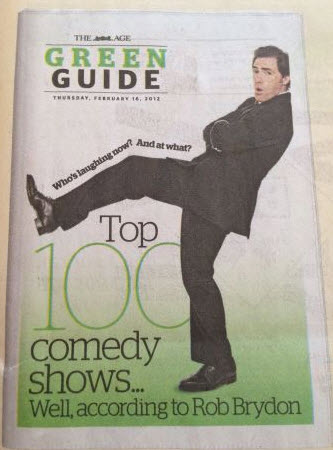 But fear not, Green Guide lovers. A Fairfax spokesman tells Crikey the iconic greenwash is here to stay. It appears the white mockup was out of date (a greener version is up online). Which is a relief — even though the reaction on the letters page would have been a sight to behold.

… while The SMH misses deadline. Not a good day for The SMH’s new-look tabloid — day two today, and we’re hearing of delays in home delivery. Several Sydneysiders told us their Fairfax papers didn’t drop on the mat until 10.30am (the problem affected The AFR as well as The SMH). We’re hearing newsagents aren’t happy because their home delivery costs double; they have to deliver News Ltd and Fairfax separately. “Production problems used to bedevil the broadsheet SMH, so shrinking the size hasn’t helped,” a media mole told us.

McKew v Gallop: the footage. Remember that Perth Writers Festival stoush between Maxine McKew and Geoff Gallop over the weekend that we told you about yesterday? Well, a Crikey reader informs us the debate — at least the on-stage part — is on YouTube. The quality isn’t great, but it certainly captures the simmering tensions …

Crikey clarifier: what does Coke have to do with NT recycling?

Tap water may not be exciting to drink but it boosts your immune system and antibodies.

I dunno Zut – there is a strong correlation between Dihydrogen Monoxide consumption and nealt every known illness to mankind: http://www.dhmo.org/

Shaniq’ua, I concede it’s not perfect but it sure beats sugar.