Hadley, Jones tumble in ratings. Sydney radio listeners showed their capricious side in the first ratings for 2013 (and the last to be conducted by the Nielsen group). 2Day FM lifted its overall share in Sydney and that of Kyle and Jackie O as listeners in the target younger demos ignored the prank call dramas […]

Hadley, Jones tumble in ratings. Sydney radio listeners showed their capricious side in the first ratings for 2013 (and the last to be conducted by the Nielsen group). 2Day FM lifted its overall share in Sydney and that of Kyle and Jackie O as listeners in the target younger demos ignored the prank call dramas to come in bigger numbers. But over on 2GB, Ray Hadley learned publicity is a two-edged sword and Alan Jones lost a large chunk of his still dominant breakfast share.

Jones dropped a significant 2.8 points to 15.4%, in the first survey, which ended last week. It was the lowest he has been for some time, while Hadley dropped a staggering 3.7 points to a recent low of just 14.9% in his morning slot. Hadley had made headlines in the final weeks of the survey after he was suspended by 2GB management after reportedly abusing a staff member, objected to it, went to owner John Singleton and got reinstated. Hadley later apologised to staff. But it is a salutary lesson to the king of the morning shock jocks: the audience knows there are limits to poor behaviour.

There’s still no proof the makeover at Fairfax’s 2UE is paying off. The station recorded an abysmal 4.1% audience share, down from 4.3% — though we’ll have to wait until the next survey for a definitive verdict on the new lineup launched at the start of this year. 2UE’s Breakfast show — now co-hosted by Ian “Dicko” Dickson — scored only 4.1%; Mornings, now hosted by Paul Murray, was even worse at 3%. — Glenn Dyer

‘Perspective’ a ‘social media apocalypse’. As we reported yesterday, the outrage over Fairfax tagging its female-friendly content “Women’s Perspective” on the new-look homepages of its metro websites was fierce. By the afternoon the title was scrubbed, reverting to the “Daily Life” brand from which it aggregates content. And it came with an extraordinary mea culpa from Daily Life editor Sarah Oakes, who slapped her bosses in revealing she argued against the name:

“This title was not Daily Life‘s decision. As the Editor I have waged an exhaustive campaign warning people of the social media apocalypse that would await us if it was called the wrong name. Begging to trade words like ‘female’ for ‘women’ or for us not to have a tagline at all.

“Sadly though, this campaign failed. It fell victim to a corporate need for a uniform approach, even when it proved nigh impossible to reduce Daily Life to a short, pithy label. But thanks to the rapid feedback of so many readers on social media, the conversation about what to call Daily Life on the news homepages has been reopened.”

Presumably Oakes sought permission from Fairfax management to issue the apology in a face-saving exercise. Nice to see reader-led decision-making at a storied Media House — however late it came for some.

The Oz takes care of its own. The Australian published its top 50 most powerful people in media list on Monday, with the unprofitable, low-selling paper’s editor-in-chief Chris Mitchell coming in at number 14. Some unlucky sod — there’s no byline — was tasked to write a profile of their boss (who topped The Power Index‘s journalists list last year for his crusading editing style). Here’s a sample from the fearlessly independent effort:

“Adhering to the credo that newspapers must know what they stand for, Mr Mitchell, 56, has combined his personal ‘inside-the-beltway’ smarts with an unyielding focus on building an audience of conservative, affluent readers beyond the chattering classes of inner-city Sydney and Melbourne.

“His strengths are classically journalistic: he loves reading, has a sixth sense for what decision-makers’ motives really are, has the stamina of a marathon runner and understands that conflict is interesting.

“He is equally feared (by politicians), loathed (by the left) and respected (by his most senior staff and proprietor Rupert Murdoch).

“Perhaps more uniquely among journalists, Mr Mitchell is a long-term strategist, confiding to colleagues for years about the importance of The Australian being the last major broadsheet newspaper.”

Meanwhile, business commentator Alan Kohler soared a stunning 18 places on the list. What changed in a year? He sold his business media publishing company to News Limited. As Gerard Henderson may ask: can you bear it? — Matthew Knott

Video of the day. Up-and-coming American filmmaker Travis Matthews’ drama I Want Your Love was granted an RC rating, effectively banning it from Australian screens. The film, which depicts graphic gay s-x, was due to play at festivals across the country. Now Hollywood has stepped in: Oscar-nominated star James Franco hit YouTube with a plea to Australian censors: 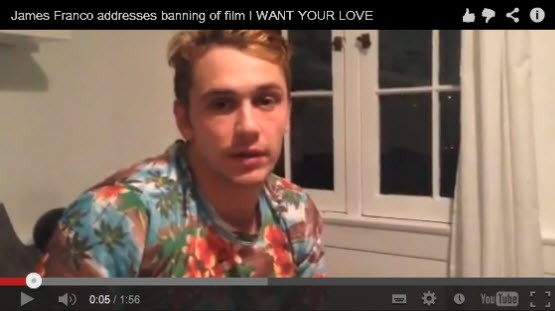 Franco, who has previously worked with Matthews, describes the banning of I Want Your Love as “hypocritical” and “disappointing”:

“Travis is making this film, including s-x, because he wants to explore story and character and the nuances that s-x contains. Because films have been banned because of s-x, s-x and films hasn’t had a chance to grow and become a sophisticated storytelling device. And frankly adults should be able to choose. They’re not going in blind. I don’t know why in this day and age, something like this — a film that is using s-x not for titillation but to talk about being human — is being banned. It’s just embarrassing.”

Front page of the day. Secret police recordings, the highest office of the Victorian government investigated, a premier losing the support of his party. The Herald Sun scoops yesterday and today on Ted Baillieu and his staff’s relationship with police have overshadowed The Age‘s transformation to “compact” form … 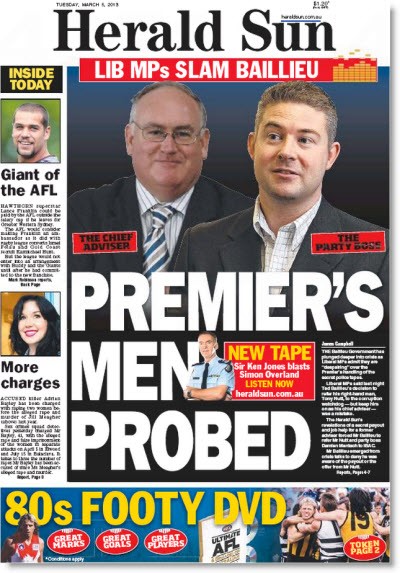 The new king of Sydney radio … the rise of crowdsourcing

Re Herald Sun
Since The Age went compact, the Herald Sun has beefed up its advertising s it must regard the compact as a threat. Copies of the Herald Sun were being handed out free at my railway station at peak hour the other day and on the railway station there are large new ads for the Hun and I don’t remember seeing ads for it before, or at least not recetnly