The verdict is in as Fairfax goes ‘compact’: <em>SMH</em>

Crikey has assembled a crack team of ex-editors and journalists cast their eyes over the new, compact Sydney Morning Herald.

After 181 years as a broadsheet, The Sydney Morning Herald today unveiled its new “compact” format. Crikey assembled a panel of former Herald editors and journalists to give their verdict … 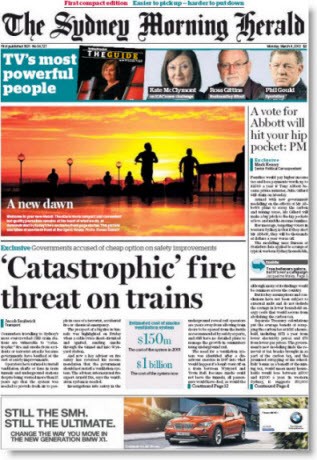 Media redesigns and relaunches are invariably over-hyped and over-engineered. Today’s new Sydney Morning Herald compact (don’t say tabloid) is no different, so the real test will be in a few weeks when the marketing money is spent, the launch advertisers are gone and the staff have been pumping out a 64-page newspaper five days a week. Will advertisers stick with the compact? Will the journos be able to keep up the pace? Will the readers like it?

But let’s not get too far in front of ourselves. It’s a brand-new day. It’s a brand-new look. And, overall, the SMH delivers. It’s clean, informative and engaging. My neurons were popping, taking in information all over the place. There are plenty of briefs, plenty of white space (the readers’ friend), and you can’t say there’s a lack of navigation. There are pointers to pointers. The designers, in particular, have done a good job. Inspired by guru Mario Garcia, the SMH‘s design chief, Matt Martel, deserves his page 19 picture byline and a share in the glory.

There are some low points: a sea of red and black type makes the team-by-team NRL preview impossible to read, and there are examples confusing ad/editorial layout (see page 16).  The Herald heartland will not like new TV guide (and I speak from hard-won experience) and the new place for Column 8 (I can’t find it, they’ll say). I also had a curious feeling that letters page is short on, well, letters.

I was not blown away by the front page. The pic, a glorious sunrise shot near the Opera House, is lovely, but its only news value is the headline: “A new dawn”. Then there are two exclusives. A preview piece on how the Gillard government is going to fight Tony Abbott looks like it came straight from the PM’s office “exclusives” tray, but it has some good data in it. The splash is a warning that Sydney’s trains face a “catastrophic” fire threat. The headline may point to creeping tabloidisation, but the yarn comes up respectably, though it’s unlikely to prompt immediate state government action or keep commuters off the trains.

The real sell on page one is not the stories or the pictures, it’s the people. Much thought would have gone into who to “puff” on the front page of this historic first compact edition. The Herald has gone with Kate McClymont, Ross Gittins and Phil Gould.  Good Herald faces, though Gould’s loyalty to the masthead waxes and wanes. Personally, I would have made the case for Paul Sheehan, who today writes on gay hate crime. Sheehan knows how to hit the button.

The case could be made for keeping the new dawn theme going and plugging slightly newer faces such as Jacqueline Maley, Adele Ferguson, Michael West or Rachel Olding. That’s another a new dawn and, if the truth be told, more people will be reading the SMH mobile edition than the new compact. But that’s a bigger story again.

Some years ago, as editor of The Australian Financial Review, I arranged a series of visits to a number of Wall Street firms in downtown New York. In the various conversations, I pulled out a copy of the tabloid-sized AFR to show them, explaining it was Down Under’s equivalent of The Wall Street Journal. In each case, the immediate reaction was the same: get this guy outta here, he’s a fraud. Such is the prejudice towards the “tabloid” format that no one in the US east coast establishment could do other than equate broadsheet with “serious” and tabloid with “racy”.

This morning’s first edition of the Sydney Morning Herald in its “compact” shape — Fairfax-speak for tabloid — is hardly racy. It’s full of the familiar fare that Sydneysiders would expect: a bit of politics, the latest in the Eddie Obeid scandal, world news. And it also has plenty of the familiar furniture that goes to make up that complex entity called a newspaper: crosswords, word puzzles (though little space to doodle), comic strips, etc. Noticeably, the news pics are run too small — their impact is lost — though the sports editor hasn’t fallen for the same “words v image” trap that comes with more cramped pages. The Daily Telegraph, by contrast, has Prime Minister Julia Gillard’s $1 billion road funding offer for western Sydney. Hardly a knockout yarn or the start of a great tabloid war.

SMH readers have been receiving all but the main news in tabloid sections for several years. So while it’s a mild surprise, it’s hardly a shock. The big shock will come when, and if, Fairfax decides that the significant revenue from display advertising in its paper products has dwindled too far. Fairfax still earns far more from paper advertising than it does from ads on its SMH, AFR and The Age digital platforms, despite all the hype from the techno-dudes.  But when the tabloid is under pressure to become a tablet, then the readers will really notice. And there won’t be any space for doodling. But that’s a couple of years off.

At first glance, it looks professional. There is a strong story count and crisp design. The trick will be to keep it up and manage the costs. Otherwise it’s probably a pit stop on the inevitable way to a digital only Monday to Friday, with weekend print editions.

All this naval-gazing about the size of the page, it seems to me, is entirely misplaced. The real discussion should be about the journalism — is it irrelevant to its core audience, is it boring, is it immensely predictable, is it singing off the wrong songsheet? To which I would answer yes, yes, yes and yes.

I know such views are sacrilege at Fairfax, where they simply refuse to hold their journalism to any kind of deep or thoughtful internal scrutiny, but someone they’ll listen to needs to tell them that their newspapers (regardless of platform) are anachronisms. Which is terribly sad, because there are sizable audiences of intelligent, curious people in Sydney and Melbourne — in the professions, business, government, the creative industries, IT, education and more — who would embrace and pay for a new kind of journalism that did not owe obeisance to the macho, gotcha, hold-the-front-page mentality that still, amazingly, lies at the heart of the Fairfax editorial mindset. The page size ain’t the problem, boys.

It is great that they have two exclusives on the front page. But the front page picture is incredibly dull on a day they should have a major splash. The pun — “A new dawn” — isn’t good enough. Column 8 is very hard to find. They had nine months of design research, and I’m wondering where it went. There is not enough activity on the page for me; my mind needs more exercise.

The real letdown for me is the story from the London Telegraph on page three about dinner party hosts ordering take-away instead of cooking. If you’re going to run a page three culture story it had better be new, but Australians have been doing this for a long time. The Herald has a great food and wine team; is this the best they can do?

The new compact Sydney Morning Herald could have been better. The first 10 pages have too many prominent ads and promotions and too few news stories.  This gives a feeling of thinness and lightness, which is compounded by the Herald’s recent preoccupation with crime stories. The crucial pages two and three were visually cluttered. The double-page spreads with no ads on pages 12-13 and 16-17 worked well, as did the later sections: World, Focus, Comment and Arts.

The Herald also tried to explain too much. It gave valuable space over to its transition and to self-promotion. These are teething problems. It’s quite possible to produce newspapers of substance in compact format, as we’ve seen in Britain.

The verdict is in as Fairfax goes ‘compact’: <em>The Age</em>

A tabloid? The only question, then, is who’s picture is on page 3?

“Carnivàle”?
(Just be careful putting your balls near those clowns mouths)

If the turd is put in a smaller box it is still a turd. It doesn’t smell any better, it doesn’t look any better & if you are stupid enough to swallow their rubbish, does not taste any better.
Hopping in the gutter with the other toilet paper is one thing; imitating it will see them in a race to the bottom of the bottom line. They wont be able to give them away.

Ron: Agree completely. Had to tear the sports pages off the main paper this morning so we could both have a read. Asked Fairfax to consider putting sport in lift out as per weekend editions. Having said that, standard of journalism continues to suck…