The Catholic Church has some serious soul-searching to do in the wake of Benedict's resignation to decide its future, writes Vatican-based journalist Desmond O'Grady. 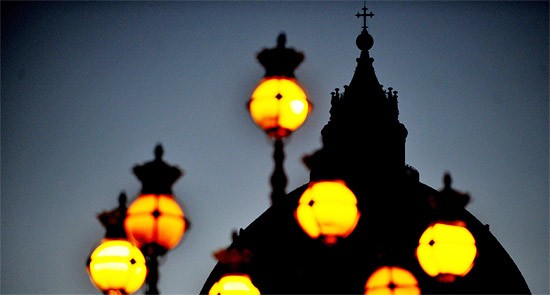 There are some 3000 journalists in the Vatican for the papal election, on top of the normal 476; terraces that have a view of St Peter’s Basilica, where the new pope will make his first public appearance, are being let to TV crews for 1000 euros a day; bookings for Roman hotels in the conclave period have spiked. Some have come to enjoy the demise of the papacy, others to celebrate its resurrection.

Today, the  cardinals begin their first formal meetings to decide when the conclave will begin and draw up an identikit of the new pope.

But many have already been meeting where they are lodged: Cardinal George Pell at Domus Australia, the guesthouse near Rome’s central railway station, which was opened last year, the United States cardinals at the huge North American College, others, such as the Germans, in the national colleges where they send seminarians to lodge while studying at Rome’s pontifical universities. In all this, linguistic affinities are important: there is a feeling among the English-speaking cardinals that the Vatican should pay more attention to the Anglosphere.

Two dossiers could influence the election, which takes place in the Sistine Chapel. One was compiled by the three cardinals appointed to discover those responsible for VatiLeaks, the theft of documents from the pope’s study and publication of some of them. It seems butler Paolo Gabriele, who took them, had accomplices. The report has been given only to former Pope Emeritus Benedict, but the Spanish, Slovak and Italian cardinals who compiled it can inform the other cardinals of their findings about the betrayal of Benedict.

The Vatican has put out a statement deploring media distortions of its internal affairs. Some journalists have given the worst possible twist to events, but several cardinal-electors have said they needed information from the three cardinals before voting,

A second dossier would also be influential: VatiLeaks led to increased spying powers for the Vatican gendarmerie (police) regarding all 1100 Vatican citizens and residents. The results of the phone and email intercepts are with Cardinal Tarcisio Bertonem who is in charge of ordinary administration until there is a new pope. A few years ago Dino Boffo, editor of the Catholic daily Avvenire accused Bertone of using smear tactics against him which led to his dismissal, a charge which has not been rebutted.

Bertone, accused of botching his job as secretary of state under Benedict, does not seem the ideal man to run the interregnum, nor does Cardinal Angelo Sodano seem an ideal choice to organise the conclave in his role as Dean of the College of Cardinals. He once described the priest s-xual abuse scandal as “petty gossip”.

But several of the cardinals who have just arrived in Rome want something done about the stench emerging from the church’s central administration, the Roman Curia, because of rivalries and murky finances. Others are disconcerted by Benedict stepping down. Some disapprove.

“While the cardinals are trying to find the next pope, Paolo Gabriele, the man responsible for VatiLeaks, seems to be enjoying life.”

Cardinal Stanislaw Dziwisz, who was secretary of  John Paul II and is now the archbishop of Kraków, voiced his disapproval at Benedict’s resignation: “A pope can’t come down from the cross.”

Even those who do not disapprove are uneasy about possible consequences — will it put future popes under greater pressure to step down if they are sick or take unpopular decisions? Moreover, having two popes at the same time has been one of the Catholic Church’s nightmares for centuries. But the new pope will have Pope Emeritus Benedict XVI living in the Vatican no farther away than a long golf drive. Benedict has promised obedience, but those who disapprove see a potential there for division.

Others welcome Benedict’s gesture, which he said was due to a lack of the energy to function adequately, as opening the way for an invigorated church.

Changes will be made. But there are different ideas of what is needed. For some a strong, competent secretary of state would ensure fewer gaffes by the pope, fewer scandals and leakage of documents and more efficiency. The conclave negotiations could concern not only who be chosen as pope but also which secretary of state he would have.

Other cardinals think the problem of governance goes deeper, that the papacy is too much for any one man, that the pope should take decisions with representatives of his fellow bishops and the Roman Curia. In the words of Cardinal Christoph Schonborn, Archbishop of Vienna, “a servant of the pope and not a substitute for him”.

Schonborn has been the most outspoken cardinal in his criticism of the Roman Curia. He figures in the list of papal possibles, which is made up of those who have the right combination of pastoral experience, knowledge of the Curia and society’s problems and the leadership qualities that will foster cohesion. The cardinals could choose someone from outside their group for this mission impossible, but they usually condemn one of their own members. Among the frontrunners are the austere Canadian Marc Ouellet who has experience in South America and heads the Vatican Congregation, which appoints bishops. There are several possible Italians, including energetic Angelo Scola, Archbishop of Milan, but he may be damaged because the current Vatican squabbles are attributed to Italian turf wars. If Latin Americans unite they could ensure the first Latin American pope.

While the cardinals are trying to find the next pope, Paolo Gabriele, the man responsible for VatiLeaks, seems to be enjoying life. Sentenced for 18 months, he was pardoned by Benedict. He now has a job in the administration of the Catholic hospital Gesù Bambino in Rome. The other day he was taking a bus near the Vatican, and several people approached to shake shook his hand because they recognised him from television: not a saint but a celebrity.

*Desmond O’Grady has been Vatican correspondent for The Washington Post and the  US National Catholic Reporter.

Stupid question, but why do we continue to follow this? I don’t see anything like the volume of coverage when the highest individual in Sikhism, Islam, Coptic, Hinduism, Anglicanism, gets swapped out. Why does Rome have such a disproportionate lock on our attention?

@trash. That’s because the “highest individual” in those “religions” either don’t exist or don’t rate.

Would that the Irish/American Cardinals had Desmond O’Grady’s perspicacity but then they can hardly help taking a princely (if a ecclesiastical one) view of the Papacy rather than a principled one.
Why are the mass media interested?
The fascination of the media with the Papacy and Vatican politics is easily explained. They concern an elected monarchy whose shenanigans down through the ages have not prevented it from establishing a mind-controlled empire with adherents on every continent.
Now that sex and abdication have come into the mix the Windsors are almost dull by comparison.

Attack on Catholic Church is beyond comprehension.
Other churches, equally powerfull and ‘controversial’ on many issues, (behavipural included) do not attract so much media attention. Just wondering…

What now for the Catholic Church? Same old, same old…