The word from Sydney's west: better highways, more hate. We're on the road with the PM. The Power Index returns: who's driving the green economy? Our panel of ex-editors on Fairfax's shrunken papers: do the compacts work? And Mark Latham defends himself -- you decide. 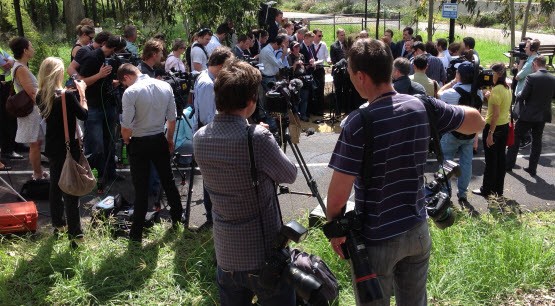 We’re on the road with the Prime Minister for the start of the meet-and-greet in western Sydney. Though our Sydney scribe is not convinced. Margot Saville reports:

So, are we in the throes of an election campaign? Let’s take this morning’s press conference as an example:

Held on the side of the WestLink, the PM’s announcement of major road funding was completely drowned out by the noise of the trucks going past. If the government wanted some serious analysis of the proposal they could have held a press conference in Canberra. So this was all about the pictures for the TV news tonight.

2. The presence of the Canberra press gallery

All the gallery journos are here but are unable to either hear the announcement or have the PM hear their questions. This didn’t matter because we had …

His unique ability to witter on about the differences between passenger and freight train times had its usual soporific effect.

4. The presence of several local MPs as a backdrop for the news

The PM was clearly well prepared as she wore a black pants suit and ballet flats. Those of us not so lucky were bitten on the leg by the world’s largest horse flies. Western Sydney may have too few roads but it sure has too many insects.

Meanwhile, the locals seem to be saying buzz off. More news from the  government announcement trail as it comes to hand …