Steady as they go. The markets expect the Reserve Bank to keep interest rates where they are at its board meeting next Tuesday. The Crikey Interest Rate Indicator this morning showed: Time travelling PM. Silly old me. I’m still an Oxford English dictionary man. I thought the PM’s Public Schedule would be a list of […]

Steady as they go. The markets expect the Reserve Bank to keep interest rates where they are at its board meeting next Tuesday. The Crikey Interest Rate Indicator this morning showed: 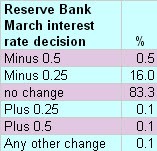 Time travelling PM. Silly old me. I’m still an Oxford English dictionary man. I thought the PM’s Public Schedule would be a list of things she was intending to do. As in this definition — “lists of intended events and times” (emphasis added). 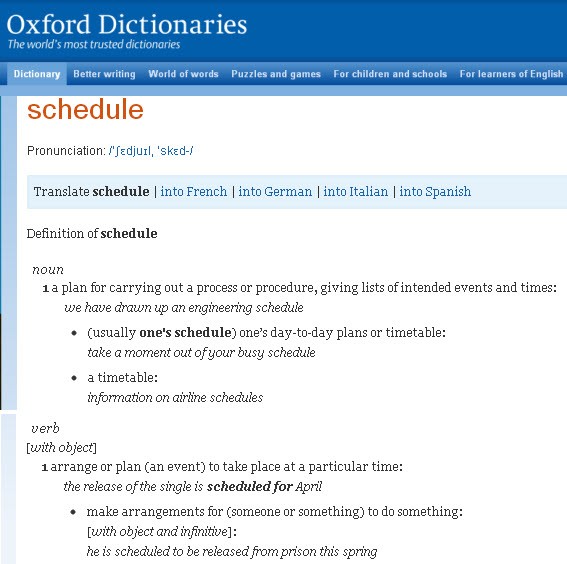 But it’s not so in the modern world of Julia Gillard. The schedule on her website is a listing of past events and times not current or future ones. Always has been and apparently always will be. John McTernan the prime ministerial communications boss told me so in an email referring to yesterday’s snippet about the website telling us where the PM was in this week last year, instead of this year:

“Just a note to say that there is actually a bug on the PM’s website. It means that when you look at the most recent week’s diary entry it brings up the diary from a year ago. Previous weeks are all fine.

The software guys have been working on it, but we are keeping the diary up to date. It has, however, always been retrospective – it has never been where you should go to find out what she is currently doing.”

So now we all know. With this Labor government don’t make the mistake of taking a word at its normal meaning.

A quotation for the day that, as a 70-year-old, I hope isn’t universally true.

Drinkers after my own taste. The research paper Player preferences among new and old violins was one of my favourite reads of last year. And now I notice that an international grouping of academics have cited it in another piece of important research Wine tasting: Is “terroir” a joke and/or are wine experts incompetent? Orley Ashenfelter(Princeton, USA), Olivier Gergaud (Bordeaux, France), Victor Ginsburgh (Libre de Bruxelles, Belgium) and Karl Storchmann (New York, US) argue that alleged experts repeatedly cannot tell a superstar wine from a cheaper bottle. Like many cultural commodities, it seems that the quality of wine is not an objective trait. Rather, these commodities become whatever we want them to become.

“But it may well be that the judges who contributed to the rankings are unable to judge, unless they can see the label of the wine. This is not much different from professional musicians who are unable to distinguish by listening between a violin built by Stradivari – which would cost up to $4 million – and a new US-made instrument worth a couple of thousand dollars (Fritz et al. 2012). As has often been shown, the neural representation of experienced pleasantness is determined by the knowledge of the price of a wine (Plassmann et al. 2007). That is, if we think a wine is expensive we perceive its quality as being superior, all other things being equal. This suggests that, on many occasions, quality is not an objective trait of a commodity, it rather seems to be what we want it to be.” 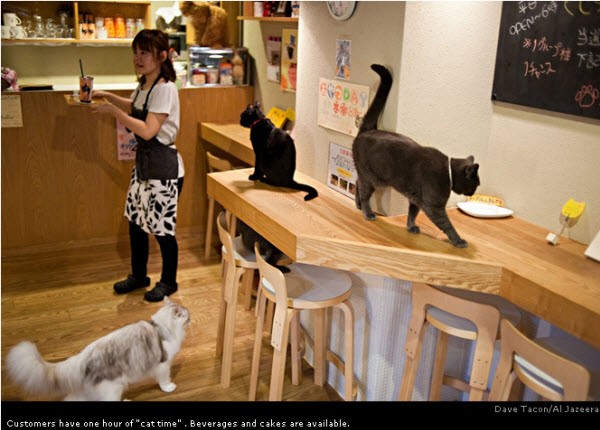 “Japanese love animals, but pets are often forbidden by landlords of the tiny flats where most people dwell. The solution: cafés where pet-less patrons pay $11 an hour to hang out in a room full of felines. Cat cafés are proliferating in Japan, serving up friendship for the lonely and curious – albeit briefly.  More than a dozen cats of all shapes, sizes, and colours populate the restaurants, as staff serve piping hot coffee and creamy cakes. Persians, Tabbies, and Siamese laze around, clean themselves, and eat cat food out of colourful bowls as patrons meet and greet them.”

The cat cafe is a great idea. Now for a dog pub!

Richard, I have to tell an 80 year old’s birthday party story. This Italo-Australian widow was being taken to dinner in the city by the children – baby boomers all. One of the sons had brought a bottle of Grange Hermitage for the celebrations completely forgetting one of Mama’s predilections. At the appropriate moment they opened the seriously expensive bottle and poured a glass for the birthday girl who immediately adjusted it to taste – 50/50 with Coca Cola.