We take a look at the good, the bad and the (litigiously) ugly of political campaign songs. While Aussie pollies have been reluctant to use pop singers, the playlist for UK and US campaigns rocks. 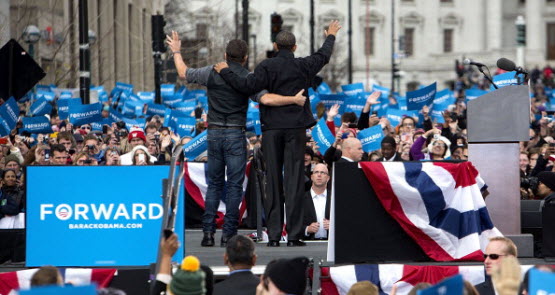 Australian pollies have rarely embraced pop music to rally supporters. Which might be for the best — campaigns abroad have copped legal threats from artists unhappy about having their tunes used to back candidates they hate.

In this federal election year we’ve loaded the good, the bad and the litigiously ugly from here and abroad into a Spotify playlist to nod along to the campaign songs stuck in our heads …

US presidential election — Barack Obama (2012): We Take Care of Our Own, Bruce Springsteen

Long-time Democrat Bruce Springsteen’s We Take Care of Our Own was Obama’s official song for his re-election campaign. The Boss campaigned with Obama (above, together at one campaign stop), and it seemed the song was mutually beneficial — sales of the single went up 409% after the President’s speech at the Democratic National Convention.

Jay-Z (whose wife may or may not have sung the American national anthem at Obama’s second inaugural address) came up with new lyrics for his song 99 Problems when he was campaigning with the President, changing the phrase “I got 99 problems but a bitch ain’t one” to “I got 99 problems but Mitt’s [Romney, Obama’s Republican challenger] not one”. The new lyrics weren’t entirely politically correct, though, as when Jay-Z raps: “The year is 2009, and the White House is mine / But the economy’s in full mother f-cking decline.”

Kid Rock campaigned with Mitt Romney and performed Born Free at the 2012 Republican National Convention. But he doesn’t want to be defined by politics. “I’m a little right-wing, I’m going to vote for Mitt Romney, but that’s where my politics end, in speaking to people that might listen to my music. If you’re not, it’s OK,” he told MTV.

US presidential primaries — Newt Gingrich (2012): Eye of the Tiger, Survivor

Rock anthem band Survivor was thrilled to be asked by Sylvester Stallone to write Eye of the Tiger for Rocky III after filmmakers were unable to secure the rights to their first choice — Queen’s Another One Bites the Dust. The 1980s power anthem band was less rapt, however, when US Republican hopeful Newt Gingrich used the song on his campaign trail without securing the copyright, and the band sued.

As the first Conservative Prime Minister since John Major, David Cameron brought change to the UK and thought Keane’s Everybody’s Changing would be a good song to launch the Tories’ election campaign. Too bad Keane didn’t agree. “Told the Tories played Keane at their manifesto launch. Am horrified. To be clear — we were not asked. I will not vote for them,” tweeted Keane drummer Richard Hughes.

Given Nicolas Sarkozy is married to a singer-songwriter, you’d think he wouldn’t have trouble finding a hassle-free campaign song. But instead Sarkozy used Kids, by MGMT, without the band’s permission. It was a €30,000 mistake, after the band sued for copyright infringement.

For his re-election campaign Obama made sure to get the artist’s permission, but the first time around he wasn’t so savvy. R&B crooner Sam Moore of duo Sam & Dave didn’t endorse Obama and demanded the campaign stop using his song at rallies, where his fans would sing “Hold on, Obama’s coming”. Moore also pointed out the song didn’t mean what Obama’s supporters thought it meant. “When the song was first recorded by Dave and myself, it was pulled off the market because it had such s-xual orientations,” he told The Washington Post. “I don’t want to get graphic with this, but how do you take a song about getting girls and turn it into a political thing? Somebody’s really desperate!”

US presidential primaries — Hillary Clinton (2008): You and I, Celine Dion

Hillary Clinton chose her campaign song by asking her supporters to do it for her. Celine Dion’s You and I was chosen after a month-long web campaign to select the perfect song to sum up the New York senator’s run at the top job.

Some might say Running on Empty was the perfect song for then 72-year-old John McCain’s failed campaign against a 47-year-old Barack Obama. Jackson Browne would not be among them. The liberal activist sued the McCain campaign for copyright infringement for use of the song (which was actually used by the Ohio Republican Committee, not the McCain campaign itself).

At the launch of New South Wales premier Morris Iemma’s campaign Australian Idol winner Damien Leith warmed up the crowd with the song Beautiful.  The song was a hit with supporters, but Iemma wasn’t — he resigned less than a year after his re-election.

Angie — what a great song for a politician named Angela, right? Wrong, said the Stones. “We are surprised that permission was not requested,” a band statement said. “If it had been, we would have said no.”

Bono, the Edge, et al, were not thrilled with Tony Blair using their anthem as his campaign song, but they weren’t in a litigious mood, either. The band issued a statement saying it didn’t endorse the Labour leader, but noted “we are flattered they like our tune”.

Dear oh dear, does anyone get permission from the artist in a political campaign? Blair used Fatboy Slim’s Right Here, Right Now at Labour’s conference in 2004. Slim (or Norman Cook to his parents) made it clear in the Sunday Times he had not been consulted: “I hated the idea that my mates might think I had sanctioned Labour’s use of the song.”

National Party leader Lawrence Springborg launched his campaign to the sounds of Van Halen’s Right Now. The American band didn’t campaign with the Queensland pollie, but there’s no record of a spat, either. Maybe Van Halen didn’t notice?

Maybe American bands don’t notice when Aussie state pollies use their work without permission, but home-grown bands sure do. Hunters and Collectors’ former lead singer Mark Seymour blasted the Liberal leader for using Holy Grail in the party’s campaign launch. “We are disgusted by the appropriation of our much-loved anthem by a political party that we utterly despise,” he told the Hobart Mercury.

The Lighthouse Family’s Lifted was used to sell Nissan Primeras and then later the Labour Party.

Kim Beazley’s failed challenge to John Howard in 2001 was best summed up by the hauntingly sad Gabriel’s Oboe theme, written for the 1986 Jeremy Irons movie The Mission.

US presidential election — George Bush (2000): I Won’t Back Down, Tom Petty and the Heartbreakers

George Bush did, in fact, back down — after Petty’s publisher sent him cease and desist letter for using the song in his campaign without permission.

Things got better for Blair and for the song itself — the 1993 ditty returned to the British charts in 1997 following Blair’s win, reaching the 19th spot.

The famously classical music-loving Paul Keating entered the great Hall on Capitol Hill to the triumphant “Jupiter” theme from Gustav Holst’s The Planets.

Perhaps no song is so associated with a politician as Don’t Stop Thinking About Tomorrow is with Bill Clinton. The song was everywhere in the US in 1992 (as was Clinton rival George Bush’s campaign song — Don’t Worry, Be Happy — by Bobby McFerrin).The song was used at the Democratic National Convention to introduce the future president, and he persuaded the band to re-form and play it live for his 1993 inaugural ball. Clinton has made the song something of a personal theme, as it accompanied his appearances at the 2004, 2008 and also 2012 DNCs.

*Want to win a three-month premium subscription to Spotify? Subscribers can enter via Crikey Perks — or sign up today.

In keeping with his party’s continuing, rascist paranoia Abbott’s election theme song: “I’m dreaming of a White Christmas (Just Like The One We Used Yo Know).

You left out Latham using Hunters & Collectors “Do You See What I See” at the 2004 Labor launch. A mate of mine was on staff and phoned me a couple of days beforehand in a panic because they hadn’t picked one yet. Sadly, they didn’t go for “The Cicada That Ate Five Dock”* or “I Like It Both Ways”**, so this had to do.

The Liberals under John Hewson in the 94(?) election campaign first tried to go for “Better Days” by Boom Crash Opera, who denied them the right, then they tried another song called “Better Days” by the Black Sorrows, who also said no.

Given Abbott’s terror of repeating the Hewson debacle of losing the unloseable, I’d like him to hear Paul Simon’s “Slip-sliding Away” at every available opportunity. Especially this bit:
“Slip-sliding away,
The nearer your destination, the more you’re
Slip-sliding away”

who let the dogs out.. by Morrison (not Jim)
I’m an arsehole… Tonys theme..