DFAT blues ... which born-again National is no fan of the party? ... Mega not going to The Guardian ...

DFAT blues. DFAT has had some budget cuts in recent years, and quite a few staff have left. We’re hearing rumours that the department’s IT budget has blown out and the passport section is “showing signs of strain”. If you’re a foreign affairs whiz with inside knowledge, tell us more.

Past words haunt born-again Nat. Richard Torbay thinks his area of rural NSW was turned into a “breathing corpse” by the Nationals when they held it in their sway. So it’s interesting that he’s running as a Nationals candidate at the federal election.

Torbay has been the independent member for the Northern Tablelands in the NSW Legislative Assembly since 1999. He’s won preselection for the Nationals to take on kingmaking independent Tony Windsor for the federal seat of New England this year. So we read this Torbay media release from 2004 with interest: 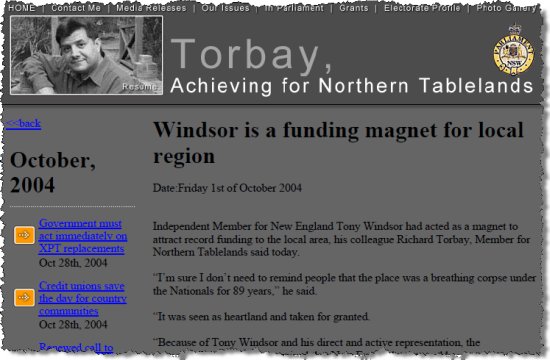 Mega for The Guardian? Don’t believe the chit chat in media circles that George Megalogenis, formerly of The Australian, will join Lenore Taylor and Katharine Murphy at The Guardian’s Australian venture. Crikey understands Mega signed a deal with The Oz stipulating he can’t write for rival outlets till the end of the year. He’s also busy writing books.

R&D perks. Here’s more from the seemingly endless stream of Tips we’ve received about companies who rort their R&D tax breaks (big business stands to lose these perks to pay for Julia Gillard’s manufacturing policy). This person is even dobbing him or herself in:

“We established protocols to make the operation of our mineral process plant ($100 million pa operating cost) an R&D tax claim. Just normal operational improvement, but framed as an experiment! Clever. Do you have a hypothesis to test? Good, you can have taxpayers’ money!!”

We’ve broken our normal rule of toning down excessive use of exclamation marks, to convey the tipster’s delight at rorting the system.