Benedict XVI leaves a series of mistakes and gaffes in his wake, writes Rome-based Australian journalist Desmond O'Grady, and it will be up to the new pope to achieve the reforms he failed to carry out. 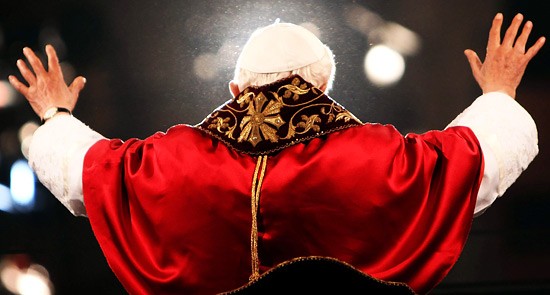 The cardinals set to elect the next pope could learn from the Italian political scene. Politicians who have been in office longer than some of the cardinals but failed to enact needed reforms have been stymied by this week’s election results.

In other words, opportunities for changes must be seized.

The need for change in the Vatican is recognised by Cardinal George Pell, who said that if Italian press reports about the document prepared by the three cardinals who investigated the “VatiLeaks” are accurate, there should be extensive changes. Other cardinals from outside Rome are also asking what the hell is going on.

But Italian journalists do not seem to have seen the unpublished report because their articles simply rehash old stories about Vatican turf wars, financial squabbles and an alleged homos-xual network. They also quote  Pope Benedict XVI’s frequent denunciation of divisions damaging the church — which have given a new twist to Stalin’s military taunt “how many divisions has the pope?”.

Benedict will hand the report to his successor, but the three cardinals who carried out the investigation after it was found the Pope’s butler had stolen hundreds of documents can brief the cardinal electors in the meetings, which begin on Monday. They are the lead-up to the conclave itself in the Sistine Chapel, which is expected to start the following week.

The VatiLeaks documents revealed considerable disorganisation and dissatisfaction in the church’s central administration, the Roman Curia, but were not all negative. Those referring to the removal of Bill Morris, the former bishop of Toowoomba, show that Benedict considered he was dealing with Morris on a fraternal basis without taking into account all the previous bureaucratic processes.

This touches on a major problem: popes can make favourable impressions during their visits to various countries, but too often the church’s central administration becomes a bar to a pope’s relationships with people.

Benedict’s reign was marked by a series of gaffes. He has been dedicated to tackling the question of how the gospel message can be made relevant in a society that considers it marginal.  He left the running of the Curia to his collaborators but chose them badly and then stuck with them. For instance, he has promoted handsome German Georg Gaenswein, his personal secretary, to bishop since the VatiLeaks scandal and has announced that Gaenswein will continue to serve him in his retirement.

He appointed the Italian Cardinal Tarcisio Bertone as his Secretary of State. Although jovial, Bertone did not have the experience for a post that runs the Roman Curia and the Vatican diplomatic service worldwide. Even when Benedict set the right direction, for instance transparency for the Vatican Bank, the 10R, a poor choice was made of Ettore Gotti Tedeschi to ensure this.

Mistakes were made about bishops: a man appointed as archbishop of Warsaw was accused of collusion with the former Communist government. He stepped down.

“Benedict … has not been decisive and has encountered dogged resistance to the reforms he initiated.”

The Vatican relaxed sanctions against one of the breakaway Lefebvre bishops, Nelson Williamson, only to backtrack when it found he was a Holocaust denier — information that was available on Google.

Benedict was slow to react to the s-xual predator priest scandal and has increased sanctions against them — but has not gone far enough. He has not been decisive and has encountered dogged resistance to the reforms he initiated. He found himself isolated in the Church’s central administration and did not bring in representatives of the world’s bishops to share in decision-making, although the Vatican Council, which ended in 1965, opened this possibility.

He said he had stepped down because he no longer had the energy needed to do his job properly in a time of accelerating change.

Can the 115 cardinals, most of whom were appointed by him, find the man who will have the energy and the vision needed to overcome divisions? Benedict seemed to be on the back foot without the hope that inspired the Second Vatican Council, which set a course for the 21st century.

Benedict’s decision to step down not only zeros all the heads of curial offices but, as he leaves by helicopter this afternoon to spend the next two months at the papal residence outside Rome (Castel Gandolfo), he gives the electors a chance to make significant changes. His stepping down is his most decisive act.

The electors will be looking for a man who combines pastoral experience with knowledge of the Vatican. He needs to be young enough to travel often, and intelligent enough to know that putting the right words in the right order is not enough. He needs also to be humble enough to know that the job is beyond any one man’s capability, and bring in representatives of the world’s bishops to collaborate.

At the last papal election only a simple majority was needed but this time a two-thirds vote is required. The electors can go outside the cardinals, but it is unlikely.

The Italians form the largest national group (28) and have several good candidates, such as the Cardinal Archbishop of Milan, Angelo Scola, but they rarely unite (division between two Italians candidates, Giuseppe Siri and Giovanni Benelli, opened the way for the election of former pope John Paul II ). The fact that 60 cardinals are European makes the election of yet another European pope probable but, if they go for a North American, Marc Ouellet, a Canadian who heads the Vatican Ministry for Clergy and who worked as a missionary in Latin America for years, could be favoured.

A Latin American pope is possible if their cardinals agree — Argentinian Jesuit José Bergoglio reportedly was runner-up at the last election but is unlikely to be selected eight years later. As the Church is thriving in Africa but squabbles at the centre, what about a developing world pope? Ghanian Peter Turkson has been mentioned, but the flavour of the month is the 56-year-old Archbishop of Manila, Luis Tagle. But he may have to wait for next time around. As to George Pell — it is likelier that he tries to be a pope-maker.

Benedict has a modest idea of the papacy —  before taking on the position he said that divine help only assured that the pope would not destroy the church. It will be needed this time to inspire a man with the courage to achieve what Benedict failed to.