Memo to Bono and TED fans: look closer to home for poverty

U2 rocker Bono gave a TED talk in California this week addressing global poverty. But has the wealthy TED audience found what it's looking for? California-based Australian writer Jason Wilson investigates. 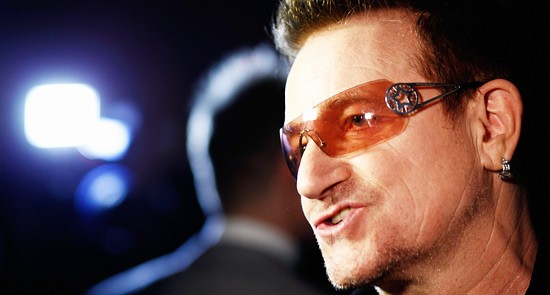 If you want a living demonstration of American inequality, the details of this week’s TED conference in Long Beach, California, might do the trick.

TED is a non-profit which aims to spread good ideas, through conferences, projects and a video site. In the conference’s fifth and final year here, attendees have paid US$7500 apiece to attend and soak up a week of “ideas worth spreading”. Tuesday morning, Bono (estimated personal wealth: US$600 million) spoke to 1400 other rich or otherwise privileged people about solving global poverty.

It would take someone on California’s minimum wage 937.5 hours to make enough money for the ticket price (many undocumented migrants work for far less than this). It is a shade less than the five-year decline in California’s real median family incomes to 2011, according to the latest census data (US$7726) — a figure that indicates the further disappearance of the American middle class. Long Beach’s unemployment rate is 11.5%, and benefits in the US are far more miserly than in Australia.

One block west of the Long Beach Performing Arts Centre, where Bono was speaking, charity workers were scooping out meals of lentils and rice from a big orange casserole dish. Many of the 30 or so homeless people they fed were clearly also suffering from untreated mental illnesses and other health problems that charity simply cannot address. A few blocks in the other direction, a disabled man who said he was a veteran was panhandling as young men milled around the LA metro stop near a discount shopping area.

It’s true that you didn’t have to show up to participate. TED was offering individuals and institutions like primary schools “TED live” online memberships for only US$995. It’s unlikely that Long Beach’s public schools will be taking that option, though — the United School District has suffered cuts that in 2012 alone meant $20 million in budget shortfalls. The City College and CSU Long Beach have had similar problems, as the state slashes public services following revenue crashes during the recession. Until the recent passage of Proposition 30, California’s constitution meant that no new taxes could be raised to address this shortfall.

Sure, it’s easy to point out the public squalor nearby to any glitzy cosmopolitan event. But that doesn’t mean it shouldn’t be done. And with TED, it’s actually quite important because of the organisation’s history of proffering apparently simple solutions to (or summaries of) complex social problems that tend to dodge or obfuscate the central issue of distribution of wealth.

Bono — who called himself as a “factivist” — described “soul-crushing” poverty in the developing world, where people live on less than $1.50 a day. It may be a problem on the way to being solved, and Bono said governments needed to act to further reduce this poverty. He didn’t discuss his native Ireland, where, as in most of the Western world, poverty has increased on every measure — as austerity bites, the poor, and especially the welfare-dependent, suffer the consequences. Public services have been slashed, including the educational services that remedy poverty. Above the “soul-crushing” threshold (the determination of which helps make poverty distant and African, not proximate) are millions of people worldwide who live in constant deprivation in unequal societies.

“To fix this would require either the reduction of the large fortunes of people like Bono, or a longer-term change in the way wealth flows through the economy.”

To fix this would require either the reduction of the large fortunes of people like Bono, or a longer-term change in the way wealth flows through the economy.

The common atmosphere in TED talks — and the reason Bono condescended to describing himself as being “s-xually excited” by data — is a kind of hegemonic wonkism. They share a common narrative: a problem that has existed in its present form since time immemorial is solved when someone does something counter-intuitive, or a clever geek takes a new look at the data. As a generic structure, this enables the promulgation of a political fantasy: that individuals can master and alter complex events without engaging in any serious conflicts over values or resources. But the world, as most adults know, is rarely so responsive to individual will — historically, the biggest changes come from concerted communal activism and social movements.

It’s not that TED doesn’t attract smart people — eminent sociologist Saskia Sassen spoke. And it’s not that some of the ideas presented aren’t worth hearing. But the problem is that TED’s basic format, and its generic traits, are depoliticising, precisely because they exclude debate. An illustrative example from TED’s front page yesterday is a recent talk to TEDx Thessaloniki by Edi Rama, the mayor of Tirana, Albania, from 2000-2011. Rama talked about how painting the buildings in the city bright colours reduced crime and bolstered civic pride, only briefly mentioning his “demolition of illegal buildings”.

He engaged in large-scale removal of informal and illegal businesses that had for a long time operated out of kiosks in public parks. He seized other private property in order to expand public space. Can we believe that this did not involve intense political conflict and principled resistance? Can we believe that there aren’t lasting resentments in the city, which doesn’t even have reliable drinking water? It may be that all of this was justifiable and necessary, but Rama is allowed to present his only real opposition as “corruption”. The paucity of alternative information available to English speakers allows his unchallenged talk to stand as a definitive record of events. There’s no debate here, and therefore no politics, only a deceptively simple solution — which might be just be deceptive.

In many ways, though, TED is consistent with the long history of liberal politics. It’s not just that it’s colossally smug and patronising — what, after all, makes an exclusive conclave of rich people think they have the collective knowledge to solve, say, the problems of poverty? But it’s also that what’s on offer is less ideas than reassurance — primarily the reassurance that our problems are reducible to a series of technical problems or lateral-thinking puzzles, and people like us — members of a cosmopolitan liberal elite — have the answers. Like all versions of liberalism, it tries to gentrify politics.

Needless to say, the TED program offers very little insight or discussion about what’s at stake in the US, California or LA County. The only idea I could find that is remotely concerned with this neighbourhood is a man who began a community gardening project in South Los Angeles. But unlike earlier kinds of paedagogical institutions, TED is not much concerned with the community that hosts it. TED is in the cloud. It’s an essentially rootless and mobile entertainment product: when it rolls up and moves to Vancouver next year, few traces of it will remain.

In defence of U2 (yes, really)

In the name of cash: U2’s Apple virus

Come on, Crikey is normally better than this! As much as I hate Bono, this sounds like it was written as devastatingly negative as possible purely because Bono was speaking.

– Having a lot of money yourself does not preclude you from being worried about African poverty, nor from wanting to do something about it
– As horrific as being poor in the US/Ireland/Australia/etc. is, and I know, I’ve been there, this is nothing compared to what being poor in Africa is like.
– Just because there are poor people next-door to where the TED talk was held doesn’t mean you can’t aim to reduce African poverty. There are plenty of problems to solve in this world, luckily there are lots of people looking at a variety of problems rather than everyone concentrating on the same one.
– Attempting to do something about poverty is imminently more worthwhile than doing nothing. Even trying and failing is more worthwhile. At least this teaches you about what may or may not work.

I like the idea of there being no discussion at TED talks. Not that I want to advocate for dictatorships, but particularly on topics like poverty, any discussion quickly descends into party politics. I’d rather see action. The tone of this article really should have been “will this TED talk lead to action?” or “are the solutions proposed workable and achieve their goals?” rather than “hey, isn’t Bono just a tosser!”

Well said!
I’ve always found it hilarious how the rich pontificate about the complex problems of poverty, when the primary cause if not having enough money (or other resources). there’s only a certain amount of wealth around and if you’ve got $600 million of it then someone else doesn’t.
With all that money a more effective way to alleviate poverty would be to give it to people who don’t have much – rather than talking about ‘the problem’.

When rich people don’t give a stuff then the commentariat berate them. When they DO give a stuff then the commentariat apparently feel entitled to complain that it’s the wrong stuff. Not only Shalt Thou, but Thou Shalt As I Decide. No! Don’t help them over there – help these over here. No, not like that – like THAT. What we really need, apparently, is a society where some “US-based writer and academic” gets to tell other people where, when and how to spend their money.

Utter piffle, from start to finish.

“….few traces of it will remain” is just not true.

TED talks remain alive on the web for years and are exposed to a massive audience – many presumably development practitioners like me – always on the look out for new possibilities to improve our life and work.

I’d defy anyone to view say Sugata Mitra ‘school in the cloud’ at TED 2013 and not conclude that promulgation of such ideas is not good for the planet.