Are giant spiders on the Aussie <em>Guardian</em> menu?

The Guardian is coming to Australia -- where giant spiders will probably kill you. Will the British care about anything other than deadly wildlife and local cliches? 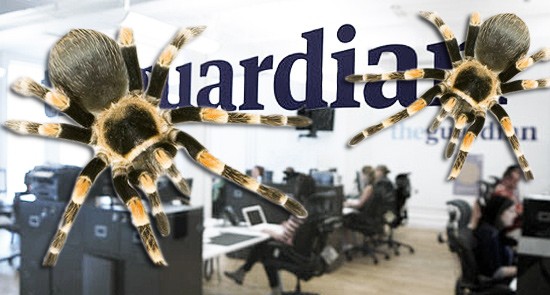 When The Guardian announced it would open an Australian online venture my first thought was “Will it be able to kick the habit?”. The anti-Australian habit, that is.

Aussies are a reliable target of jokes in the UK from all corners. From the Right, it’s simple snobbery. For the liberal-Left, they serve as a safe substitute for the real object of their disdain: the British white working class. Sometimes they damn us with faint praise, as holy innocents and lovable bumpkins.

The Guardian is the absolute worst culprit for this, and I was going to do a search and gather a few quotes to show people what they were in for. Fortunately, The Guardian has done it for me — in a piece by Rae Earl, a Liverpudlian, now resident in Hobart. It’s a masterpiece in a way; Earl hits every cliche of Brit reporting on Oz in a single one-page piece. Did you know the “spiders are big … dinner-plate-size arachnids can meander into your house”? (In Hobart? Did they fly in from Cairns to visit MONA?)

Or, that “Australian TV is “awful”? Here is the main channel line-up in the UK tonight: Supersize vs Superskinny (fat and thin people swap diets); Benidorm ER (fly-on-the-wall in a resort casualty department); Sun, S-x and Suspicious Parents (parents spy on their kids on holiday using concealed cameras); Flog It! Trade Secrets (I … oh god) — and Wednesday is the good night for TV. 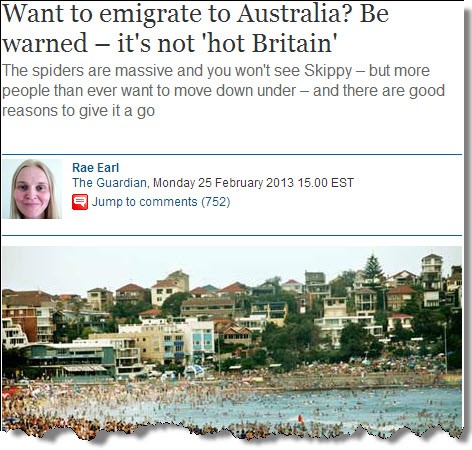 Moving on, there’s a dose of blatantly false folksiness:

“No horsemeat scandal here — most people can name the field or farm where their steak comes from.”

Oh yes, why who doesn’t check a pack of burgers in Coles to see the name of the cow they were taken from? Then we get onto the racism thing:

“Some people are openly racist in a way that would be unheard of back home.”

Unheard of? Racism? In Britain? In Britain of the riots? Of the deliberately bungled Stephen Lawrence case, and dozens of others? In the Britain of the Daily Mail? The Britain where a zero-immigration party (UKIP) can poll up to 15% of the vote? Please.

From the racism there’s a segue into bumpkinism, in a breathtaking passage:

“Australians — particularly my beloved Tasmanians — will cut off their arm to help you. Just don’t try to change things. They don’t want things changed. Or as one taxi driver said to me: ‘You could live here a hundred years and still be our guest. You’ll be treated like a guest but a guest doesn’t try to change the decor’.”

First off, I’m calling bullshit on that cab driver quote. Decor? The word is rarely used in Oz, whereas it’s common in the UK. It’s convenient yokelism. Secondly, Earl is living in Tasmania, a state that went from being the most conservative in Australia to being the most liberal, the home of the first Greens party in the world, the last state to decriminalise homos-xuality and the first place to try and ratify gay marriage.

Earl’s reportage is simply lazy and unresearched, in service to the cliche that generates an easy mood piece. “You are walking into a country, not yet sure of where it is going or who it wants to be aligned with …” Gaaaak.

Normally one would just move on from such a piece. They come out every few months, they’re always tiresome and lazy. The problem is the editor who would have seen this as a goer shares an attitude endemic through the organisation — Bloomsburyish condescension, borne of the narrow, insular group from which editors and journalists are drawn in an explicit class society.

How will the new operation’s parachuted-in editors handle the cultural shift? Will they listen to the “beloved” Oz journos they’re recruiting from Fairfax and elsewhere? Or will the staff all be sent out on a hunt for the great Tasmanian spider — after a quick refresher course at the masterclasses The Guardian is running?

We will watch with interest.

You arent wrong. They served up some cheap and easy tripe with an eye more to the audience at home than any Fairfax refugees they may be trying to corner there – but you may recall someone at Fairfax (also based in Tassie from memory) was recently arguing that a hatred of cats was a manifestation of our fear of things foreign. Let us not be too sensitive, unless laziness becomes a Guardian Australia habit – after all they include a number of Poms in Australia and you need to expect at least some Bloomsburyish condescension, until they get it out of their system.

Then again we could switch over to the endless backslapping or gargoyle worship of Uncle Rupert’s world.

To be fair, Australian tv is pretty poor.

I second the motion noting the awfulness of British free to air tv. It is worse than Australia.

Not bad Guy, usually struggle with your ramblings, but not bad…
As for Gina and Frey….stick to the subject…can’t stand to see another media group cop a bit of criticism without dragging News into it?