“A Gold Coast mum has set a Queensland record for drink-driving, with a reading of 0.425 per cent.”

Actually, don’t mark it in the record books yet. As The Townsville Bulletin reported in 2008:

“In 2006 a Gulliver woman, 39, was caught slumped behind the driver’s seat of her car with a blood alcohol concentration of .446, almost nine times over the legal limit.

“The highest male reading was returned by a Charters Towers man, 48, who was found unconscious behind the wheel of his car. His reading of .522, more than 10 times the limit, had to be determined by a blood test, because breath analysis machines only do readings up to .5.”

Seth MacFarlane’s cake-and-eat-it-too comedy. When Ricky Gervais rolled out a stream of snarky zingers as host of the 2010 Golden Globes, in turn generating a smattering of controversy and a spike in ratings, organisers of the Academy of Motion Pictures Arts and Sciences would have looked on with intense curiosity. Some said the 51-year-old British comedian’s “give the A-listers a hard time” approach went too far. Needless to say, he returned to the podium in 2011 and 2012.

When Family Guy creator Seth MacFarlane was announced as host of this year’s Oscars ceremony, the question was never whether his distinctly irreverent sense of humour would be tempered, but to what extent. Family Guy’s appeal has always been as a fearless hotbed of “went there” gags. Disabled people, fat people, drugs, p-edophilia … Nothing is out of reach in MacFarlane’s comedic universe. If there was ever any doubt, the writer/producer’s big screen directional debut, Ted, the story of a friendship between a grown man and his bong-smoking, hooker-hiring teddy bear, put this to bed on a well-soiled mattress.

A good example why MarFarlane’s shtick so often works was found in this year’s opening Oscars musical number. A weary-looking William Shatner, in Captain Kirk garb, beamed in a video message/conversation from the future warning MacFarlane of the terrible job he was about to perform and the subsequent “Worst Host in History” headlines, which turned out to be deliciously prophetic. — Luke Buckmaster (read the full story at Cinetology)

Front page of the day. The headline from Tuesday’s Il Tempo translates as “the paw of the jaguar”. But while Silvio Berlusconi might have clawed his way back into politics, the result remains a deadlock — and is spooking global markets. 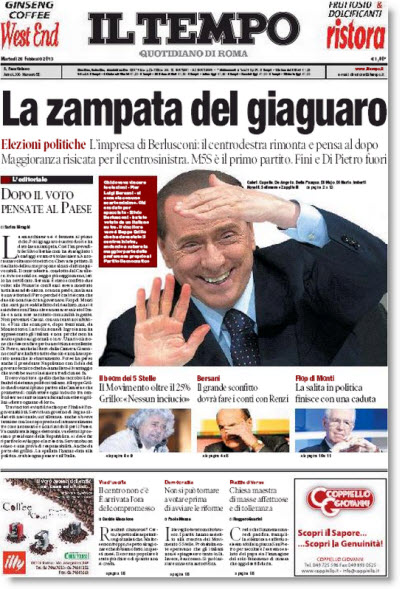