A thousand days in jail, and Bradley Manning still waits for trial

The US soldier charged with leaking classified information to WikiLeaks has been caught up in vindictive pretrial punishment, writes freelancer Stella Gray. Now he finally faces trial. 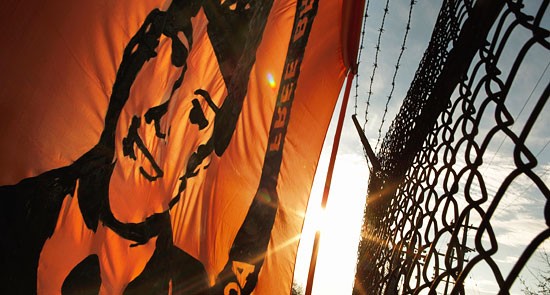 Bradley Manning — the 25-year-old soldier charged with the largest leak of classified information in US military history, hundreds of thousands of files allegedly transmitted to WikiLeaks — has sat through more than a year of hearings since December 2011 and has been imprisoned for even longer. As of February 23, Manning had been in a cell awaiting trial for 1000 days.

This week, a US military court has ruled against a defence motion that argued the case be thrown out due to a lack of a speedy trial. The preceding 1000 days have been a slow-burning bureaucratic saga of evidential obfuscation and vindictive pre-trial punishment, capped by a particular kind of secrecy not even seen in Guantanamo military commissions.

In addition to being historically significant in its own right, Manning’s case is one in a continuum of conspicuous targeting of leakers by the Obama administration. The US government has pulled no punches with Manning’s charges: aiding the enemy, espionage — 22 charges in total. President Barack Obama himself has already declared Manning guilty.

Along with charging whistleblowers under the Espionage Act, a signature prosecutorial tactic is to prohibit arguments over motive. Both of these features underlined the recent cases of ex-CIA officer John Kiriakou and ex-NSA senior executive Thomas Drake.

It is the Kiriakou ruling that Manning’s judge, Colonel Denise Lind, relied on to make her decision to preclude motive arguments at trial prior to sentencing. Lind’s reasoning was that all Manning required was “reason to believe” that information would be seen by enemy eyes. In this case, the government argues, the enemy is al-Qaeda.

Precluding arguments over motive unconvincingly sidesteps a widely disseminated historical record: the transcripts of Manning’s online chat with hacker-turned-informant Adrian Lamo. Manning allegedly told Lamo that his Damascene conversion from unhappy soldier to whistleblower was crystallised by his commander’s order to gather more intelligence on Iraqi dissidents. As an intelligence analyst, Manning was a deliverer of targets for his combat colleagues. “Everything started slipping after that … I started seeing things differently,” he said.

Although motive and proof of harm are separate legal arguments, by precluding argument of the former, the government has a duty to prove the latter. Tellingly, the government has fought zealously to avoid this. The government’s prosecution team, led by Major Ashden Fein, moved to prevent any handover of US State Department damage assessment evidence, and then contested the court ruling ordering it to do so.

Manning’s defence team, led by David Coombs, has written at length about the government dragging its feet in providing exculpatory evidence — a requirement under US criminal law referred to as “Brady” material — by taking up to two years just to hand over 12 pages in one instance.

The only way the government’s stalling on handing over damage assessments makes any sense, argued Coombs, is if there is no evidence of harm caused by the leaks.

The court also ruled last October on which remarks by public officials were admissible as evidence. Statements that were mostly dismissive about the effects of the leaks were ruled out from being presented as evidence at trial. It appears the more candid remarks by officials in the aftermath of the WikiLeaks cyclone, tossed to journalists without pre-rehearsed talking points, were ultimately more indicative of the impact felt by the government — an underlying truth that rankled Manning’s prosecutors. In January 2011, US government officials were already (anonymously) telling reporters that Manning’s alleged leaks had caused no real harm.

Arguably the defining hallmark of notoriety in the Manning case has been the conditions of his pretrial imprisonment. After his arrest in Iraq, a disorienting period spent in a dusty cage in Kuwait followed before his onward transfer to Marine Corps Brig, Quantico, in late July 2010. The ensuing nine months of his solitary confinement were relived in psychologically complex detail in a week-long December 2012 hearing, which included testimony from Manning himself. Placed under “prevention of injury watch” despite recommendations from the primary brig psychologist, Manning’s treatment drew international criticism, prompting his relocation to a medium-security facility at Fort Leavenworth.

In January, Lind ruled the suicide risk aspect of Manning’s confinement was unlawful, awarding him 112 days sentencing credit (off a possible life sentence).

Manning’s charges under the Espionage Act aren’t the only badge of the US information-gatekeeping zeitgeist. He is also charged with two counts of violating the Computer Fraud and Abuse Act — 18 USC 1030(a)(1) — for transmitting State Department cables to WikiLeaks. Manning’s defence contended that the government had “failed to state an offense” with these charges: as an army intelligence analyst, he already had legal access to the cables. (The court denied this motion in June 2012.)

The CFAA is a mainstay in several contentious cases of online civil disobedience. It is known as a “hacking” statute but has been invoked in an eclectic array of cases.

A US Congressional Research Service report published in December 2010 notes that the 18 USC 1030 (a)(1) section of the CFAA “essentially tracks existing federal espionage laws” and bars anyone from “wilfully disclosing” or “wilfully failing to return classified information concerning national defense [and] foreign relations …”.

The catch for WikiLeaks’ Julian Assange is that, should the US find it politically impossible to seek his extradition under the Espionage Act, a prosecution under the CFAA may suffice to get him on an extradition flight to Alexandria, VA, the home of the ongoing investigation into WikiLeaks.

Manning’s trial is scheduled for June 3. As Alexa O’Brien has noted, both the judge and his defence have acknowledged in oral arguments that the case will likely go to appeal. Whatever the outcome, the fight will be a long one.