The case for decentralisation — not everyone wants the CBD

Promoting “agglomeration economies” — or siting related businesses, amenities and industries close to each other — is now standard fare in planning strategies for cities. But not all players are on board. The federal government’s newly released State of Australian Cities report shows support for the idea, as does the Victorian government’s current metropolitan strategy discussion paper. And […]

Promoting “agglomeration economies” — or siting related businesses, amenities and industries close to each other — is now standard fare in planning strategies for cities. But not all players are on board.

The federal government’s newly released State of Australian Cities report shows support for the idea, as does the Victorian government’s current metropolitan strategy discussion paper. And there was the recent article in The Australian Financial Review, “Heart of the city remains the lure” by Jane-Frances Kelly and Peter Mares of the Grattan Institute. They quoted federal Infrastructure Minister Anthony Albanese saying housing continues to “creep outwards”, even though Australian cities are “shrinking in on themselves” as knowledge-intensive industries create inner-city jobs.

The authors say the reality is most people want to live near their inner-city jobs. Yet despite this trend we “continue to spread our cities outwards, as if the future of employment lay in manufacturing plants on the suburban fringe”.

I think many involved with cities often get a little hot and breathless about agglomeration economies. That’s in no way unusual — urban policy is inherently political and very susceptible to “the next big thing” syndrome.

It’s true firms value agglomeration economies — that’s primarily why they overwhelmingly locate in cities. They can draw on a bigger pool of labour; they can reduce transportation costs by being closer to suppliers and markets; they learn from each other through “knowledge spillovers”; etc. Being within metropolitan, very dense locations amplify these benefits for some firms.

But not for all, or even most. Many don’t like the high rents and congestion that come with very high density. So most locate further from the centre where rents are lower.

Although the Grattan article assumes it’s all about the city centre, the fact is only a minority of firms locate there. And it’s a small minority at that. 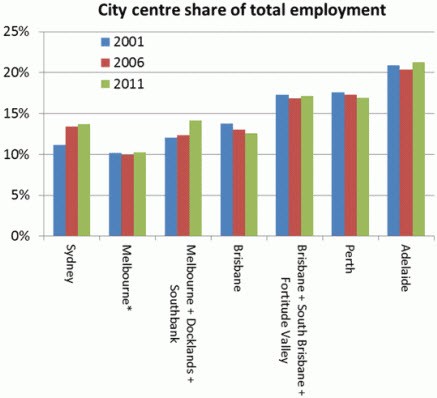 In Melbourne, for example, only around 10% of all metropolitan jobs are in the CBD —  the “Golden Mile” bounded by Flinders, Spencer, La Trobe and Spring streets. Include the new areas of Southbank, Carlton and Docklands — what I call the extended CBD — and it’s still only around 15%.

Not only is the proportion of firms that value the high density of the city centre quite small, but those firms are also very particular. They include corporate and government administrative headquarters and highly centralised institutions like the Supreme Court, opera houses and Parliament.

The sector that really benefits most from the high densities of the CBD is commercial services. It comprises the high-end functions of the finance, insurance, business services and property services industries. This sector accounts for a massive 54% of all jobs in the extended CBD (61% in the CBD proper) but just 19% of those in the rest of the metro area. It is far and away the most geographically centralised sector in Melbourne.

The Urbanist: will decentralisation of CBD jobs save the suburbs?