The camera doesn’t lie? Well it certainly can distort. Take this unflattering effort yesterday from the news.com.au website: To my pictorially untutored eye it is the deliberate result of some strange kind of lens or something. Whatever the reason it was enough to make that preview of this morning’s Newspoll the winner of the daily Chunky Bits […]

The camera doesn’t lie? Well it certainly can distort. Take this unflattering effort yesterday from the news.com.au website: 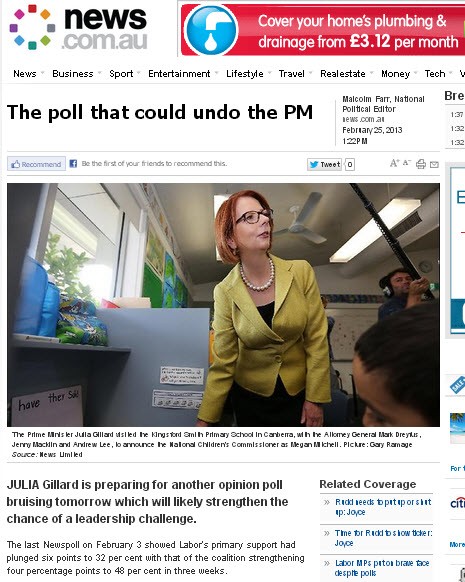 To my pictorially untutored eye it is the deliberate result of some strange kind of lens or something. Whatever the reason it was enough to make that preview of this morning’s Newspoll the winner of the daily Chunky Bits Daily Leadership Beat-Up Award.

The Oz wakes up. And on that poll, it’s as if those that matter at The Australian have finally woken up to Kevin Rudd returning to the prime ministership being a real threat to their crusade to see a Liberal-National government in Canberra. Plenty of page one coverage of the dismal results for Labor from the latest Newspoll but barely a mention of it creating the circumstances for a leadership switch. Instead this attempt to play down the significance:

“Newspoll chief executive Martin O’Shannessy said: ‘Newspoll’s ‘on balance’ view is that a change to Kevin Rudd may slightly improve the Labor primary vote but this would come largely from Green and other party votes that would have flowed, via preferences, to Labor in any case. This would limit the net benefit to Labor available from the change.’

So the PM’s going west. Prime Minister Julia Gillard will forgo her harbour-side residence of Kirribilli House for a hotel room in Rooty Hill next week, the Australian Financial Review reported this morning, as part of a five-day blitz of western Sydney designed to lift Labor’s plummeting support. I wonder. From my googled dictionary this morning:

go west: to become useless; to be destroyed — I’m afraid this jacket has finally gone west; That’s all hopes of winning gone west.

That upward blip for the Greens. I will be watching with interest to see how Newspoll’s finding of an upward movement in support for the Greens is fitted in with the prevailing wisdom of the commentators that the party is on the skids and losing relevance.

Don’t write off populist comics. The man with the hat will take comfort from the Italian election result. Comedian Beppo Grillo and his Five Star Movement were written off by the political pundits at the start of campaigning just like Bob Katter and his Australia Party. The Italian newcomers have come from nowhere to become of their country’s biggest vote getting party.

Credit where it’s due. Full marks to the weather forecasters for this prediction made nearly a month ago: 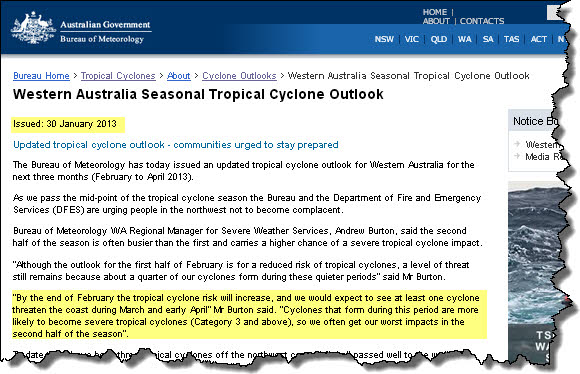 “VERY DESTRUCTIVE winds with gusts to 195 kilometres per hour are likely to develop in coastal parts between Whim Creek and Pardoo during Wednesday as Severe Tropical Cyclone Rusty approaches the coast.

“This is a large tropical cyclone and its slow movement is likely to result in an extended period of destructive winds near the track, with rainfall that is heavier than that associated with a typical system. During Tuesday and Wednesday widespread very heavy rainfall is likely to lead to MAJOR FLOODING in the De Grey catchment. Significant flooding is also likely in the Fortescue catchment and in Pilbara coastal streams.

Sophie Mirabella has the same problem at The Border Mail. There’s just never a good photo of her . . .

Please please please do not compare Beppe Grillo’s party with Bob Katter! They are worlds apart! Italy has been run into the ground with corruption, unemployment, tax avoidance, the Eurodollar and poor governance. His so-called populism is more an uprising of the people who cannot take their conditions any more. I hardly think that you can compare those socio-economic conditions with our country, unless you lap up the BS from the murdoch mudrakers who are only interested in regime change!

@klewso You’ve finished with them?