Thousands of Palestinians attended the funeral of Arafat Jaradat, who died in Israeli custody, with some political factions promising bloody vengeance. Nigel O'Connor reports from Ramallah. 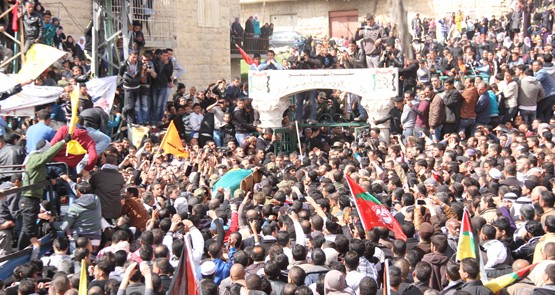 Clashes between Palestinians and Israeli forces continued across the West Bank on Monday, following days of escalating violence in the occupied territory.

In the village of Sair, near Hebron in the West Bank’s south, the funeral of Arafat Jaradat, who reportedly died during interrogation in an Israeli prison, drew thousands of mourners. Crowds lined rooftops and filled the central plaza, while supporters of all of the Palestinians’ major political factions made their presence known with flags and banners. With bursts of gunfire sounding, Jaradat’s body was carried through the crowd to the town’s cemetery.

Announcing Jaradat’s death in Megiddo prison on Saturday, the Israel Prison Service said he had suffered a cardiac arrest and resuscitation efforts had been unsuccessful. His family, lawyers and the Palestinian Authority questioned the official statement, and the resultant autopsy’s findings have been disputed by Israel and the Palestinian Authority.

Palestinian Minister for Prisoner Affairs Issa Qaraqa told a press conference in Ramallah on Monday the autopsy corroborated suspicions that Jarabat had died as a result of torture. He said there were “no indications that he died of a cardiac arrest”, citing “signs of beating and torture” on the body’s limbs neck, spine and face. Israel’s Health Ministry explained broken ribs on Jarabat’s body as being the result of resuscitation efforts inside the prison, adding that other than an abrasion on the chest there were “no signs of external damage”.

Family members of the deceased, a 30-year-old petrol station attendant, said he was suffering no pre-existing medical conditions prior to his arrest by Israeli soldiers on February 18 on suspicion of throwing stones during a demonstration. “We have our report, and they have their report,” said Issa Jabaran, a friend of Jarabat’s family in attendance at the funeral. “The body had broken bones and signs of being beaten badly.”

The funerals of Palestinians killed while in Israeli custody or by Israelis assume a profound significance as outpourings of grief combine with the national frustrations of an occupied people. With political posturing and religious ceremony, the body is carried from the family home to its burial.

Supporters of rival factions scuffled to display their political banners as the body arrived. Members of the militant group al-Aqsa Martyr’s Brigade distributed leaflets pledging bloody vengeance. Jabarat’s father was pulled from the crowded cemetery after he fainted in the heat and clamour.

The words spoken by those who knew the deceased are always strikingly similar. “Thanks be to God,” Jabaran said. “His family are proud for him to die in this way, and there are thousands here to honour him today.”

Jarabat left behind a young son, a daughter and a wife pregnant with their third child.

Prisoner rights is a unifying force in Palestinian politics, as Fatah and Hamas, who separately control the West Bank and Gaza Strip, struggle to pay lip service to a unification plan that would establish a unity government. In the past few weeks the unity deal has looked increasingly tattered as the issue of prisoners has assumed increasing prominence as hunger striking prisoners in Israeli jails have rallied demonstrators in support across the West Bank.

Widespread violent clashes between Palestinians and the Israeli military have escalated since Friday, resulting in dozens of injuries of protesters and an Israeli settler injured while driving.

On Sunday, Israeli Prime Minister Benjamin Netanyahu demanded Palestinian Authority President Mahmoud Abbas control the rioting in the West Bank. There have been several reports of PA police being confronted and attacked by Palestinian protesters when trying to disperse demonstrations in the past few days. The PA has limited authority in the West Bank, administering major towns and co-ordinating security with Israeli authorities.

The escalation comes as Netanyahu struggles to forge a coalition government after January’s national elections. On Sunday, the two largest bloc parties in the Knesset seen as providing the most comfortable partners for Netanyahu’s Likud-Beitenu, Yesh Atid and Bayit Yehudi, united on the contentious issue of military service for Orthodox Jews, providing further obstacles to securing an effective and coherent governing coalition.

Above these latest events looms the upcoming visit of US President Barak Obama, who will make his first trip to Israel and the Palestinian Territories as president in March. It is widely anticipated Obama will seek to further a lasting peace deal between Israel and Palestinians during his second term in office, and the prospect of enforced/renewed negotiations is being taken seriously by the leadership on both sides.

For now, despite talk of the beginnings of a Third Intifada, the latest violence is being used for political purposes. Netanyahu’s offer to hand over $100 million in withheld taxation money to assist in alleviating the PA’s financial crisis is made knowing what little control Abbas has over the violence. For Abbas, distraction from the unity deal with Hamas is welcome prior to Obama’s visit, further postponing already long-overdue parliamentary and presidential elections.

*Nigel O’Connor is an independent journalist based in the Middle East. He tweets at @nigel_oconnor.

Does anyone believe anything the Israeli Government or the US says.

This is just another step towards a regional war which will have been caused by the joint cancer of Zionism & US imperialism of the past 60 years.

With the US economy currently on a knife edge & within sight of a further deeper recession, I reckon Obama is going to Israel to tell Netanyahu that if Israel attacks Iran, the US will not be able to help it.

Kevin – I never cease to be amazed at how people still believe the lies of the Israeli and US governments but I am hopeful that the internet is helping people to see past the lies of the mainstream media.

I can only hope you are right about Obama. But I have my doubts. He is so under the thumb of the US Jewish lobby (you know the one that Chuck Hagel had to pretend doesn’t exist!) that part of me wonders whether he is going to Israel so that Bibi can explain to him in total secrecy how Obama must again betray the genuine interests of America by sacrificing trillions of dollars and the lives of ten of thousands of its best and brightest in a war for Israel’s racial supremacism in which it will hardly lift a finger.

Do Americans even know that while it is bringing home thousands of its soldiers in body bags and over 360,000 returning soldiers now suffer serious brain injuries; and its economy has been totally destroyed by these vicious Israeli wars that the Israeli economy has been growing at over 14% per annum?!

Kevin/Chris, agreed. The problem with the Israeli government (and Zionist interests), they don’t know who the enemy is (or maybe anyone who criticises the Israeli government is). Not only do they kill their own dual-citizens…er..sorry, allow them to commit suicide in a max security prison (a mean feat in itself for Zygier), but they cannot resist killing of the Palestinians without any consideration to the rights of the individual. One would think that, in reference to past historical crimes against the jews that their state would be the exemplary example of human rights.
Of course the US will support an attack on Iran eventually (Israel needs the air – air refueling capacity of the USAF to do it) and then the world will really know what has been wrought on us all. Israel is a rogue state in so many ways.

Dear MJPC – I know me writing this note which is just to agree with you is probably a rather sad indictment of the fact that there are no more than three of us agreeing with each other on this blog – but it is good to find solidarity however small in number when the bastards are so damn evil and immense, and apparently immune to criticism or even understanding by the great mass of western ‘humanity’ – if such is the right word for those still so obviously hooked up to their backbones to the fairfax and newscorp matrix, adn incapable of seeing the imense suffering being wrought in the name of Israel’s destiny.