The Prime Minister is heading to the suburbs of Western Sydney in order to help salvage Labor's plummeting vote. But just where will Julia Gillard lay her prime ministerial head each night?

Labor’s vote may have collapsed in western Sydney, but can five days living in a beige hotel room in “the Vegas of Sydney’s west” turn things around? Julia Gillard sure hopes so.

As Phillip Coorey revealed in The Australian Financial Review this morning, the PM is heading to Rooty Hill (home of the infamous Rooty Hill leaders’ debate in 2010) to spend five days hanging out with locals. There will be cabinet meetings, events with local ethnic communities and lots of talk on higher education and jobs. It all kicks off on Sunday with a speech by Gillard at the University of Western Sydney.

But just where will the Prime Minister and her team camp out, since they are (wisely) choosing to avoid the traffic on a nightly drive back to Kirribilli?

“There’s not an over abundance of accommodation befitting the prime minister in the area,” one local told Crikey this morning.

The assumption — the hotel is yet to confirm and the Prime Minister’s office declined to comment — has the prime ministerial entourage bunking down at the four-and-a-half star Novotel Rooty Hill, part of the glitzy Rooty Hill RSL Leisure Complex. Trip Advisor ranks it No. 1 among local hotels; it recently had a multi-million dollar upgrade and can sleep up to 650 guests in its white, beige and red-toned rooms.

A nearby Holiday Inn (three-and-a-half stars, self rated) or the Chifley Eastern Creek at Blacktown (where Gillard could stay in the fittingly named Chifley suite) seem the next best options.

Assuming no special discount was given (Crikey was told five days wasn’t long enough for a price drop, however Gillard’s negotiating skills are renowned) one bedroom apartments at the Novotel Rooty Hill will set the taxpayer back $245 a night. A few two-bedroom apartments are also available. 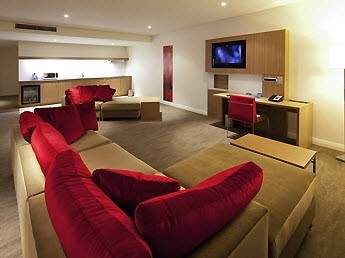 If Gillard and her crew want the buffet breakfast — which one Trip Advisor reviewer declared “to die for!” — it’s an extra $17 per person, although the WiFi is complementary.

There’s even undercover walkways between the hotel and the rest of the massive Rooty Hill complex so the prime minister can easily pop over for a schooner and schnitzel. The hotel also recommends the wagyu beef steak at Zest Wok n’ Grill. If her team needs to unwind after days of dealing with disillusioned western Sydney voters, perhaps a game of M9 laser skirmish or tenpin bowling will help.

Sadly Gillard will just miss Aria-award winning country sister act The McClymonts, who will perform at the RSL this Saturday night. However, she can try out the Tapas20 event “mouth-watering tapas in a relaxing and refined environment” on Thursday in the Club Lounge.

Although the pokie machines are plentiful at the RSL, we’re expecting the PM to avoid those in the same way she did Andrew Wilkie’s reforms.

As someone who grew up and now works in Western Sydney, I would have preferred reading a considered ananlysis of the strategy behind the 5-day tour instead of a patronising report on the hotel/meal/entertainment possibilities the PM will have in Rooty Hill.

I actually paid for this crap.

‘Try the wagyu’. What sort of nonsense reporting is this?

I’m not a great fan of Gillard’s but this constant belittling of her by fair means or foul is getting a bit much.

This so-called report was worthy of Women’s Day at best, The Herald Sun and Daily Telegraph at worst.

Usually a big fan of Crikey for reporting the real political stories and attempting to rise above the obvious media swill.

For the first time in a while I’ve questioned why I’m paying for a subscription after reading this ill-considered guff.

Lazy article that took the low road in preference to an analysis of why JG is on the campaign trail in the mighty western suburbs.