Tony Abbott gets asked the tough questions in Cairns, such as whether a swimming race would be the ideal way to settle the federal election, plus other media news of the day.

Ten’s hairy-chested bid for sport a loss. So Hamish McLennan’s first attempt to revitalise the struggling Ten Network is to get into a bidding war for sports rights such as cricket and tennis and pay wads of money to both sports for entertainment that will cost hundreds of millions of dollars and deliver little in the way of prime-time ratings growth? Nine holds some of the cricket rights, while Fox Sports/Foxtel has others (one-day, four-day and Twenty20 competitions). Seven has the main rights for the tennis, and Fox Sports/Foxtel have subsidiary rights.

The only way McLennan and chairman Lachlan Murdoch can win a major TV sports rights contract is with the financial assistance of News Ltd/News Corp via Foxtel and Fox Sports. Ten is already an affiliate of News, and Murdoch is chairman of the board and owns 9% of the company, supported by three other shareholders with more than 30% between them. More importantly, News Corp controls the most important parts of Ten’s prime-time schedule through programs made by Shine and Fox. Getting into a joint bid for sport like cricket or tennis with News/Foxtel/Fox Sports will mean even more of Ten’s programming is being paid for or produced, one way or another, by the Murdoch empire, at least in part.

McLennan’s first thought bubble about sport is a tired, blokey formula that has failed Ten already. How does McLennan think Ten can make money out of tennis and the cricket in summer and deliver prime-time ratings growth? Seven makes money because the tennis occupies two weeks in January. But the network has invested considerable amounts of money in the promotion, production and sports rights. Nine’s cricket does OK, but the big pay-off is the Ashes Tests every four years or so (this summer in Australia). — Glenn Dyer (read the full story here)

‘Welcome to the far north, mate’. The bad news when you’re a political leader is you have to go to places like Cairns. The good news is you get laughably soft-ball interviews from local radio jocks. Take Billy Bentley from Sea FM, who yesterday gave Opposition Leader Tony Abbott a mighty grilling. Here’s a selection of his questions:

“It is great to have you up in the far north. Firstly, what brings you?”

“Well, something that we have seen over the last seven days, Tony, especially when it comes to our health department, $103 million worth of Queensland funding was cut from our hospitals, in particular $6.5 [million] for the Cairns Base hospital, we have seen a backflip of sorts from the federal government. Also, over 200 job cuts we’ve been faced with in the far north. It’s hard to kind of handle, especially for those of course out across the far north. What type of resolution can we see in ensuring going forward for our health industries?”

No mention of those minor cuts from the Queensland government, of course …

“It’s hard to swallow. I mean, $103 million worth of cuts. I don’t know, can a Liberal government turn this around federally and, I guess, bring that assurance back to the people that have lost their jobs? I mean, imagine waking up this morning knowing you don’t have a job to go to?”

“We are talking about the September election. Do you think it might get called earlier? I mean, we’ve seen at the moment the polls aren’t really sitting favourably towards the Prime Minister. Are you confident that it might be called earlier and it could sit better for the Liberal Party?”

“That seems to be the case at the moment. Now, if it was to be a swimming race between yourself, Rudd or Gillard, do you feel like in a confident case, Tony, you could take them out, like that’s the way to sort the leadership going forward?”

Bentley ends the interview with a hearty “welcome to the far north, mate”. Abbott was certainly pleased to be there.

SMH readers fear Tele backlash. In The Sydney Morning Herald‘s inner-city enclaves they’re worried about what people will think of them when they pick up the slimmed-down tabloid version of the paper next week. Terry Charleston (concerned from Cootamundra) writes on the paper’s letters page today:

“The imminent transformation of the Herald into a tabloid edition will have one serious consequence for which this renowned publication is not catering (‘Try this for size: your Herald is changing with the times’, February 25). Readers of that other daily tabloid may mistakenly believe that we are reading it and not the Herald. Dedicated Herald readers need some form of identification so that we do not suffer this iniquity. With the first tabloid edition, readers could be supplied with a badge inscribed ‘I am reading the Herald‘. Dedicated readers would thus not suffer the embarrassment of being labelled a reader of the other daily.”

Another reader is worried about “the lighting of beachside barbecues”, “lining the car boot” and “protecting the dining room table from the craft spillage of young children” with the smaller pages. Fairfax is said to be reconsidering its decision.

Video of the day. Several feminists were horrified, but Seth MacFarlane largely managed to get away with singing about actresses getting topless to open yesterday’s Oscars telecast … 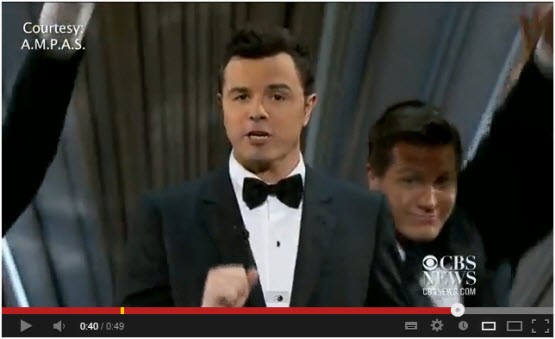 Front page of the day. The Boston Herald was pretty proud of local-boy-made-good Ben Affleck picking up the Best Film Oscar for Iranian hostage thriller Argo: 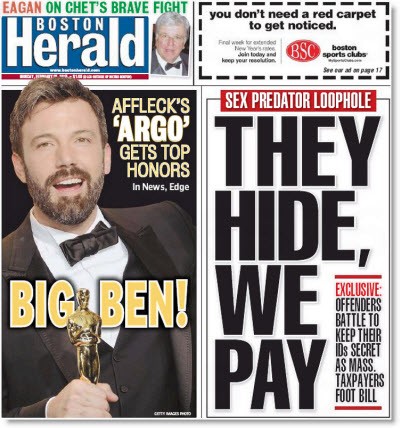 Bentley hasn’t worked for Singo &/or Rupert has he?