How Fairfax can read your mind. Really.

Fairfax Media has used neuro-testing, which measures brain activity in consumers, when developing the new compact editions of the Sydney Morning Herald and The Age. 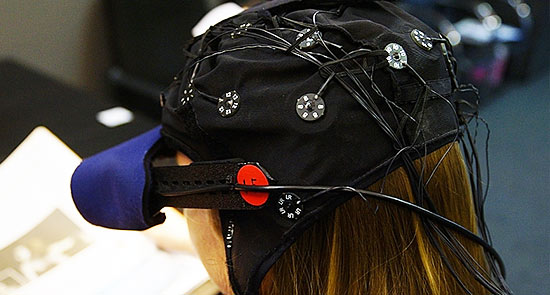 Last Friday’s marketing blitz unveiling the new-look compact editions of The Sydney Morning Herald and The Age came with a fascinating footnote. Fairfax Media used neuro-testing, which measures brain activity in consumers, when developing the new designs — a first for the newspaper industry.

According to Fairfax, eye-tracking testing by market research firm Neuro-Insight showed a 22% increase in reader engagement compared with the broadsheet and a 50% increase in visual attention to advertising.

And it isn’t only Fairfax getting in on the act. Channel Nine and SBS have previously used the firm; so have big companies such as NAB and Nestle. Last October, Channel Seven announced it had signed an exclusive deal with Neuro-Insight to use its brain-imaging technology to study how viewers respond to its programs and advertising.

The appeal behind such research is simple: to cut out the middleman — the consumer’s mouth. Unlike traditional research methods such as surveys and focus groups, brain mapping promises unfiltered data based on real-time observation, not recalled experience. It offers the chance to delve into the subconscious and discover what consumers actually want, not what they say they want.

But how much faith should we put in the results? Where does the science stop and the spin begin?

According to Adam Ferrier, Naked Communication’s global head of behavioural science: “There’s loads of potential with neuro-marketing, but it’s still in its infancy. Over the next few years, there’s going to be more and more interest in neuro-marketing, but at the moment it’s akin to guesswork. It’s not the panacea for understanding consumers.”

While Ferrier says brain mapping research provides “interesting food for thought to stimulate discussion”, he argues there is little evidence of such research leading to changes in real-world behaviour. And it remains “expensive and cumbersome” to use.

He’s far from the only sceptic. Writing in Nature last year, neuroscience professor Olivier Oullier argued: “Commercial services, such as marketing and lie detection, are already starting to make use of brain-imaging techniques. These services are over-interpreting the science. Although neuroimaging could help us to understand how people make decisions, it should not be sold as something that can predict or judge human behaviour. A brain on its own tells us nothing.”

“I’ve been in media for 30 years and I’ve never had such a depth of research available before.”

But Garry Linnell, Fairfax’s Metro Media editorial director, is a fan. “The Neuro research was helpful,” he told Crikey. “I’ve been in media for 30 years and I’ve never had such a depth of research available before. We’ve been working in the dark for way too long.”

Neuro didn’t have a significant influence on the overall design, Linnell adds. Traditional methods such as online surveys and focus groups were also used to help hone the compact design. “But it was important for all of us — including our sales team, too — because it underlined just how engaged our readers are with our mastheads. And how much more engaged they are when presented with them in compact form.”

Over a hundred people participated in Fairfax’s compact research — a much larger sample size than most neuro studies.

The results (see them in full here) certainly provide a useful selling point for Fairfax to justify its decision to maintain its ad rates — despite cutting page sizes. This backs up what one top marking executive told Crikey about neuro research: “It’s used by media owners to justify their form of media.”

Peter Pynta, Neuro-Insight’s director of sales and marketing, cautions against reading too much into the Fairfax results. It’s unclear, for example, whether the increased engagement result will hold true when readers become used to the compact format.

“We don’t have the answer to the question of what the novelty factor may be,” he told Crikey. “We won’t know that unless Fairfax want to track it.”

It’s also unclear whether increased engagement will lead to increased news stand sales. “The relationship between engagement and readership or circulation hasn’t been shown yet,” Pynta said.

In 2010, New Scientist magazine reported a 12% lift in sales for its August 5  issue after using neuro-marketing research to test for the most attention-grabbing cover. However, deputy editor Graham Lawton said it would be “unscientific” to credit the sales rise solely to neuro-marketing, given the issue was accompanied by heavy publicity.

According to Pynta, media players have been slower to take advantage of neuro-testing than those in the advertising industry, where neuro-marketing is increasingly in vogue. In 2011 Nestle used Neuro-Insight’s brain wave-tracking technology to sharpen the emotional impact of an Allen’s lollies campaign — a decision it said contributed to a 25% lift in sales in six months.

Neuro-Insight’s research, Pynta stresses, is not a “flash in the pan”: the firm has more peer-reviewed and published work that any other neuro-marketing firm in the world. The technology was developed by Professor Richard Silberstein, the foundation director of the Brain Science Institute at Swinburne University.

Asked about criticism of the research field, Pynta says: “The controversy has been a storm in a teacup driven by a) people who don’t know what they’re talking about, or b) people who it’s not in their interest for neuro to advance because they see it as a threat. People in focus groups, for example. They’re the first to throw a heap of dust in the air.”

Pynta agrees with Ferrier on one important point: the doomsday scenario of marketers eroding cosumers’ autonomy through reading our brains is a fantasy. There is no “buy button” in the brain waiting to be activated. “From a marketing perspective, it would be a fantastic to have to worry that your marketing could be too effective,” Ferrier said. “We’re a long way off that.”

Does this come with a free pyramid?

Does it provide 2-way transmission, eg, do we also get our daily dose of hot head-lines and brilliant copy by the same mechanism?

‘which measures brain activity in consumers’

Dumb question: Were the tests actually carried out using regular readers of the Age and SMH, or, say, people who don’t usually read broadsheet newspapers?