Food companies are not supplying nothing but the label and our outsourcing their reputations to shonky producers, and the MailOnline takes on the important issue of the world's cutest kittens.

Predictions as usual. There might have been a flurry of leadership speculation recently, but the only significant change in the Crikey Election Indicator is in the colours. At the urging of a reader Labor has replaced the Coalition as the reds, with the Coalition now in blue. As to the numbers, only a slight decline in the probability of a Labor win. 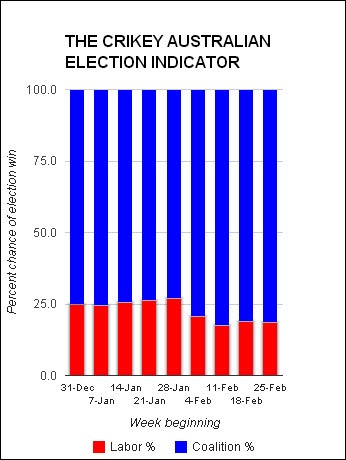 Over in the west there’s no sign yet that the market expects a Labor comeback. 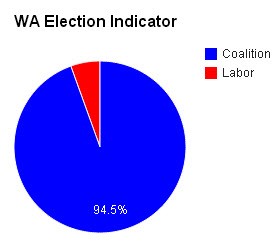 Outsourcing your reputation. There once was a time when food companies made things and then s0ld them. Not these days, it seems. As in so many other areas the organisations the public think of as manufacturers supply nothing but the label. The actual work is outsourced, and consumers are given no clue by whom, all because it is a cheaper way of doing business.

If quality control were not outsourced as well as the manufacture I suppose that would not matter. If we have grown up trusting Nestle because we trust the chocolate it makes in its own factories, we could reasonably expect some other product with the company’s name on it to similarly meet high standards. But what the recently exposed substitution of horse meat for beef in European frozen products shows us is that such trust is misplaced.

Major brands like Nestle, Birds Eye and Findus, along with a raft of house brands from major retailers, have all outsourced their reputation to shonky producers. And lost them.

The politics of bribery. My thoughts turned back to the Australian Wheat Board’s dealings with Iraq when I came across this election campaign comment from Silvio Berlusconi as he endeavored to have his party returned to government in the current election.

“We can no longer compete abroad. We’ve been shooting ourselves in the foot. No one will do business any more with ENI, or ENEL, or Finmeccanica. Bribery exists. It’s pointless to ignore reality. Paying a bribe abroad is a matter of necessity.”

Commenting  on India’s decision to suspend the purchase of helicopters following the Finmeccanica scandal, the former PM added:

“In Italy and in other democracies, such things do not exist but there’s no point in judging what goes on in India. That is just absurd moralising.”

And then for good measure came this:

“I have given you a snapshot of what goes on when Italy’s crown jewels have to deal with foreign countries, they have to adjust to other democracies. These magistrates have shown how to shoot yourself in the foot. We are ruling ourselves out. No one will negotiate with us anymore. This is sheer masochism. So we don’t want to pay commissions? Then let’s stay at home.”

“Bribery is something that exists, and you can’t ignore situations of necessity if you are going to negotiate with third-world countries or certain regimes.”

There are those at the AWB, and more recently the Australian Reserve Bank, who would agree with the sentiments. And at least candidate Berlusconi was honest about it.

A poll to the rescue. The tabloid drought broke on Saturday. Brisbane’s Courier Mail had paid for an opinion poll and by goodness it was going to get value from it in a way that made for a worthy winner of Saturday’s Chunky Bits Daily Leadership Beat-Up Award. 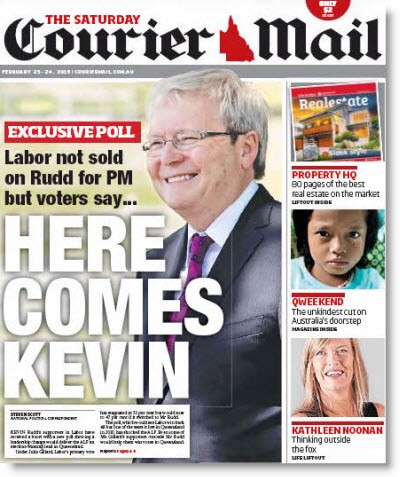 Nothing so dramatic about Sunday’s award winner, but Samantha Maiden deserves commendations for moving the leadership contest into a post-election context with this insightful analysis in the Herald Sun of who might vote for whom in a Caucus ballot for Leader of the Opposition.

The future of news. Will this be the direction of Fairfax websites when its newspapers go “compact”? The Press Gazette Weekly recently published this contrast between the MailOnline, which with 8 million visitors a day is Britain’s most popular, and its same day printed equivalent. 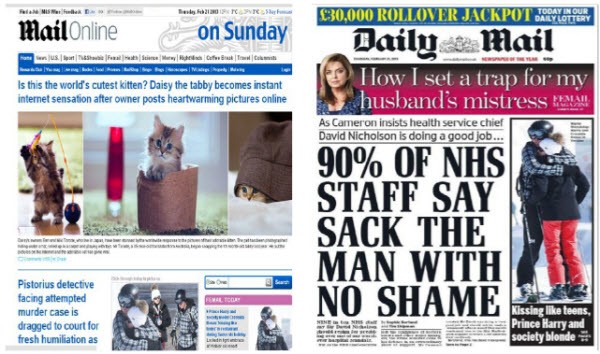 A final Oscars indicator. This afternoon’s Best Picture Oscar election is still a race in two, according to the Crikey indicator, but there has been a dramatic reversal in the order, with Argo clearly replacing Lincoln at the top of the probability list. 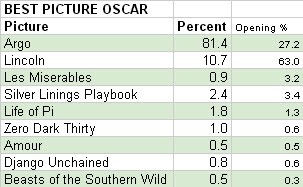 Would Rudd be a realistic candidate for Leader of the Opposition? If not, are Rudd backers talking about opposing Shorten after the election simply as payback for his not supporting their payback against Gillard now? Surely not in the ALP!

Another peacock, “Shortened Opposition”?
How long do they want to stay stuck there?