Prisoner X’s dual-nationality dilemma could one day be ours

As long as we care about "allegiance", with all its pre-modern baggage, the debate around dual citizenship is not going to go away. 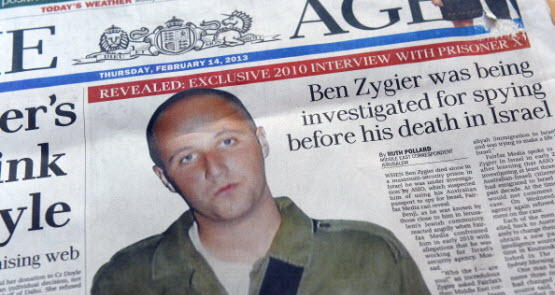 Almost two weeks after the story was broken by the ABC’s Foreign Correspondent, the fate of Ben Zygier — also known as “Prisoner X” and various other aliases — remains mysterious. But we know enough to know that it raises some difficult questions.

Zygier fell foul of the Israeli authorities as a result of something he did while working for Mossad, the Israeli spy agency. It appears that at the time he had some contact with ASIO, Mossad’s Australian counterpart, at a time when Australian-Israeli relations had been strained by the discovery that Mossad had used fake Australian passports in one of its operations.

The rest is conjecture. But even if the fairly natural conjecture that Zygier was imprisoned for something he said to ASIO turns out to be false, it’s been enough to set off a debate about the problem of dual citizenship.

For centuries, Jews have been the victims (not the only ones, of course, but the most widespread) of allegations of “dual loyalty” — that although they purported to be loyal citizens of the countries in which they lived, their primary loyalty was to “world Jewry” and its “sinister conspiracy” against Christian civilisation. (Catholics got a lot of the same treatment for being allegedly loyal to the Pope rather than their own governments.)

So the allegations against Zygier touch on a very raw nerve. Gabriel Sassoon in Haaretz refers to “Dreyfus-style allegations” and “a canard almost exclusively and reflexively leveled at Jews”. Critics such as Joseph Wakim counter that “we cannot turn a blind eye to the human traffic and ‘rites of passage’ between Australia and Israel”.

This all makes it important to be very clear that the problem here is not some abstract idea of “dual loyalty” but the very specific question of dual citizenship. Zygier got into trouble not because of his religion or ethnicity or national origin, but because he was simultaneously a citizen of two different countries, whose interests were not identical.

Not so very long ago, dual citizenship was an unusual condition. There was even a European treaty to try to minimise it, the 1963 Convention on the Reduction of Cases of Multiple Nationality. As I put it a 2011 article:

“In the classical model of citizenship, dual citizenship was rare and anomalous. Citizenship was inherited from your father; on the rare occasions it changed, it meant giving up your ancestral citizenship to acquire a new citizenship in the polity to which you (or more likely your parents or grandparents) had moved.”

Two particular factors have driven the move away from that model in the last half-century: greater equality of the s-xes, so that people now inherit citizenship from both parents, and the gradual disappearance of compulsory military service, which was the biggest reason to avoid conflicting obligations. More important than either, however, has been the march of globalisation, where people need and demand flexibility to move between countries without being hamstrung by archaic legal requirements.

In a globalised world, “citizenship” is on its way to becoming an anachronism. There are a handful of rights that we don’t want people to able to exercise in two different countries (voting, receiving welfare payments), but for most of the benefits of citizenship there is no reason why they should not be extended to anyone who wants to live in a country, and retained as they move around the world.

Nations now compete for the educated and the entrepreneurial; they no longer depend on a mass-conscripted infantry for their survival. Times have changed.

But what the Zygier case demonstrates is that our embrace of modernity has been incomplete. Our governments still have one foot in the feudal era, where “allegiance” meant an obligation to fight and die for your lord and master. Australia may have abolished conscription (although Israel of course has not), but we still have a law of treason and security agencies like ASIO to enforce it.

Zygier’s conflict was not (just) personal or emotional but legal and structural. He was in a situation where — at least hypothetically, and perhaps actually — he had specific legal obligations to two different countries, which could not both be satisfied. The second country happened to be Israel, and perhaps Israel’s difficult security situation made the problem more acute, but in principle it could have been anywhere.

That’s the problem that the world needs to address. As long as we care about “allegiance”, with all its pre-modern baggage, it’s not going to go away. Yet can we really imagine a world without the distinctive status of citizenship?

Zygier scandal: the journo in a deadly game of spy v spy

What were Zygier’s even hypothetical ‘specific legal obligations to two different countries, which could not both be satisfied’? One’s distinctive obligations as a citizen are incidental – to perform jury service and in Australia to vote and in Israel to serve the military. Aren’t the rest of the obligations about obeying the law and not undermining the government owed by anyone in the jurisdiction, without necessarily being a resident let alone a citizen?

Mightn’t Zygier’s conflict have been between his obligation to obey Australia’s laws – whatever his citizenship – and his employment by Mossad?

Gavin is right, here: being an Israeli citizen does not create obligations that conflict with Australian law – but if you want to serve in a foreign nation’s secret services, that’s obviously not compatible with retaining Australian citizenship.

This is much the same as the rule under which dual nationals must renounce their non-Australian nationality if they seek to stand for federal office.

Good questions. They’re hard to answer specifically because we don’t know just what Zygier is supposed to have done, but let’s say that in the course of his Mossad employment he came across something they were doing that threatened Australia’s security interests. If Australia was investigating that threat, and he refused to co-operate with the investigation, he’d be committing an offence under Australian law (with some caveats about self-incrimination, but assume that wasn’t an issue). But if he did co-operate, he’d be breaking an Israeli law. And you can’t say that’s only because he chose to work for Mossad, since it’d be the same if he just chanced to happen upon it as an ordinary Israeli citizen (it’s just less likely that that’d happen).

We’re all making a lot of suppositions here, but assuming the hypothetical presented, any person would be confronted with the conflict between Australian and Israeli law regardless of their citizenship or employment.

The real issue is not dual citizenship but many jurisdictions including Australia seeking to have their laws apply outside their territory.

Australia is breaking the law outside our jurisdiction by having spies and copsin dozens of air ports and sea ports around the world preventing asylum seekers from escaping to come here. That is a breach of the must fundamental human right of all.

Israel is the only so-called nation that has no constitution, no boundaries and is overtly and openly racist still as they incarcerate and imprison the owners of the land they are stealing yet every person in the world who claims to be jewish can move there, must sign up for the armed forces, can steal whatever they want from the owners and yet have the situation where they can be banged up in secret and die in a cover up.

Stop this insane and deranged archaic notion that because mother is jewish then children are and stop Israel allowing all jews to enter.

Then stop the indoctrination here.