The man hoping to knock off Kevin Rudd in Queensland has resigned his position as a "champion" for the NBN, which put him at odds with Tony Abbott.

The Liberal-National Party candidate agitating to knock off Kevin Rudd in September has mysteriously quit as a National Broadband Network “champion” as his local campaign against the former prime minister ratchets up.

Dr Bill Glasson — the former head of the Australian Medical Association and regular spruiker of the fibre optic network — was, until last week, a proud member of the NBN’s “broadband champions” who are “passionate about helping households and businesses to better understand how they can benefit from high-speed broadband”.

The leading ophthalmologist, whose name remains up in lights on the NBN website, has a storied history plugging high-speed internet, especially to forge advances in medical technology in the bush. He is the former head of the Regional Telecommunications Independent Review Committee, which produced the “Glasson Review”, which Rudd pledged to implement as prime minister. He is still listed on the NBN website: 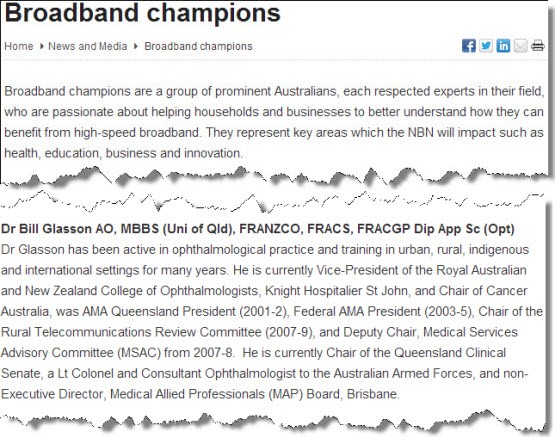 But now it seems his views have changed. Glasson campaign operations manager Katrina Ronne confirmed to Crikey today that her boss had abandoned his post last week: “There were some reasons in there that he didn’t feel going forward was the best approach.” When pressed for more detail, Ronne said she would have to ask the candidate, who was in surgery and unable to be roused.

While Glasson has been on the front foot, his Coalition comrades have been resolute in their opposition to the project, with Liberal communications spokesperson Malcolm Turnbull and Tony Abbott regularly accusing the government of cost blow-outs and calling for the NBN’s dumping or strangling.

When the NBN Co contract was announced in 2009, Glasson told the ABC the development was “exciting” and a “smart decision”. He said he “was looking forward to working closely with Stephen Conroy and government” to roll out the network into rural and regional Australia:

“We have to make sure … these broadband services extend as far into the heart of rural and regional Australia as we can get them.

“We have the responsibility to build the best project possible; this is the biggest infrastructure project that Australia has undertaken for the last 50 years, and it’s the most important one.”

In October 2011, a rapturous Glasson lauded the NBN as “an ambitious, nation-building project, but I’m particularly excited about the benefits to medical patients in Queensland and Australia”:

“Reliable high-speed broadband is a game-changer on many fronts. It will literally change the way we live: how we work, learn, do business, and receive health services. It will connect us in ways once unimaginable.”

“It adds to the confusion that Dr Glasson created last September by saying in response to questions about Liberal-National Party cuts to Queensland Health, including cutting more than 4000 jobs, that ‘it is my job to get out there and explain why people like Can-do Campbell has to do what he has to do’.”

Glasson was president of the federal Australian Medical Association from 2003 to 2005.

The opinion polls report that Rudd is very popular in the general electorate as a potential prime minister and while it is obviously quite different, something better than mere assertion is needed to convince me that he wouldn’t be equally popular as a member in his own electorate. So I predict Rudd will increase his margin in his seat at the next election.

The mandatory loyalty above credibility…